As completely avoidable frontline worker deaths grow, Harlem Hospital workers joined in solidarity with other frontline workers who have staged walk-outs and demonstrations demanding urgent access to PPE to protect themselves, their patients, and their families. 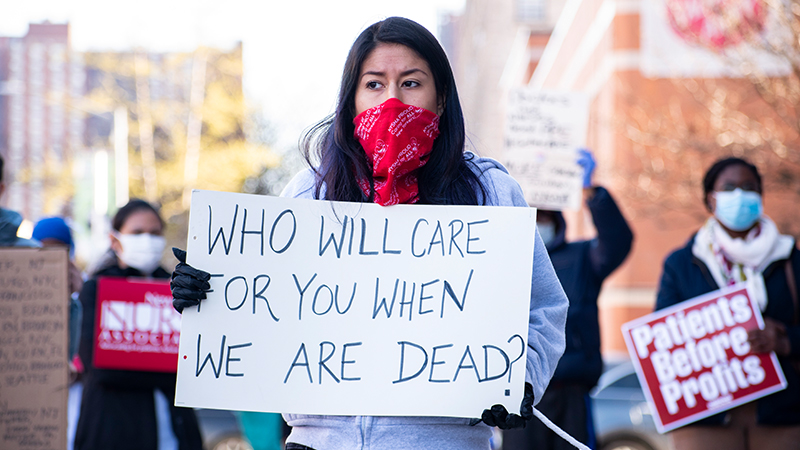 With the peak of the coronavirus epidemic potentially approaching New York City in as little as 7 days, a large group of Harlem Hospital workers participated in a demonstration to speak out against the lack of personal protective equipment (PPE) which has already taken the lives of dozens of other workers and threatens the lives of thousands of others.

Following a string of rank and file organized actions last week at Jacobi Hospital, Montefiore, and Mount Sinai Hospitals, including one organized by the COVID-19 Frontline Workers Task Force, these protestors wrote the names of frontline workers who’ve already died with chalk on the sidewalk and held signs that asked “Who will care for you when we are dead?”

In a state that is currently one of the epicenters of the coronavirus crisis, government officials are urging workers to prepare to work without protective gear (when it’s recommended to change gear after every patient) and pushing for cuts to Medicaid in the middle of a pandemic, and workers are taking matters into their own hands by organizing emergency actions to bring attention to their demands.

Some of the demands from Harlem workers included a new N95 mask for every shift (instead of one mask a week) , full 14 day paid sick leave, and a cessation of budget cuts to health care services, as well as broader demands such as the immediate nationalization of health services.

With a broken healthcare system that was designed to maximize profits at the expense of our health even before this crisis, calls for nationalization are particularly relevant for public hospitals like Harlem Hospital that have been hit the hardest by the current system’s inefficiency. Though public hospitals serve the most underserved patients, many of them working class, they are chronically underfunded and understaffed. COVID-19 is simply making things even worse at these hospitals.

At hospitals around the city, and at other workplaces such as Amazon, workers have been routinely fired and others risk retaliation for speaking out and demanding PPE during their assignments. But to mount a challenge toward the indifferent administrators and government officials, they are putting everything on the line to demand safety for themselves, their families, and their patients.

“We’re not here to cry,” Harlem Hospital rank and file nurse Sarah Isadora Dowd said. “This is a tragedy without doubt. But we’re here to fight because we deserve better.”

Tre Kwon, a nurse and Left Voice member who joined today’s action said: “Our CEOs and executives are in Florida in their condominiums – in their mansions – right now – they’re not even here dealing with the problem. We see that they’re totally extraneous, we can get rid of them altogether. Us workers, we’re the ones in the hospitals, taking care of patients, trying to save people’s lives.”