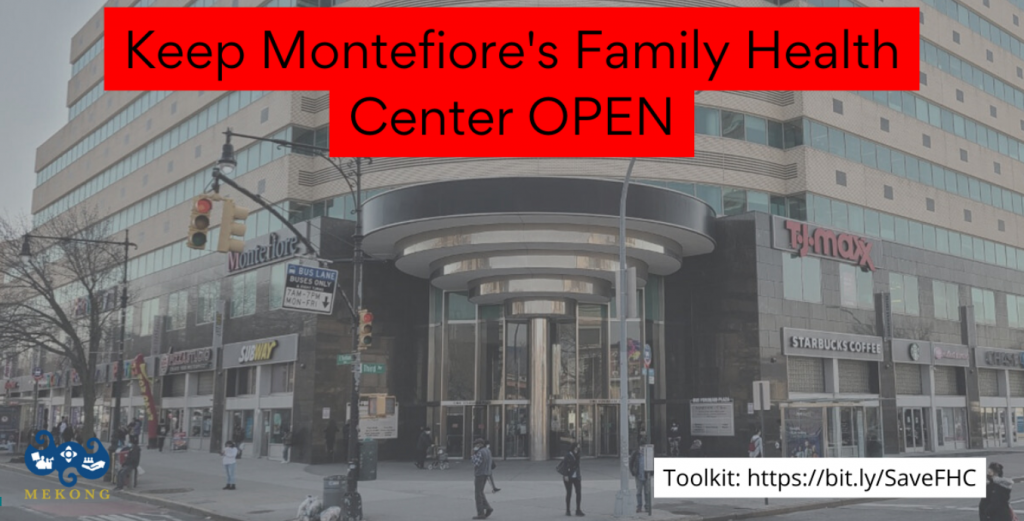 Montefiore Hospital System is set to close its Family Health Center (FHC) at 1 Fordham Plaza which has provided primary care to a community in the Bronx for over 30 years. At the same time, Montefiore is slated to open a large, upscale primary care clinic for wealthy patients living around Hudson Yards. This is healthcare under capitalism: shut down primary care in poor areas serving patients of color and instead open more profitable centers in wealthy areas serving predominantly white patients.

The FHC has been providing primary care services to over tens of thousands of low-income residents in the surrounding community, most of whom are Black and Brown/Latinx. The center also is one of the primary training locations of the Family Medicine department’s Family and Social Medicine Residency outpatient training program. Montefiore claims it is just “relocating” the clinic to a surrounding site over 2.5 miles away, but the hospital system has tried to keep this information under wraps — they know there is no space where they are relocating. In reality, they are shutting down the primary care clinic and replacing it with a more profitable, non-teaching internal medicine practice and pediatrics primary care clinic.

This decision comes after Montefiore’s corporate leadership hired McKinsey & Company (the company that advised Purdue Pharma around how to “turbocharge” opioid sales and helped fuel the opioid crisis) to make recommendations for increasing profits. The shutdown is part of a new plan to close clinics in areas like the Bronx and consolidate them.

While Montefiore shuts down primary care clinics in the Bronx, the hospital is rushing to open them for the wealthy in Hudson Yards in Manhattan. A recent job listing on their website boasts that “this brand new, state-of-the-art 10,000 square foot office offers 12 examination rooms, X-ray and ultrasound services and a fully experienced staff.” So, Montefiore has the finances to expand services into Hudson Yards, but peculiarly has to shut down one of its largest primary care centers in the Bronx.

Under capitalism, hospital systems like Montefiore throughout the U.S. continually try to find ways to shut down centers of care that are deemed “less profitable” and instead open centers that will make more money. This is part of a process of finding ways to extract the greatest monetary value from bodies and communities damaged by capitalism. At the same time, this creates more disjointed and poorer care overall for the most marginalized patients. It’s no surprise that under this racist economic system, the patients most harmed are Black and Brown patients of color.

Montefiore’s recent plan is not exclusive to this hospital system. The decision comes at a time when Kings County Hospital failed in its attempt to close its gynecology service which provided care to predominantly women of color in Brooklyn.

And let’s be clear: this is happening in a city and state where Democrats hold office. These are the same Democrats who pretend to care about public health, yet are letting primary care clinics that provide healthcare to tens of thousands to be shut down by hospital systems like Montefiore that, for all their flowery language about community, always put their bottom line over health and life. This is healthcare under capitalism.

Montefiore’s actions also come at a time when New York City is actively closing its public Covid testing sites, even as highly contagious variants spread. It comes at a time when not just the New York City state government, but the federal government and healthcare system more generally, are completely failing to address the ongoing spread of Monkeypox. If we had a healthcare system in the U.S. that actually prioritized health and well being, we would be opening more and better centers for primary care, not closing them down.

The community has already started to organize, recently releasing a petition about the planned closing, along with a toolkit about how to get involved called the #SaveFHC Toolkit.

Whether it is Montefiore trying to shut down primary care clinics for poor residents of the Bronx, Kings County trying to cut gynecology programs for poor people in Brooklyn, or healthcare systems continually failing to meet community needs, these instances only underscore how broken healthcare is under capitalism. Healthcare workers and patients must make the decisions about how the healthcare system runs, not corporate hospital executives or capitalist politicians.