Healthcare Workers Across France Went on Strike Yesterday. The Police Teargassed Them.

Tens of thousands of people in France — from Paris to Montpellier, from Lyon to Bordeaux — answered the national call of nurses on June 16. While French president Emmanuel Macron acted out his support for the health sector on Twitter, the demonstrations faced strong repression, particularly in Paris and Toulouse. 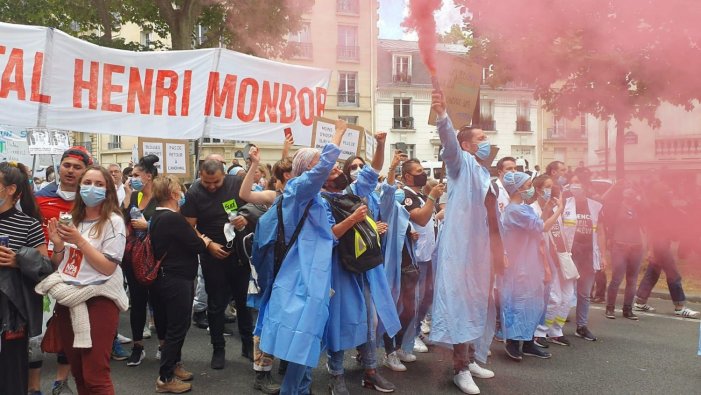 Healthcare workers are on the front lines of the fight against the coronavirus pandemic. A big majority of the public sees them as heroes. And even the politicians responsible for years of cuts to the healthcare system are promising support. But their working conditions are terrible.

Thousands of nurses, doctors, and non-medical hospital workers are fed up with this situation. They are ready to fight for their rights, and they have gotten support from other workers, students, and Yellow Vest movement. On Tuesday, they took to the streets of France’s biggest cities to demand more funding for public hospitals and the entire healthcare system.

More than 220 demonstrations and rallies were held across France in response to a call from the trade unions in public hospitals. The unions reported demonstrations of 30,000 people in Paris, 20,000 in Toulouse, 13,000 in Lyon, and several thousand in Bordeaux, Montpellier, Marseille, and Rennes. The first national mobilization of the health sector since the quarantine was lifted, it was an outstanding show of nurses’ strength and support.

Bordeaux: The June 16 demonstration brings out 8,000 people, according to the CGT. “Whose streets? Our streets!”

The head of the CGT union federation, Philippe Martinez, said: “Healthcare workers have been going on strike and mobilizing for months, and we still don’t have a response from the government. We have been waving at them from windows and balconies for two months. Even the President of the Republic has said that something must be done for the healthcare system and its workers. Yet nothing happens. It seems that he has forgotten his words of the last two months, and that is why people are in the streets.”

As one demonstrator said: “You can’t eat applause or nice words. To live and eat well, you need a job with a decent salary, more staff, and more equipment.”

Assemblies of workers have taken place since May 11, which was the last day of the strict lockdown measures in France. These assemblies decided to organize a national mobilization in 200 locations. A declaration by healthcare workers said: “The Covid-19 crisis has shown (if anyone was not yet convinced) that public hospitals are essential, and they need sufficient staff and equipment to meet the healthcare needs of the population.”

It continued: “We have to stop closing hospitals and reducing the number of beds, because people need hospitals close to their homes. The government has given billions of euros to private companies, and it can do the same with public health care.”

Crowds of Supporters Come Out in Solidarity

Nurses, who have been on the front line of the health crisis since the beginning of March, have taken to the streets in massive numbers, despite the constraints of their work. Large numbers of supporters came out to show their solidarity with these workers and to defend public hospitals. Together, they denounced the government’s criminal crisis management and demanded protective equipment — the lack of which has been revealed with a vengeance in the pandemic.

Gregory, an operating room nurse in Toulouse said, “It’s a big masquerade, not a real health plan! … If the government doesn’t listen to us, we’ll make our movement even stronger.”

Indeed, not only were nurses “sent to the front without weapons” — with huge numbers of them infected with Covid-19 — but they were also forced to make up for the lack of personnel and equipment by drawing more than ever on their own resources, by working overtime for no pay, by sacrificing their family lives in the middle of a crisis, and so on. Nursing students were forced into service by the government at a pay rate of only 1.42 euros per hour.1

For this “deconfinement of anger,” and despite tremendous fatigue, it was determination and solidarity that won the day. Joining the healthcare workers, people on the balconies above the streets came down to show their support and their desire for access to quality hospital services. Workers from other struggling sectors that are also standing up to the government — including teachers, railway workers, aeronautics workers, and energy workers — also showed their solidarity. All share in common that the government aims to make them pay for the crisis. Railway worker Anasse Kazib and college professor Diane both made this point in interviews:

Anasse Kazib said,  “I’ve participated in a lot of struggles, but this one is really special for me. To be asked to join by hospital workers, who have had to fight over no masks, no gowns … To be with them here — wow!”

Diane, college professor in Toulouse said, “We have to create a convergence between all the struggles, because only then will we be able to ensure that it’s not the workers who pay for the crisis, but the state and those responsible for it.”

Several components of the antiracist movement, which brought together more than 180,000 people last Saturday in Paris, sought to embody this convergence of struggles by expressing their support. They included the Adama Committee, the well-known actor and writer Almamy Kanouté, and Adama Traoré’s activist sister Assa Traoré, who revealed in an interview with Révolution Permanente that she had been hit by Covid-19. “This machine we’re confronting must be brought down together,” she said.

Macron Thanks Caregivers as Repression Is Unleashed in Paris and Toulouse

On the morning of the demonstrations, Macron tweeted a video in which he asked a group of workers from the French multinational pharmaceutical company Sanofi whether “morale is good” and thanked them for “staying on top of the crisis.” The tweet was accompanied by a note: “Investing in the health sector is an investment in the independence of France and Europe. It is a recognition of the excellence and know-how of women and men who have made health the commitment of a lifetime.” It was a brazen show at the very moment the mobilization of healthcare workers was going to be severely repressed in Paris and Toulouse — charged by the riot police, using tear gas and making violent arrests. In Paris, no fewer than 32 arrests were reported. Among them, at least one nurse was brutalized by police, who pulled her hair and left her face bleeding.

The woman in the white blouse, dragged by her hair during an arrest, ends up bleeding from her face during the demonstration. She repeatedly demanded her rescue inhaler.

The government has called healthcare workers “national heroes.” Yet it thanked those workers with police repression because they demanded more resources. More than ever, it is necessary to build a united front with all the different sectors in struggle to win quality hospitals, accessible to all, and more broadly an alternative to precariousness and repression.

First published on June 16 in French in Révolution Permanente.