The fight of healthcare workers against poor working conditions and a decreasing standard of living is expanding across the country. It’s time to broaden the struggle. 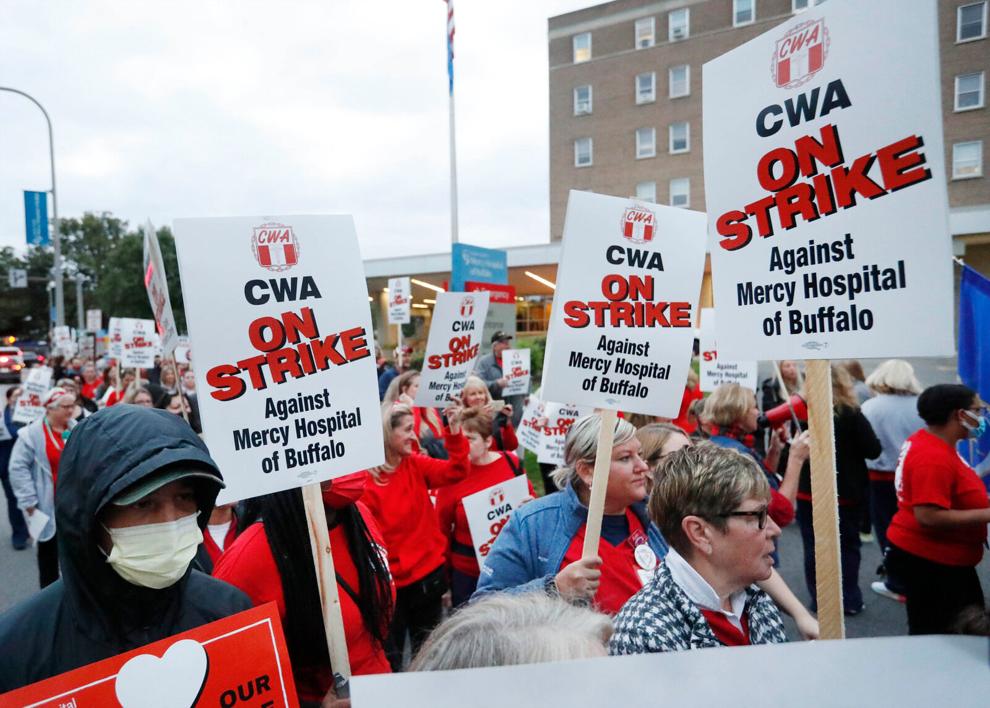 There is an uptick in labor struggles throughout the United States. As we reported last week, thousands of workers are on strike or are currently holding strike votes. For example, on Tuesday, October 5, over 60,000 film and television industry workers — members of the International Alliance of Theatrical Stage Employees (IATSE) union — voted, with 98 percent in favor, to authorize a strike unless their demands are met. Meanwhile, Kellogg workers who are members of the Bakery, Confectionery, Tobacco and Grain Milling Workers International Union​​ in four plants across the United States are on strike, pushing back against dismal working conditions, a two-tiered wage system used to further exploit workers, and company threats to move jobs to Mexico and Canada.

As workers across the United States increasingly straighten their backs and resist their poor working conditions and decreasing standards of living, healthcare workers are also beginning to say enough is enough. This is occurring in the context of their contracts expiring after these workers have been putting their lives on the line throughout the Covid-19 pandemic, which has caused a major shift in the working class as a whole seeing itself as truly essential. Workers want to be appropriately compensated for their labor.

In a weekend vote on October 9 and 10, around 24,000 registered nurses and other healthcare workers at Kaiser Permanente in California and Oregon — members of the United Nurses Associations of California/Union of Health Care Professionals — authorized a strike to resolve chronic short staffing and improve mental health services for workers. More than 2,000 healthcare workers in Buffalo, New York, recently began an open-ended strike over poor staffing ratios that their employer, Catholic Health Hospital, refuses to address. Meanwhile, 700-plus nurses at Saint Vincent Hospital in Worcester, Massachusetts, have been on strike for more than seven months, citing chronic staffing issues, which have only been made worse during the pandemic. These workers, called “heroes” throughout the entire pandemic by bosses, politicians, and the corporate media, recognize the hypocrisy of the executives at their workplaces now refusing to give them what they need.

Strikes Are the Working Class’s Most Effective Weapon

As a healthcare worker myself, I find this growing number of striking healthcare workers particularly inspiring. When I was working as a resident physician in Family Medicine, our union, the Committee of Interns and Residents (CIR), entered into new negotiations with our employer. Our key demand was for a new contract with reduced work-hour limits. Currently, the Accreditation Council for Graduate Medical Education (ACGME), the national organization tasked with protecting the rights of resident physicians to safe workplaces, sets work limits at 80 hours per week averaged over 4 weeks, with no maximum weekly limits, and a maximum shift length of 28 hours. Such conditions clearly lead to poor physician health and poor patient care. As our employer stalled in negotiations, we decided to threaten a strike if they did not come to the table. This led to us winning an in-contract reduction in work hours. It is clear how powerful a strike is as a tool for the working class. Even just the threat of a strike forced our employer to concede.

Obviously, poor working conditions and long hours extend beyond resident physicians. They permeate the entire healthcare system. Frankly, for most healthcare workers, it’s really no surprise when we hear about poor staffing ratios and overall working conditions at this or that facility across the country. Even before Covid-19, healthcare workers noticed how our workplaces — hospitals, outpatient clinics, urgent care centers, and other medical facilities  — operate like factories, shuffling patients in and out as quickly as possible. At the same time, healthcare workers see how our bosses try to minimize the number of staff whenever possible, stretching the labor of the current workforce to increase profits. It is clear that the U.S. healthcare system functions not with improving patient and community health as its primary goal, but rather to extract monetary value from the bodies of those damaged by capitalism.

As we stand up and fight back against capitalist healthcare, the bosses use manipulative techniques to divide, co-opt, and placate workers. Whether it is “appreciation bags” handed out to workers in hospital lobbies, donuts in break rooms, or pizza parties, healthcare administrators are always looking for ways to make healthcare workers forget about being exploited. By now, their insulting attempts have become a running joke among healthcare workers (take this meme, for example).

But it’s no joke when these pathetic efforts to keep healthcare workers from organizing fail, workers strike or authorize a strike and these bosses pull the trump card: they claim workers are “abandoning patients.” Their aim is not only to make healthcare workers feel guilty, but also to turn the general public, and even patients seeking care, against the “greedy” healthcare workers.

But let’s be clear: it is not only the bosses of this or that hospital or clinic propping up the factory dynamic of medicine. The medical-industrial complex is an extensive network of entities that all benefit from the current status quo in which health is always secondary. Democratic and Republican politicians alike have helped to uphold this dynamic. Former New York governor Andrew Cuomo, for example, was instrumental in shutting down several hospitals in the state, thus reducing the number of hospital beds. He even pushed a plan to cut Medicaid spending by some $400 million during the pandemic.

At the same time, union bureaucrats use all the language healthcare workers want to hear about improving poor staffing and focusing on patient health, but often end up betraying the very workers who believe the union leaderships have their best interests in mind during negotiations. For example, in March 2019, members of the New York State Nurses Association (NYSNA) at New York’s “big four” hospitals (Montefiore, Mount Sinai, New York Presbyterian-Columbia, and Mount Sinai West/St. Luke’s) voted by an overwhelming 97 percent to authorize a strike for safer staffing ratios. Ultimately, the nurses did not go on strike after the union bureaucracy waged an offensive campaign to convince them to accept a poor contract instead of fighting for more. Today, the nurses at these hospitals continue to struggle to provide care under poor working conditions with poor staffing ratios. The union bureaucracy continually demonstrates that it acts to curtail the revolutionary militancy of the workers.

This example shows how the union bureaucracy serves as part of what the great Italian revolutionary Marxist Antonio Gramsci called “the integral state.” This concept helps explain how the capitalist state apparatus extends its influence on civil society to maintain control. Union bureaucracies act as part of this integral state apparatus. Using the rhetoric of opposing the bosses,  under the guise of fighting with and and for workers, they function as the extended state in order to co-opt class struggle and decrease militancy — all in order to maintain capitalist structures.

Rejecting these attempts at co-optation, healthcare workers must continue to rise up and demand a healthcare system that actually considers improving patient and community health to be its central task. It should be up to the healthcare workers ourselves, and not the union bureaucracies who betray the workers time and time again, to decide how far to push our demands in each mobilization. Healthcare workers should work to combine our struggles with other workers who are demanding better working conditions. Labor struggle against capitalist exploitation is beneficial to the health of the fighting workers themselves and the general public. If striking Kellogg’s workers win their battle for better working conditions, it benefits not just them but also the entire working class.

Healthcare workers in particular, who have provided care throughout the pandemic, hold a strategic position in society. We can and should fight for more than just increases in pay or even improved staffing ratios. Yes, we should fight for those improvements, but healthcare workers should go further than our own economic demands to challenge the very nature of the capitalist healthcare system. By extending our focus to demands for free public healthcare and the fight against systemic racism and police brutality, healthcare workers can expand our fight toward challenging what capitalism depends on for its very existence. In doing so, we will be joining the fight against a system that is destroying us all.