Healthcare Workers: From “Heroes” to Targets of Police Repression

After months of being praised by NYC politicians as “heroes” in the “battle against Covid-19,” we as healthcare workers of NYC are now being attacked and arrested by the city for fighting against another deadly global pandemic: the police.

Take Back the Bronx and FTP4 Medics 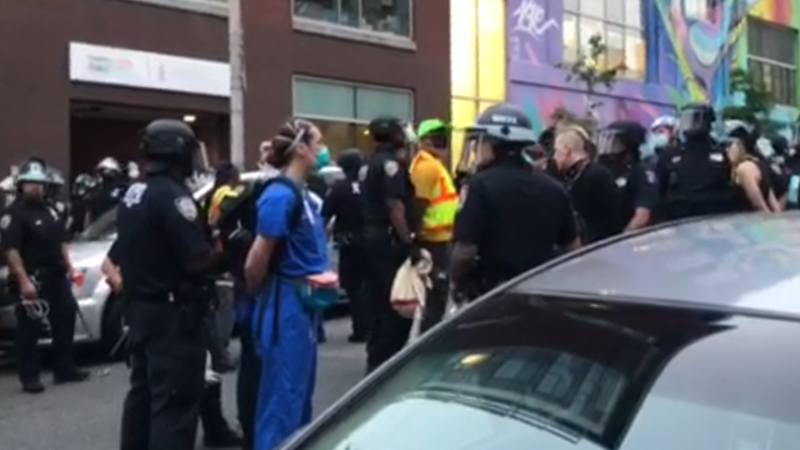 On June 4, the NYPD bum-rushed, kettled, and trapped hundreds of protesters in the Bronx at the FTP4 action organized and led by BIPOC Bronxites, in one of the most brutal acts of protest repression and crackdown yet this week in all of New York. Organizers were teaching Bronx history, raising chants and weaving through the streets and housing developments, as police presence tightened around the crowd. Before the 8PM curfew arrived, police had surrounded the group and begun beating, gassing and arresting protesters. Some who intended to leave before 8 o’clock were also arrested before the curfew and had their citation times altered by their arresting officers.

We healthcare workers were arrested and prevented from assessing many protesters with serious injuries who were cuffed on the ground crying for help, some visibly bleeding. Police informed us they had their own medics, but had only two FDNY EMTs to triage a crowd of more than a hundred people. Police also refused to allow us to help people whose hands were zip-tied and visibly purple, only loosening ties on one protester, borrowing our shears. After detainees – who were prevented from even shouting their names and identifying information to legal observers nearby – were packed into jail cells scattered across multiple boroughs, the NYPD then followed protesters offering jail support, again including medics and legal observers with correct documentation, to their vehicles where they again arrested essential workers for “curfew violation.”

Make no mistake: if it wasn’t clear before, it should be clear from this show of force that the police have declared war against the poor working class Black and brown communities of the Bronx.

By arresting and charging healthcare workers in the midst of the Covid-19 pandemic, the police have proven once again that their purpose is not “to protect and to serve” the people, but rather, to protect the ruling class and private property and uphold white supremacy by terrorizing Black and Brown communities. The NYPD is the most well-funded and organized gang in the city, protected by their “union,” the Fraternal Order of Police, which defends racist killer cops at every instance. The NYPD, under the leadership of Democratic Party politicians like DeBlasio and Cuomo, continues to crack down with impunity on those who stand up against them, refusing to wear masks, spitting on protestors, and mocking those who ask for this basic protection when packed into tight jail cells. The police are a pandemic, a deadly force that continues to maim and kill people – especially Indigenous, Black, brown, transgender, undocumented and poor people. When the Covid-19 pandemic claims more lives in the wake of uprisings across the nation, the blood of these murders will add to the already bloodsoaked hands of the police.

As the movement continues, we see various attempts at co-optation. Democratic politicians propose various reforms that the capitalist system can tolerate, but that ultimately will not lead to decreased deaths of Black and brown people at the hands of the police. The capitalist state continues to prove it is not a vehicle for actual progress around these issues. Instead, it is a vehicle for suppression and co-optation of movements demanding changes to murderous systems. Abolishing the NYPD is contingent on the eradication of these Democratic Party politicians and all other champions of the police, as well as the entire capitalist machinery of gentrification, worker exploitation, prisons, and for-profit healthcare in the city. In their place, we will build institutions of community control, where pandemics of racial capitalism no longer suffocate and power is in the hands of the people.

Take Back the Bronx