Healthcare Workers, Stand up: Silence is Not Health

Thousands of public sector workers across the country went on strike yesterday, with the largest concentrations in Buenos Aires Province. Among them were faculty and professors , judicial employees , and healthcare workers. In several cities, their voices could be heard as they marched through the rain, shouting, “Unity and struggle for victory!” 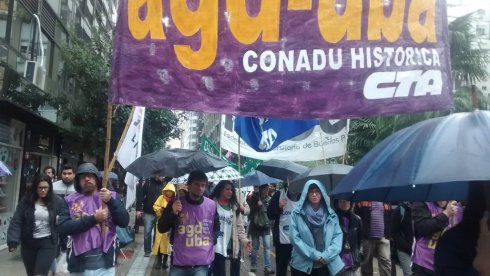 State employees have faced months of unabated, massive layoffs in numerous provinces (a “Resistance Map” depicting the layoffs and conflicts can be viewed here ). Across the board, provincial governors like María Vidal in Buenos Aires Province, Alicia Kirchner in Santa Cruz, and Rosana Bertone in Tierra del Fuego have shut down workers’ demands for wage increases that would loosen the chokehold of rocketing inflation and President Macri’s peso devaluation, and hikes in gas and electricity fees. Instead, the government has offered workers ludicrous poverty-level agreements (“paritarias”), sparking mass indignation.

After months of dragging their feet and failing to advance a plan of struggle against the ongoing austerity attacks, officials of the State Workers’ Association (ATE) were compelled to call for a national strike on April 19. Since