Heavy repression before the elections in Guerrero, there is currently a tense calm in the city

The police and military forces that entered Guerrero yesterday, continue their intimidatory actions, police check points, and the oversight of the voting polls in Chilpancingo and other main cities of the State. In Tixtla, around 300 protesters, among them the parents of the 43 students disappeared, continue the protests. 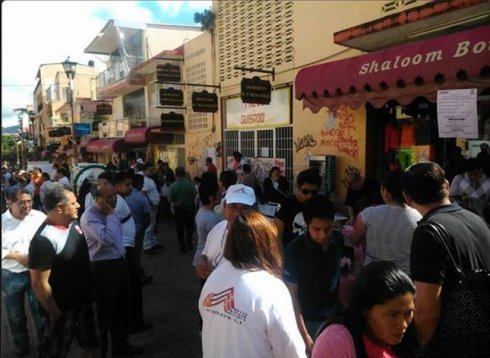 Yesterday, a day before the election, was an intense day in cities of Tixtla, Acapulco, and Chilpancigo. Very heavy confrontations were reported in protests that had the participation of teachers and the parents of the 43 students among different democratic sectors.

The roads of Chilpancingo were blocked by the teachers during several hours and there were mobilizations, burning of electoral ballots and paintings in the streets of Tixtla.

During the course of the day the government’s policy towards the protests became clear. Any protests against the elections had to be dissolved. Specially protests by the teachers organized in the Education Workers State Coordinator (CETEG)

As soon as the riot police came out of their trucks they began to deploy a massive operative that begun with tear gasses and moved in through the streets behind the protesters. The police went searching after the protesters house by house. The offensive was done despite kids and people standing by.

The main business of the city were closed, the media attempted to frighten the population. In response the CETEG teachers moved back into the Zocalo’s occupation they’ve had in Chilpancingo since the disappearance of the 43 students.
When the night fell in Tixtla municipality the blackouts begun, the tension was high in the the Ayotzinapa campus.

The confrontations resulted in the hospitalization of a leader of the Movimiento Popular of Guerrero, Juan Tenorio Villegas, and the professor Leoguin Sanches who had to be moved to the Puebla hospital due to his wounds.

The central Alameda was over watched by helicopters.
The city of Guerrero woke up today not sure of what the day would be like, while the mobilizations continued in Tixtla, where the National Electoral Institute (INE) suspended the elections.

The police moved in the Zocalo of Chilpancingo, to confront the teachers’ occupation, and momentarily, blocked the voting booths.

Currently there is a tense calm, the teachers have organized the occupation, the streets walls are painted with anti-election signs and the booths at the Alameda and the central market are being watched by police who check peoples bags ad they enter the city’s center.