But, having faced the might of the Hilton workers who last Monday marched into the hotel and demanded their rights, and after witnessing their growing strength within the hotel, the Hilton bosses realized they are going to need expensive help to defeat the workers.

And so General Manager Robert Langevin hired three separate union-busting firms to break the union. He hopes the anti-union lawyers will scare and confuse enough people to break the pro-union majority and defeat the union in the upcoming election on Dec. 4th.

At first, hotel management brought back a popular Human Resources manager, who had recently transferred to a hotel in North Carolina, to quell the revolt with promises of better pay and better treatment. The workers saw through this trick. That manager will stay in the hotel suite only as long as the election campaign. And after he checks out and collects his union-busting paycheck, he and all his promises will disappear.

A letter was also put out reminding the workers of what they can and cannot do in the campaign and subtly indicating that the union is some kind of foreign entity meant to get between the workers and their benevolent bosses. Again, the workers saw through this trick as they see the union as their own organization to be run democratically and through the membership. The workers also know the bosses break such rules with impunity. The letter states that they must punch out for their breaks to participate in the daily union actions, but this comes from a management that demands that workers work off-the-clock to finish rooms and routinely cuts into break time with the pressures of understaffing.

Then, the team of nearly a dozen union-busting lawyers from three firms who skulk the hotel, gathered small groups of workers together to explain the ‘pros and cons’ of the union. Though they made sure to single out the militants and detained them in a separate meeting room, still these mandatory meetings were shut down by militant workers. Healthy competition developed between which group of workers – either Haitian or Hispanic – can shut down the meetings more quickly. It got so that the firm brought in specifically for Haitians admitted that the workers were too strong and threw in the towel on small group meetings.

Now, the bosses have settled on a new strategy of carrot-and-stick. Individual workers, usually women, are cornered in rooms and in these closed door meetings are accosted by management and the anti-union lawyers. 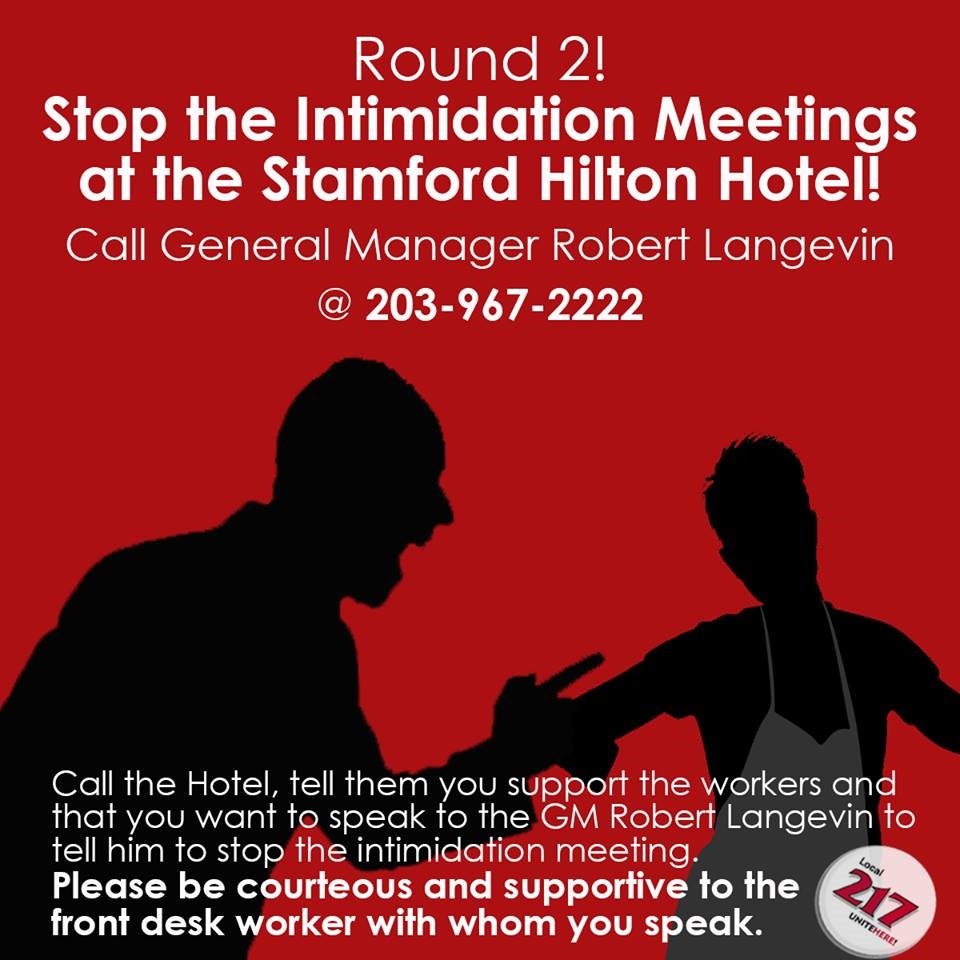 For the carrot, room quotas have been lowered and every worker has received a Thanksgiving turkey. The union’s first victories! But turkeys cannot make up for 34+ rooms a day at starvation wages or years of unaffordable healthcare. Thanksgiving from the disrespectful bosses is a hollow gift indeed. And these concessions won from the bosses will be taken away immediately if the union was to lose.

Just as the bosses have tagged in help, workers from other Atrium-owned hotels from across the country from Hawaii and Sacramento have also sent their support and solidarity thousands of miles eastward.

Closer to home, the workers of Hyatt in Greenwich and the Hilton Hartford have supported the work of growing the union by joining Hilton workers in their daily actions against management.

Against the bosses’ obvious, stale, and increasingly desperate strategy, these daily lunchtime actions have become the bread-and-butter of the workers’ strategy, and they are anything but stale. Every day the workers have a creative new tactic to keep management off-balance, from bringing in a turkey to GM Langevin for Thanksgiving – which lead to everyone receiving turkeys the next day – to a guessing game of how many hundreds of thousands the Hilton will spend on their anti-union campaign, to inviting local politicians and religious figures to speak directly to the bosses, the workers are confident in their victory.

However, there is still nearly two weeks left before the election, and the bosses will turn to more stick-than-carrot and the harder attacks will come. And let them!
Hilton workers are ready to fight.