The kidnapping of four indigenous community leaders and activists by police in Honduras has sparked nationwide protests demanding answers for their disappearance. The murder and abduction of indigenous land defenders in Honduras has increased dramatically in recent years, especially since the U.S.-backed coup of 2009. 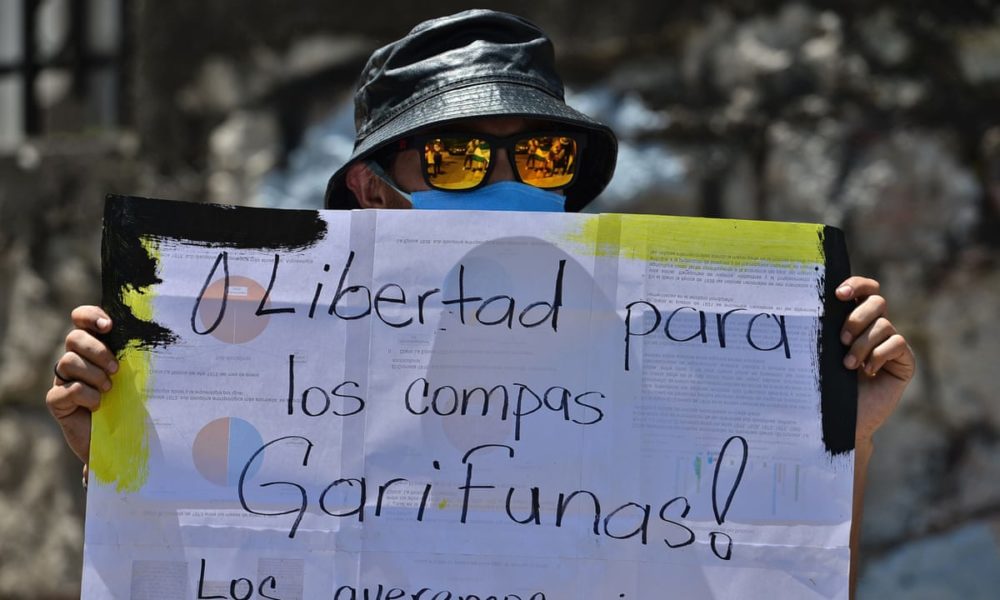 “Sneider’s just a kid,” says Miriam Miranda, a Garífuna community leader and coordinator of Ofraneh, the Black Fraternal Organization of Honduras. “I always remember that he said we have to empower our youth so they can make decisions in the community of Triunfo de la Cruz, so they can build their own future. […] How can they take that away from us? They can’t take that away from us! They mustn’t!”

Sneider Centeno is a prominent young leader of the Garífuna community of Triunfo de la Cruz, a Caribbean coastal town in Honduras, and an active member of the Ofraneh. On July 18, at about 5:20 a.m., he and three other community leaders, Milton Joel Martínez Álvarez, Suami Aparicio Mejía García, and Gerardo Mizael Róchez Cálix, were abducted from their homes by a group of men in police uniform, wearing bulletproof vests and armed with Mini Uzis and AR-15s. Members of the community who had been woken by the commotion attempted to build a barricade on the town’s only access road, but they were forced to move aside by the armed men, who sped away with the young leaders in three pickup trucks.

“We called the local police to report what was happening and to find out if they knew anything, because we know that searches are carried out, but they take place after 6:00 a.m. and this happened earlier,” said César Benedith, a leader of Ofraneh. “The answer was no. The neighboring Tela police said they knew nothing about the kidnapping, and even though they were informed while the events were taking place, they arrived at the community about 45 minutes to one hour after the kidnapping.”1

It has been two weeks since the events occurred, and the inhabitants of Triunfo de la Cruz are still demanding answers. Since the day of their abduction, road blocks have been organized by protesters from several towns demanding their release, as well as a national social media campaign launched to bring attention to the case.

Miriam Miranda, however, highlights the importance of considering the context in which the events occurred and warns against viewing this case as an isolated incident. “It’s not enough to say we want them back alive,” Miranda said. She continued,

It’s essential to understand that there is a constant violation of human rights there [Triunfo de la Cruz], and that the state has refused to resolve this long-standing conflict. There are economically powerful groups that have interests in the territories of the Garífuna people. They want to move our communities out, and, most of all, what we’ve been saying is that they want to make us disappear. It’s not only that they’ve kidnapped young members of our community in Triunfo de la Cruz. We are dealing with a murderous political class. […] How could it have happened? On Saturdays and Sundays there is no traffic. We’re in the middle of a pandemic! How could so many vehicles have entered the town with men armed with high-caliber weapons? Who’s in charge of controlling that? It’s not only the fact that they kidnapped these young men. It’s the fact that there were conditions for that to happen. And those are the conditions we have to question. We have institutions that have practically been taken over by organized crime. And the victims are the communities and leaders.2

Triunfo de la Cruz is located 220 kilometers to the north of the capital, Tegucigalpa, and is one of the five towns on the Atlantic coast of Honduras that belongs to the Garífuna community, a people of African and indigenous descent. Since the 1990s, several corporations have targeted the area for the development of tourist resorts and the exploitation of natural resources.

From the 1940s to 2000s, the Honduran state recognized the community’s ownership of various parcels of its ancestral lands. It has, however, since refused to enforce the decisions, instead expanding urban developments in the area and selling or transferring community land for industrial and tourism purposes to companies like Indura Beach & Golf Resort or Playa Escondida Beach Club. Some of the land they have seized has been illegally occupied, but much of it remains unused.

In June, in the context of the Covid-19 pandemic, the people of Triunfo de la Cruz held a General Assembly to discuss the measures to take with respect to the young people who had returned from the cities to the community as a result of the health crisis. They decided that the community, under the leadership of Sneider Centeno, would make use of the lands to produce crops and feed their families.

Since 2015, the community has been demanding that the government abide by a ruling of the Inter-American Commission on Human Rights, which found that the state had violated the Garífuna people’s property rights. In the ruling, it ordered the state to grant the people of Triunfo de la Cruz a community title to their land, return the land it had seized illegally from them and provide reparations. But the authorities have failed to take any steps to comply with the decision.

“We have denounced the state’s refusal to comply with the ruling [of the IACHR],” says Benedith. “This is a failed state that is not even capable of providing safety to our community, which has obtained rulings in its favor. Many of our leaders have been killed and not even one of the cases has been resolved.”

The murder and kidnapping of land defenders in Honduras has increased dramatically in recent years, especially since the U.S.-backed coup of 2009. According to a recent report by Global Witness, 14 environmental activists were murdered in 2019 alone, making Honduras the most dangerous country that year.3

“In the past 20 years,” says Pedro Landa, an activist with the Reflection, Research and Communication Team (ERIC), a human rights group in Honduras, “Honduras has been considered one of the most corrupt countries, servile to transnational capital. The situation became worse after the coup, because of the government’s links to organized crime and the increase in corruption.” The activist denounces the current government of Juan Orlando Hernández, which has created special battalions formed by the army and police forces. “They call them ‘Special Groups for the Resolution of Environmental Conflicts,’” he says. “We know that the police and the Army are the only way they have to resolve this type of conflict.”4

“They have launched a campaign to make us afraid of each other,” concluded Miranda. “They have sown terror among the people, so that we will regard ourselves as enemies. […] We need to generate a sense of community, mutual love, trust, and life. Because we live in a country where we’re sold a culture of death every minute and every second of the day. And we have to fight against that.”

Melisa Henríquez, a young activist of the ERIC, adds, “I think all of these injustices that are occurring right now should be what sparks a reaction. The people need to take action to rescue our country and the youth should play a leading role in that struggle.”5