While Mainland China celebrated “Single’s Day,” which is the country’s equivalent of “Black Friday” and the largest online shopping event in China, Hong Kongers were in the streets fighting for basic democratic rights. 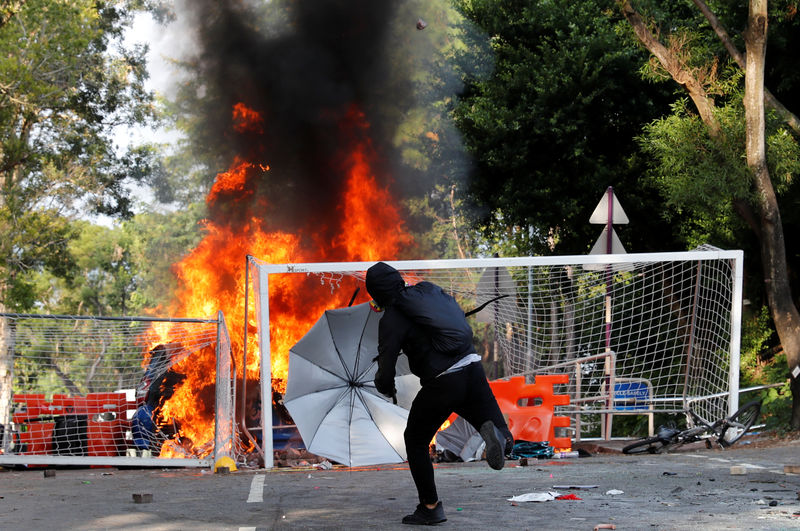 A university students throws an object at riot police as they standoff during a protest at the Chinese University of Hong Kong, Hong Kong, China November 12, 2019. REUTERS/Tyrone Siu

After months of mobilizations and despite the violent repression by the police, the anti-government protesters are not backing down.

On Monday morning in the eastern Hong Kong district of Sai Wan Ho, during a planned general strike, a police officer shot live ammunition at two protesters, one of whom is 21 years old. A video of the incident was live streamed on Facebook and clearly shows the man getting shot in the torso. Police issued a statement, claiming that any accusations of reckless use of firearms are “totally false and malicious.”

Also on Monday, about 12 miles away from the shooting, a police officer drove his motorcycle into a group of protesters, apparently trying to run them over. A video shows him charging into the crowd, zigzagging across the street, and nearly slamming into someone. Initially, police said that the officer was defending himself and a colleague against attacks from protesters, but after the video was shared widely on social media, the officer was suspended.

A day before, on Sunday, a 16-year-old girl had an abortion after filing a report claiming that she was gang-raped by four men inside a police station on September 27. Although it has yet to be verified, the story sparked outrage among Hongkongers. The official response so far is that the investigations do not match the allegations.

On Friday, November 8, a university student named Chow Tsz-lok died in the hospital after falling in a parking garage during clashes between police and protesters. While the protesters say that police acted in ways that effectively prevented paramedics from reaching the young man, a statement by the police calls these allegations “certainly false.”

The escalating confrontations have also lead to one pro-Beijing man being set on fire. A disturbing video shows the man arguing with a group of protesters and shouting “You’re all not Chinese” before one of the group pours a flammable liquid on him and lights it.

The anti-government protests in Hong Kong are now in their 24th week. Initially sparked by the Extradition Bill, the movement quickly put forth a set of democratic demands, one of which was a call for an independent inquiry into police brutality. However, the repression continues as police use batons, teargas, pepper spray, and bullets to squash the protests.

A panel of experts appointed by the government issued a report on Friday saying that they were not able to independently investigate police misconduct. One of the panel members posted on Twitter that they did not have the “powers, capacity, and independent investigative capability necessary to match the scale of events and the standards required of an international police watchdog operating in a society that values freedoms and rights.”

More than 4,000 have been arrested since June, and, according to unofficial estimates, more than 3,000 people have sustained protest-related injuries. Meanwhile, Carrie Lam, Hong Kong’s Chief Executive, shows no signs of wanting to make concessions. While the extradition bill was withdrawn on October 23, the other demands, including free elections, continue to be ignored. Referred to as “rioters” and “enemies of the people” by Lam, the protesters seem not only undeterred but increasingly enraged at the government’s refusal to listen. In this atmosphere, the slogan of the protests has transformed from “Hongkongers, resist!” to “Hongkongers, avenge!”

The death of Chow Tsz-lok and the shooting of the young protester on Monday immediately prompted violent clashes with police. All over Hong Kong, people took to the streets, blocking major roads and public transportation. On Tuesday, students at Chinese University of Hong Kong set up barricades to prevent police from entering. Refusing to disperse, they answered the tear gas and rubber bullets directed at them by police with homemade gasoline bombs. At other universities and in the Central Business District, there were more disruptions, and the repression was met with resistance.

The government of Hong Kong is warning that the city is “on the brink of total breakdown” and issuing vague threats that it will “spare no effort in finding ways and means that could end the violence in Hong Kong as soon as possible.” Unless there is an effort, however, to take the demands of the protesters, the struggle is very likely to continue. The left in the United States and elsewhere must show their solidarity with the people of Hong Kong who are fighting so courageously against state repression and police violence.