Hospitals Are Reaching Their Limits and Neither Party Has a Solution

Nine months into the pandemic, the working class is suffering more than ever, and it’s only going to get worse between now and mid-January. 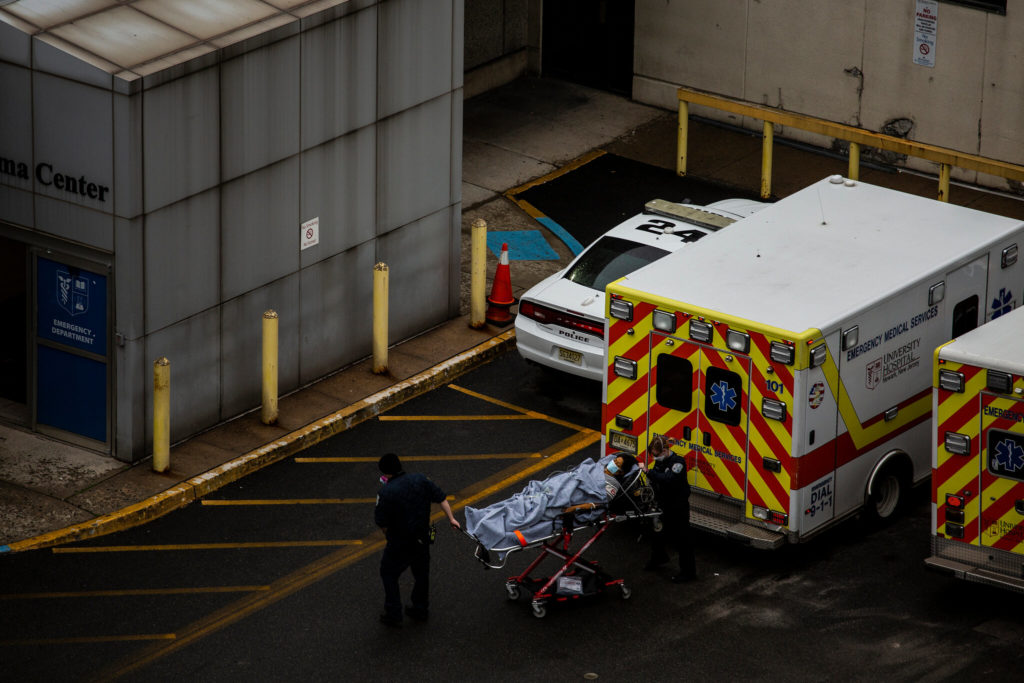 Yesterday, the New York Times released a new report on the rapidly dwindling ICU capacity across the U.S. as a result of the surge of Covid-19. The report is based on new data released by the federal government on Monday. The article states that “more than a third of Americans live in areas where hospitals are running critically short of intensive care beds,” and “one in 10 Americans  — across a large swath of the Midwest, South and Southwest — lives in an area where intensive care beds are either completely full, or fewer than 5 percent of beds are available.” Many of these areas are rural communities, where hospitals are small and have even fewer resources than larger hospitals — which are also already struggling.

The average number of new confirmed cases per day reached 100,000 in early November, and 200,000 per day in early December. Of the 56 U.S. states and territories, 48 have “unchecked community spread.” While New York City is reporting numbers of new cases similar to late March, the state as a whole has recently exceeded the peak of the first wave in April, although hospitalizations and deaths are still much lower than the spring. Experts suggest that we are only beginning to see the effects of Thanksgiving travel and gatherings, since today marks two weeks since the holiday.

Comparing data on reported cases and Covid-19-related hospitalizations in the U.S. shows that patterns observed in the rates of new cases are reflected in the hospitalization rate around one to three weeks later, when some of those who tested positive become more sick. This means that with the number of new cases still rising at an alarming rate, hospitals are going to become even more overwhelmed in the coming days and weeks. The number of people hospitalized with Covid-19 has already doubled since only the beginning of November, and according to the New York Times, the Governor of New Mexico “is expected to soon announce that hospitals can ration care based on who is most likely to survive.”

More and more people are recovering from Covid-19 now compared to the beginning of the pandemic, since medical research has helped doctors improve treatments. However, having effective treatments doesn’t matter much if hospitals are so overwhelmed that people can’t receive the care that they need. And even those who are able to receive treatment may still suffer from serious long-term complications.

Certain states and municipalities are beginning to implement stricter safety measures. Most of California is under a stay-at-home order, and Governor Andrew Cuomo has announced new, stricter criteria for triggering either additional restrictions on indoor dining or a full shutdown of all non-essential businesses. Dr. Anthony Fauci, the director of the National Institute of Allergy and Infectious Diseases, has said that the holiday season’s full impact on the pandemic likely won’t be known until mid-January, and one worst-case scenario model (i.e., if states do not re-impose restrictions) predicts that cases will peak around January 20 at more than 1 million new cases per day, even when accounting for the anticipated vaccine rollout. Projections that include new restrictions or more rapid vaccine distribution predict a peak at about half that number sometime between Christmas and Joe Biden’s inauguration.

There are still many unknowns regarding the vaccines by Pfizer and other companies. According to Vox, the Pfizer vaccine’s “90 percent efficacy” refers only to how effective the vaccine is at preventing serious illness. In other words, vaccinated people who contract the virus may still be contagious to those around them, even if they don’t experience symptoms. We also don’t know how long the protection lasts — people may need to get re-vaccinated every year, like a flu shot. There could also be difficulties with vaccine distribution, including people getting the first dose of the vaccine but not the second. Furthermore, Gregory Poland of the Mayo Clinic says that “The efficacy measures we have [for the vaccines] were at times of relatively low transmission of disease compared to now…It was with masks on with people distanced, none of which will be true in time.”

Additionally, many people are distrustful of the coronavirus vaccine — and not just anti-vaxxers. In a survey of healthcare workers conducted by the CDC, less than two-thirds of healthcare workers said they would get the vaccine. Distrust among Black and Latinx communities is also high compared to white adults. This distrust is not due to poor education or irrationality, but due to a long history of abuse and mistreatment of racial minorities at the hands of the medical establishment in the United States. Even if widespread vaccination is logistically possible by the end of the spring, many people will likely wait for more data before they decide to get vaccinated themselves. Nor will vaccine access be equitably distributed; according to The Guardian, rich countries representing 14 percent of the world’s population have already bought up more than half of the vaccines, and 96 percent of the Pfizer vaccine and 100 percent of the Moderna vaccine have already been purchased by wealthy nations. It’s estimated that 9 out of 10 people in less-wealthy countries will not be able to access a vaccine in the next year.

Meanwhile, there are only nine days left for Congress to pass a new stimulus bill before the end of the year, and the bipartisan bill that seems to have the best chance of passing is even more inadequate than the CARES Act passed in March. The new bill includes no direct payments to workers, a 50 percent cut to the unemployment pay allocated by the CARES Act ($300 per week instead of $600), and an extension of key relief programs for only one to three additional months, depending on the program.

Congress is trying to provide as little aid as possible to string people along until they can declare the pandemic “over,” even though experts say that widespread distribution of the vaccine won’t end the pandemic once and for all. This bill is not nearly enough. Even the White House coronavirus task force says that “The current vaccine implementation will not substantially reduce viral spread, hospitalizations, or fatalities until the 100 million Americans with comorbidities can be fully immunized, which will take until the late spring,” and that “large-scale benefits of lower deaths and hospitalizations will only come after months of immunization.” Furthermore, the director of the Maine CDC says that based on recent research, “any Covid-19 vaccine will be much less effective at preventing death or illness if the vaccine is introduced into a population where the virus is already raging” (paraphrase by News Center Maine).

The virus is raging through most of the U.S. population, and even though the stock market continues to soar, the economic situation is getting worse, not better, for the majority of the U.S. population. Millions of people are still out of work, with more new jobless claims filed every day, and sectors like tourism and the performing arts aren’t likely to recover for years. We need much more than the 30- to 90-day pittances being discussed in Congress. And things aren’t likely to get much better under Joe Biden.

Biden’s stated Covid-19 priorities for his first 100 days in office include “everyone wearing masks” (but still being forced to go to work), 100 million vaccinations, and reopening schools. Nowhere in these priorities does he plan on taking responsibility at the federal level for keeping people safe. In fact, reopening schools is likely to be actively harmful, given recent data from the largest Covid-19 contact tracing study to date that suggests children and young adults play a much bigger role in transmitting the virus than previously thought. Reopening schools is a key provision for keeping the economy running and generating profits, not for keeping people safe.

For Biden to make reopening schools a priority flies directly in the face of public health advice: to avoid the worst case scenario, the U.S. needs to impose more safety restrictions, not fewer. While Biden at least consistently acknowledges the existence of the pandemic, this means very little if he continues to put profits above people, and without mass pressure from the working class, that’s exactly what he will do.

Nine months into the pandemic, the working class is suffering more than ever, and it’s only going to get worse between now and mid-January. As just two examples, North Carolina is expected to reach full hospital capacity within six weeks, and some hospitals across New York could reach 90 percent capacity, triggering a new shutdown, as early as the end of next week.

Congress and state and local governments need to significantly increase the aid and protections offered to working people, and healthcare workers need as much support as possible in the form of money and other resources as they face workload increases alongside incredible stress and burnout. The data clearly shows that the United States’ approach to the pandemic is failing. Only a significant change in policy can shift the tide anytime soon, and the bourgeois government won’t do it unless we make them.