How Do You Like These Apples? 1,400 Hunts Point Workers Are On Strike

Some 1,400 workers at Hunts Point Terminal Market in the Bronx — the largest wholesale produce market in the world — are on strike, demanding wage increases and better health benefits. Refusing to back down even in the face of police repression and threats from management, the Hunts Point strike serves as an example to the entire labor movement of how to fight the attacks of the bosses and the government officials who protect their interests. 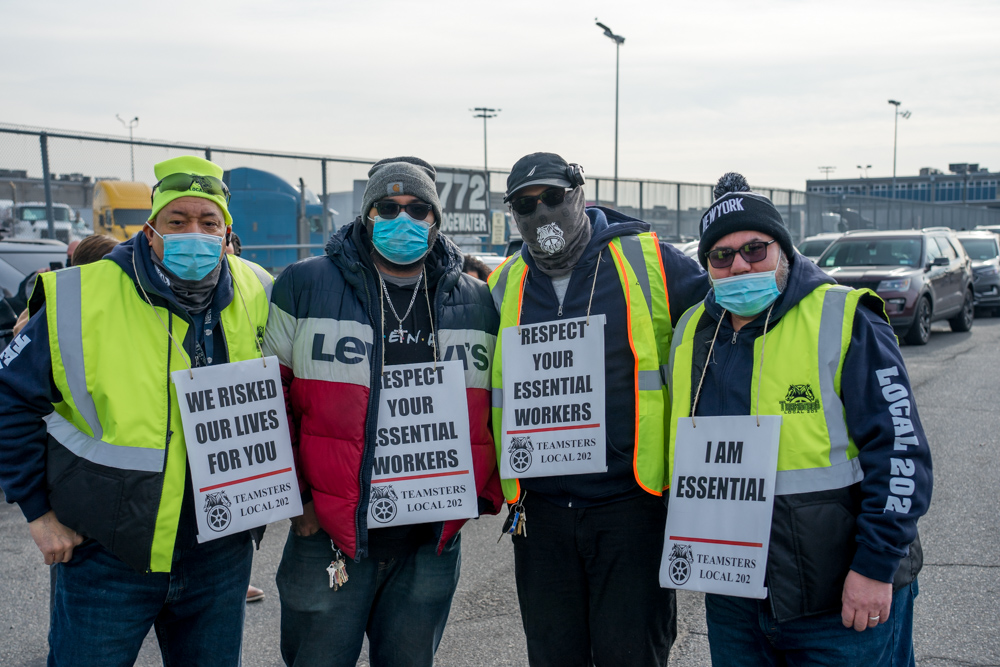 On the second night of a strike of more than 1,400 workers at Hunts Point Terminal Market in the Bronx, New York City Mayor Bill de Blasio sent two dozen riot cops to break up a small picket line. At least five people were arrested. Outnumbering workers at least two to one, the cops advanced on picketers blocking a supply truck from entering the market complex. In videos of the repression, workers can be heard shouting, “Hands Up, Don’t Shoot” — echoing the chants of millions of Black Lives Matter protesters in 2020.

When workers put their lives on the line every day to keep production and distribution running smoothly as Covid-19 cases rage across the city, protecting profits for the bosses and the City, they are called “essential” and “heroes.” As soon as workers stand up for their rights and demand protections and a living wage to survive the pandemic, they are labeled “criminals” and threatened with nightsticks and pepper spray. Pontificating about pride and support for New York City’s frontline workers out of one side of their mouths while sending the cops to beat workers with the other, it’s clear which side Democrats Bill de Blasio and Governor Andrew Cuomo are on.

Despite this repression, the workers of Hunts Point are not backing down. They say they will extend their strike until their demands are met. Dock workers, warehouse workers, truck drivers, and others organized in Teamsters Local 202 are demanding a $1 wage increase and better health benefits.

In contract negotiations over the weekend, management countered the union’s demands with a pitiful $0.32/hour wage increase, saying the company was stretched too thin because of the pandemic to offer more. But the workers see this for the lie it is. Hunts Point Terminal Market has received as much as $15 million in Paycheck Protection Program loans from the federal government to keep its operations running and keep paying the bloated salaries of its bosses during the pandemic. Meanwhile, most workers at Hunts Point are paid just $40,000 a year to live in New York City, one of the most expensive cities in the world. These workers are critical to feeding much of the tri-state area of New York, New Jersey, and Connecticut and even beyond, but cannot afford to feed their own families. A long overdue $1/hour wage increase is well within the company’s capacities.

“We have been out here breaking our backs every night, no matter rain or snow, sick or healthy, to support our family. We were here during Sandy and COVID. That’s why we are fighting for a dollar,” says Gerson Castillo, a worker at the market. Indeed, Hunts Point workers have been showing up every day for more than 10 months to continue to supply fresh produce to millions of people across the country during the pandemic. More than 300 workers have been infected with Covid-19 while on the job, and at least six have died from the virus since the pandemic began last year. Meanwhile, the bosses tell workers they should just be happy they have a job.

As warehouse forklift operator Richard Soto told Left Voice on the picket line, “They’re treating us like we’re garbage, like we’re nobody, when we’re making them rich and putting our lives in danger.”

With all of the unionized Hunts Point workers out on strike, the company has brought in scabs and private security to keep the doors open — just as the bosses and government officials scramble to end the strike. Hunts Point Terminal Market is the largest wholesale produce market in the world, servicing tens of millions of people through retailers across 49 states. It supplies 60 percent of the produce in New York City. A strike of this magnitude will put a huge dent in profits all the way down the distribution line, affecting suppliers and buyers alike.

Beyond that, the symbolic strength of this strike cannot be underestimated. It is the first strike the union has waged since 1986. The pandemic has pushed workers to realize that while they are essential, the bosses and their profits are not. Workers are rising up to demand more, and as the strike continues, their collective action is a threat to the capitalists. These workers have the potential to inspire workers across the country who have been sent to die during the pandemic without protections, hazard pay, paid time off, or even a living wage. And as the cops, on the orders of Democrat officials, beat and arrest workers, they provide just one more example of how the state represses anyone who challenges the ability of the bosses to make a profit, whether they are “essential” workers or protesters demanding an end to police brutality.

The Hunts Point workers are poised to win their demands and so much more. Even as management and the City try to break up the strike, the workers have the power to shut down operations completely and hit the bosses where it hurts the most. The success of the strike depends on Hunts Point workers staying on the picket line, defying the threats of the bosses and any capitulation by union leaders. The rank-and-file workers must fight — with the full support of the anti-racist movement and all of us who must stand up to the capitalists who aim to have us pay for their crisis — to extend the strike, draw other workers not striking into the action, and pressure their leaderships until every one of their demands is met.