How I broke with the Democrats

As a hotel worker in Stamford, CT, I oppose Bernie Sanders and his party. I take this position because I watched the Democrats betray hotel workers in Providence. 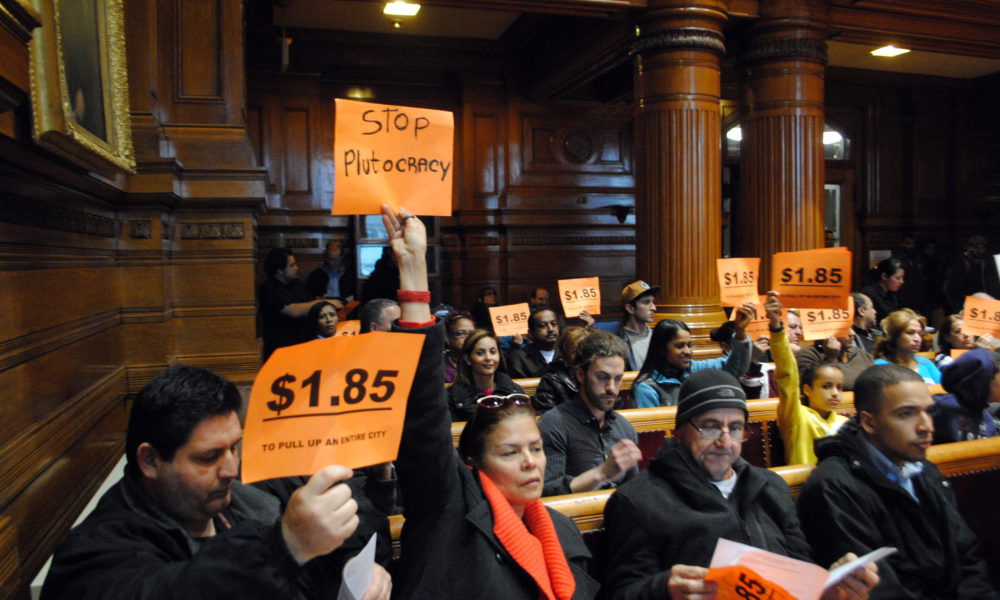 As a hotel worker in Stamford, CT, I oppose Bernie Sanders and his party. I take this position because I watched the Democrats betray hotel workers in Providence and because I know that Sanders’ role is to usher would-be socialists back into the Democratic Party.

Left Voice is full of more in-depth arguments outlining the history of the Democratic Party and the part it plays in American capitalism, but given the difficulty of would-be communists to break with the party, I outline here just the start of my turn toward class independence.

A few years ago, there was a union fight to raise the minimum wage for hotel workers to $15. Day in, day out, hotel workers do backbreaking work—cleaning over two dozen rooms a day for poverty wages in unsafe, often unsanitary conditions. For example, many workers at the Hilton complained about the unidentified green sludge dripping down the staff elevator. It was a small thing but a constant offense to the predominantly immigrant women workers; it was further evidence that the company would not fix even minor things, even though they were repeatedly asked.

That Hilton racked up $25,000 in fines for labor violations, while the nearby Renaissance hotel was inadequately penalized $8,000 by OSHA for causing chemical burns on the hands and arms of housekeepers because of poor equipment and volatile chemicals. The Renaissance also disgracefully fired a pregnant woman who continued to clean the same number of rooms until her water broke in a guest room.

At the same time, one particular hotel-owning family, but other owners too, were making huge profits. The Procaccianti Group, a real estate investment and management company that owns some of the biggest hotels in the city, received tax breaks for the privilege of exploiting more and more of the Rhode Island working class.

Under these circumstances, workers walked up and down Providence every day with a petition to put a $15 minimum wage referendum on the ballot for the upcoming elections. They would work shifts and then go out canvassing, or they would work their two or more jobs during the week and canvass into the night on their one day off. They knew what they were fighting for.

Of course, the bosses did too, and so they went to the Democratic Party to ask for help. The Democrats passed a law in their General Assembly to forbid municipalities like Providence from changing their wage rates. This was only a few hours before City Council passed a resolution in support of putting the vote on the ballot. It’s true that City Council was made up of Democrats who voted for the resolution, but at that point the law had already been passed, so what did it matter if individual politicians voted for or against higher wages? They used this opportunity to look good while still acting in the interests of capitalists, as the Democratic Party has done time and again.

In response, several housekeepers went on hunger strike to demand that the Democratic governor veto the Democratic Party’s law and let Providencers vote for a higher wage. Each day it was a Democrat who walked by the hunger strikers, and each day it was a Democrat who refused their modest demand to let Providence vote. The governor signed the law, and the workers were denied the most modest wage increase. The current Rhode Island minimum wage is $10.50. Democrats are now proposing to raise it to $15 an hour, but only by 2023.

In the grand scheme of things, this is only a small betrayal by the Democrats, who have historically done so much worse, but it was enough for me. I wouldn’t forgive them then, and will not now.

Communists have an analysis of how the world works and how it could be changed, and as a result they have only two tasks: to find angry workers and to tell the truth, even if it is unpopular. The number of strikes last year—the highest in 30 years—is proof enough that capitalism produces plenty of angry workers.

As for the second part of this project, now is not the time to be the opportunist who refuses to explain the lessons of the past. That most important of lessons is that the liberation of the working class is the task of the working class alone. We will get what we deserve only if workers come together as an independent political power, trained through shop-floor militancy and organized democratically.

And we deserve the Earth.