After the shocking tape discussing sexual assault, how can women fight against Trump’s misogyny? Hillary is no alternative, with her imperialist policies abroad and a history of hurting working women in the US. Last week’s examples from Argentina and Poland show women a way forward in the fight against misogyny and for our rights. 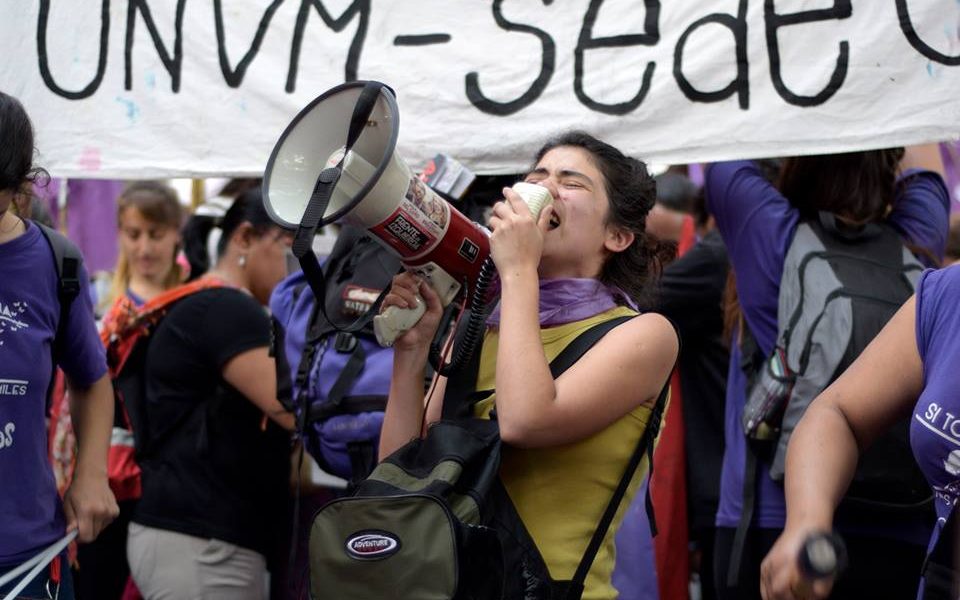 After the shocking tape discussing sexual assault, how can women fight against Trump’s misogyny? Hillary is no alternative, with her imperialist policies abroad and a history of hurting working women in the US. Last week’s examples from Argentina and Poland show women a way forward in the fight against misogyny and for our rights.

Another week, another “scandal” in the US Presidential elections. This scandal, which seems to be the nail in the coffin for the Trump campaign, came in the form of a 2005 tape of Donald Trump bragging about harassing and assaulting women. As opposed to what much of the media initially said, the problem is not that the conversation was “lewd”, but rather, that Trump talks about sexually assaulting women—he talks about kissing women without asking or waiting for their consent. He talks about “grabbing them by the pussy” because as he said, “when you’re a star, they let you do it.”

It is impossible not to feel sick to your stomach hearing his comments, as well as those of the “Today” show’s Billy Bush. However, this tape is no surprise to most. It is no surprise that someone who calls women dogs and makes misogynist comments about many women, from Rosie O’Donnell to Fox News’ Megyn Kelly, would make the comments in the 2005 video. The list of sexist comments goes on and on. He has said things like, “If Hillary Clinton can’t satisfy her husband, what makes her think she can satisfy America?”. He views women as sexual objects to be used by men. Thus, it’s no surprise that someone who tweets “…26,000 unreported sexual assaults in the military-only 238 convictions. What did these geniuses expect when they put men & women together?” would also say the vile things we heard on the tape. The Republican Party can feign surprise to distance themselves from Trump’s sinking ship, the rest of us are appalled but not surprised.

For the record, Trump’s comments should not be abhorrent to men only when they position themselves as women’s husbands or fathers. The following tweet by Mitt Romney is much like what other Republicans have said: “Hitting on married women? Condoning assault? Such vile degradations demean our wives and daughters and corrupt America’s face to the world.” Trump’s sexual violence should be abhorrent because women are people who deserve respect and shouldn’t be touched without their consent. Women as people, not just wives, not just their father’s daughters. Women as women, independent of their relation to a man, deserve to be respected. This is basic yet still needs to be repeated.

As is to be expected, Trump took absolutely no responsibility for his sexual violence in his supposed apology or in the debate. His argument was that sexual violence is no big deal and that it shouldn’t overshadow the “real issues” like job loss and ISIS. Too often, sexual violence is viewed as a minor issue, but it isn’t. One in six women suffer from rape or attempted rape, and every 2 minutes, an American is sexually assaulted.

In addition to his sexist rhetoric, Trump’s words match his anti-woman policies, exemplified by his call to punish women for seeking an abortion. For several months, he had no plans about paid family leave, child care, or equal pay on his website, demonstrating that he certainly would not provide any advances for women. Now those plans exist, but favor wealthy families via tax deductions. Working class families who live paycheck to paycheck need child care, not a write off several months down the line. Trump leaves low income families and especially women to fend for themselves.

So how can we fight against vile and misogynistic Trump? To many, this is yet another reason to vote for Hillary. After all, she certainly does not say these misogynistic things about women. Her policies appear more pro-woman in that she supports the right to choose, pay parity, and paid family leave. She certainly has never explicitly endorsed sexual violence or perpetrated it, as Trump has. There is the allegation that Clinton covered for her husband’s sexual violence, as the Trump campaign has made sure to expose. Hillary Clinton should not be held responsible if her husband sexually assaulted women; she should be held responsible if she did in fact, try to cover up evidence.

Yet, this problem is bigger than Trump explicitly condoning sexual violence or the claim that Clinton is covering it up. This is a fight against sexual violence, against rape culture, for women’s rights to their bodies, and for women’s well being. It is the right to an abortion, the right to be able to live fully and without fear as women. From this perspective, it is clear that Clinton’s policies are anti-women, from her domestic policies to her foreign policies.

Clinton was on the board of Walmart, the poster-child of sweatshop labor. Certainly, Clinton did not fight for the rights of the women working in sweatshops around the world to make Walmart products. She did nothing to help those who work for minimum wage at Walmart stores either. She didn’t step up to help the women kicked off of welfare because of Bill Clinton’s welfare reform. On the contrary, she supported welfare reform, increasing the financial struggles facing women all across the US. She did not support women when she backed Bill Clinton’s Crime Bill, which incarcerated black and brown people en masse—increasing the number of women in prison and leaving even more women without their brothers, sons, husbands and friends.

There is incredible hypocrisy at work when a candidate claims to support women at home while bombing Black and Brown men, women and children abroad. Certainly Clinton’s foreign policy of supporting the Iraq war or of supporting the rise of a right wing dictatorship in Honduras led to the death of thousands of civilians and demonstrated a lack of concern for the lives of women in those countries. According to biographer Gail Sheehy, Clinton stated, “I urged Bill Clinton] to bomb [Serbia].” In the bombing of Serbia in “Operation Allied Force” launched by Bill Clinton, more than [2,000 civilians were killed, including 88 children. The imperialist policies of the Clintons go on and on.

Some Democrats come back to the issue of abortion—arguing that at least Clinton will help keep abortion legal. However we must question the reality behind this. During the Obama administration, there has been significant erosion of abortion rights in this country. A 2013 report argued that the pro-life camp made the biggest inroads in the history of Roe v. Wade in the few years before 2013. This trend continues to this day. From 2011-2015, 288 new laws that restrict abortion were passed.

While this has happened, there hasn’t been massive nation-wide mobilization to defend a woman’s right to an abortion. Certainly, Hillary has not called on women to take to the streets to defend their right to choose. She has not put forth a tiny portion of the effort she is exerting to get elected towards barring this anti-abortion legislation. Imagine if all of the volunteers who are knocking on doors and making phone calls for Hillary were put to work to mobilize people to protect a woman’s right to choose.Imagine Hillary’s thousands of volunteers taking the streets to disbar racist and sexist judges like Aaron Persky, who sentenced Stanford student Brock Turner to a mere 6 months in jail for raping an unconscious woman on his college campus.

To some, intentional collective action seems impossible. Yet, just last week there were two examples of massive women’s mobilizations that prove that it is possible to organize for the rights and dignity women deserve. Last weekend, the 31st National Women’s Conference took place in Argentina. An estimated 60,000 women attended, demanding an end to femicide under the banner #NiUnaMenos (not one less) and the right to an abortion. It is this kind of conference and these kinds of mobilizations that can stem the tide of growing anti-abortion legislation.

The events in Poland are a perfect example of the potential of women organizing, particularly of women workers organizing. The government was on the verge of passing a total ban on abortions in Poland, but then women staged mass protests in 60 cities across the country. On “Black Monday” women dressed in black and many refused to go to work. Instead, they took to the streets to protest the bill. Not only did Polish Minister Jaroslaw Gowin say that the mobilizations “caused us to think and taught us humility”, but the Polish parliament voted 352-58 with 18 abstentions against the abortion ban. Two weeks ago it looked as if the anti-abortion bill would pass. Last week, it was defeated by a huge margin. The defeat of the abortion ban in Poland shows us the power of women united, as well as the power of a strike. It is these kinds of mobilizations that can stop the conservative right from stripping rights away from half the population.

To be clear: Trump is vile. We must fight against him with everything we have. Just this week in Poland and Argentina, we have seen two powerful examples of ways to fight. Voting for Hillary won’t guarantee our right to an abortion—we have seen how these rights are withering away before our very eyes under a Democratic presidency. A vote for Hillary is not a vote for a pro-woman agenda. Rather, a vote for Hillary is a vote for policies that hurt women in the US and abroad. Instead of voting for Hillary, people must consciously fight for the rights of all women. What guarantees women’s rights is not having a woman in power; it is visible and meaningful organization and mobilization in the streets and in the workplace.