How to Win Medicare for All? Call for a Nationwide Mobilization Now

A main talking point among moderate pundits is that Medicare for All is not politically feasible. A mass nationwide mobilization will show that a vast majority of people support it, and that the social force to win it is there. 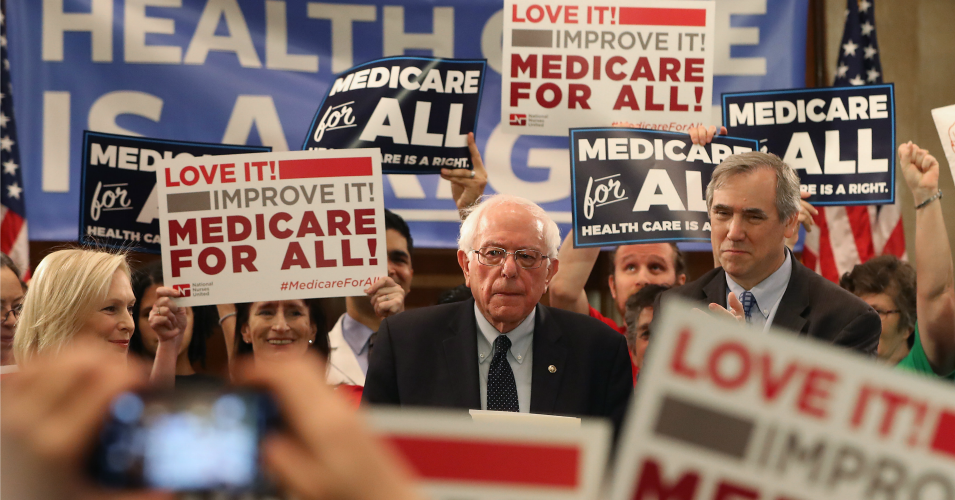 The reform of the U.S. healthcare system has been at the center of the debates in the Democratic primaries, and Bernie Sanders’s Medicare for All proposal has created a major divide in the field. His plan offers a transition to a single payer system, where private insurance companies are eliminated and a government-run program provides coverage to all U.S. citizens. Despite all the “red scare” about this plan, it is not even as progressive as the British National Health Service (NHS). In fact, there will still be a lot of profit to be made in health care, for private hospitals, drug companies, medical device manufacturers, and diagnostic equipment tech companies. Yet, as we explained before, winning access to health care for everyone regardless of their employment situation would be a huge victory for working-class people in the US.

Such a reform would transform the landscape of class struggle in the U.S., if only by the simple fact that workers would no longer risk their (and their families’) access to health care every time they engaged in collective action or workplace organizing.

Centrist pundits like New York Times columnist Paul Krugman argue that Medicare for All is Bernie Sanders’s biggest liability. They are dead wrong. Medicare for All is Bernie’s biggest strength. It is the main reason why his campaign has been able to attract so many volunteers, and it is the driving force behind the victories in Iowa and New Hampshire, and the landslide in Nevada. It is not only that healthcare is the number one concern for voters, but also, the popularity of a universal healthcare plan (single payer, Medicare for All, National Health Plan, or whatever  you want to call it) has been historically supported by an absolute majority of the U.S. population.

However, moderate commentators raise a legitimate concern: is it politically feasible? In an interview after the debate in South Carolina, a journalist noted the staunch opposition to the policy by most Democrats and asked Sanders, “how would you actually pass it?” This is a good question. With all Republicans voting by default against it, just a handful of Democrats opposing it (and there would be more than a handful) would be enough to kill the Medicare for All bill on arrival. Sanders’s response to this question was an unconvincing digression about the many bills he was able to pass during his several years in Congress. The correct answer to this question, though, would have been: “I am going to mobilize millions of people to put pressure on Congress to pass the bill.” However, although Sanders has pointed to the need for mass mobilization to win Medicare for All before, this was not his response this time. The truth is that, giving such an answer would have amounted to declaring war on moderate Democrats and the Democratic establishment on national TV, and, so far, he has avoided such frontal attacks on the enemies of Medicare for All within his own party. Quite the contrary, as he rises in the polls and his chances of becoming the Democratic nominee increase, he has moved to build a more ‘responsible’ and pragmatic politician profile. He has emphasized that his politics are not “radical” and he has associated himself with Obama to fend off attacks from the right with regards to his remarks on Cuba.

You might also be interested in: Insurance Companies Are Bad for Our Health: A Case for Medicare for All

There are, however, millions of people who wholeheartedly support Medicare for All, and many of them share the concern that it will be almost impossible to pass in the current political climate. How, for instance, can the enormous resistance of multi-billion dollar health insurance companies and the loyal service of their friends in Congress, both Republican and Democrat, be overcome? The only possible answer is the mass mobilization of the overwhelming majority of people in the US, those who suffer every day the absurd injustice of the current healthcare system.

Incidentally, if Sanders called right now for a mass mobilization of popular support for Medicare for All, the primaries would be over. How so? Bernie Sanders has won all three primary elections so far, and even the mainstream media is beginning to concede that his chances of winning the primary are quite strong. He enjoys total media attention right now, and hence, he could deliver a message to tens of millions in a moment. At the same time, Medicare for All is his signature policy proposal. I have no doubt that a call to mobilize for Medicare for All would result in  a massive turnout. A several-million strong mobilization for Medicare for All across the country would be the ultimate proof that the program has massive support, that the idea that union members oppose it is a lie, and that the social force to achieve it is right there in the streets, ready to fight for it. If Sanders was able to prove that he could in fact win Medicare for All, the writing would be on the wall, his passage to the nomination assured, and he would be in great standing to face Trump in the general elections.

I predict, however, that Bernie will not do this.  He does not want to “wake up the giant” of mass working-class mobilization. He has not played that card before; not during his many years in congress, nor when the 2016 primaries were rigged against him, and he has expressed several times trust in Congress, in the courts and in other government institutions. The fact that he decided to run on a Democratic Party ballot (for the second time in 2020, after he already had enough of a following of his own) shows far more commitment to the institutions of the American political regime than to a revolutionary transformation of it. This is one of the main reasons why I don’t support his candidacy.

But there are millions of Bernie Supporters—working-class people, immigrants, and people of color—who want Medicare for All to pass. Together they are a social force that cannot be dismissed, and if mobilized in large numbers, they could form a critical mass that attracts millions to the streets to say loud and clear that  health care is a human right. Organizers, supporters and members of the organizations backing Sanders, such as the DSA or Mijente, should demand that Sanders call for a national mobilization for Medicare for All now. This would end the right-wing nonsense about the lack of support for universal health care.

In the end, this is the decisive actor in any fight with high stakes against the capitalist class: the active mobilization of masses of working-class people. If Sanders is serious about fighting for universal health care, if he is not using it as a campaign promise and plans to negotiate it away once in office (as Ocasio-Cortez recently suggested), he should be open to issue such a call. Unfortunately, Sanders is more interested in winning the primaries and the general elections, and gently pushing the limits of what the Democratic Party is willing to give, instead of breaking with the party élites.

As a socialist, I understand the importance of fighting for democratic demands under capitalism, and in particular, of those demands that would alter the relation of forces between classes. Winning universal access to health care would leave workers in the US in a better position to fight for more. And I very much look forward to seeing masses of working-class people flooding the streets fighting for free health care for everyone, forcing their will on status quo politicians in Washington DC. Furthermore, a victory as significant as this one, which implies major concessions from an entrenched and powerful section of capital and, importantly, through the mobilization of millions of working people, would no doubt lift their morale, encourage more people to stand up, and maybe even realize that we need a political organization that represents working-class interests, an independent workers’ party.