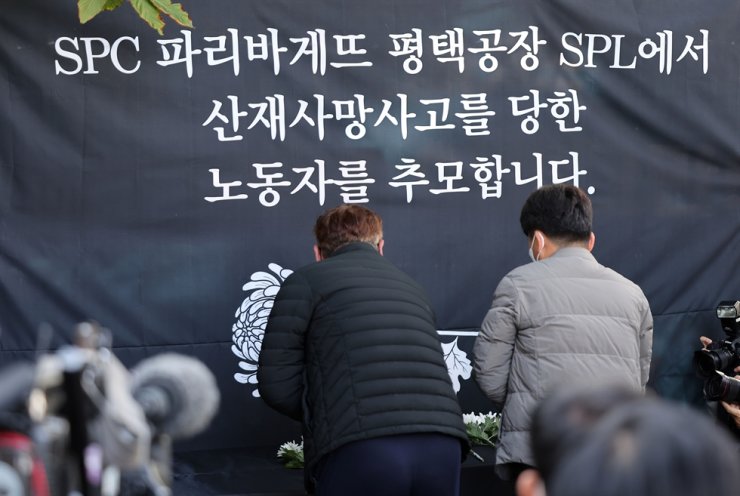 Earlier this month, workers in South Korea launched a campaign for workplace safety against one of the country’s largest food manufacturers, SPC Group. Following the workplace death of a 23-year-old woman at one of SPC’s factories, a consumer-led boycott of the company’s products quickly developed within the country. Revolutionary socialists are playing an important role intervening with an emphasis on organizing the working class.

On October 15, during a graveyard shift at an SPC factory in Pyeongtaek, Gyeonggi province, a 23-year-old woman working at the factory was caught in a sauce mixer she was operating and got pulled in and crushed to death. The following morning, the Twitter account of that factory’s branch of the Korean Confederation of Trade Unions (KCTU) reported that the company simply covered the mixer with a white screen and made employees keep working.

Shortly after the company’s callous response to the workplace death, consumers began sharing pictures of SPC’s many affiliate brands on Twitter, calling for an “SPC Boycott” and “No buy movement.” Despite having limited members and repressive organizing conditions, the KCTU branch in the factory where the death occurred put up political material around the workplace demanding punishment of a high level manager at the factory, as well as the implementation of safety measures to prevent the workplace deaths from happening again.

This workplace organizing spread to other industries. At the Hyundai Motors factory in Jeonju and GM Korea factory in Bupyeong, workers hung big posters and handed out leaflets about the SPC struggle. Workers also organized a signature campaign at workplaces in Ulsan, South Korea’s main industrial city. In a powerful display of solidarity, trade union workers at the Hyundai Motors factory in Ulsan decided to change the daily consumption of 35,000 loaves of bread from SPC to another brand.

As one MTS leader wrote to Left Voice,

After the tragic accident in the SPL factory, public anger was so great that the company had to hold a press conference to make an apology. But the apology was fake because the company’s attitude to the KCTU branches was not changed at all. Therefore, it was a time that needed a finishing blow to the company. At that point, MTS decided to organize a workers’ collective boycott movement from below in other industries to participate in making a finishing blow with workers’ inherent methods.

Going beyond a general consumer boycott, MTS used this sentiment to intervene and organize workers’ collective actions, using a broader campaign led by KCTU specifically around encouraging a boycott of one of SPC’s affiliate brands, Paris Baguette. This was a strategic decision.

There is a recent history of Paris Baguette workers organizing against unfair labor practices and anti-union actions in Korea. In 2017, South Korea’s Ministry of Labor found Paris Baguette to be engaging in “Illegal Dispatch”: directing subcontract workers in its facilities instead of hiring them directly. The Ministry of Labor as well as the National Labor Relations Commission also found that Paris Baguette has discriminated against workers who are members of the KCTU. In one example, Paris Baguette suspended a union official for three months for saying on radio that “Work extensions are not recognized, while health leaves are not properly utilized.”

As a result of the consumer calls for a boycott which went viral on social media, as well as the organized workplace actions, SPC group has been forced to accept some of the KCTU’s demands, including that the company admit to and apologize for unfair labor practices, promise to avoid a recurrence of unfair labor practices, and allow freer use of vacation and guaranteed lunchtime for workers. However, the company is still not punishing management or implementing safety measures at the factory where the worker died. This will require continued workplace organizing and working-class leadership, as well as international solidarity which MTS is calling for.