The trial of Amber Guyger, a Dallas police officer who murdered Botham Jean in his apartment, has sparked protest and controversy—especially after photos surfaced of Guyger being shown compassion and forgiveness by the judge, bailiff, and even Jean’s brother. What is behind the overwhelming theme of forgiveness to people who murder Black people? 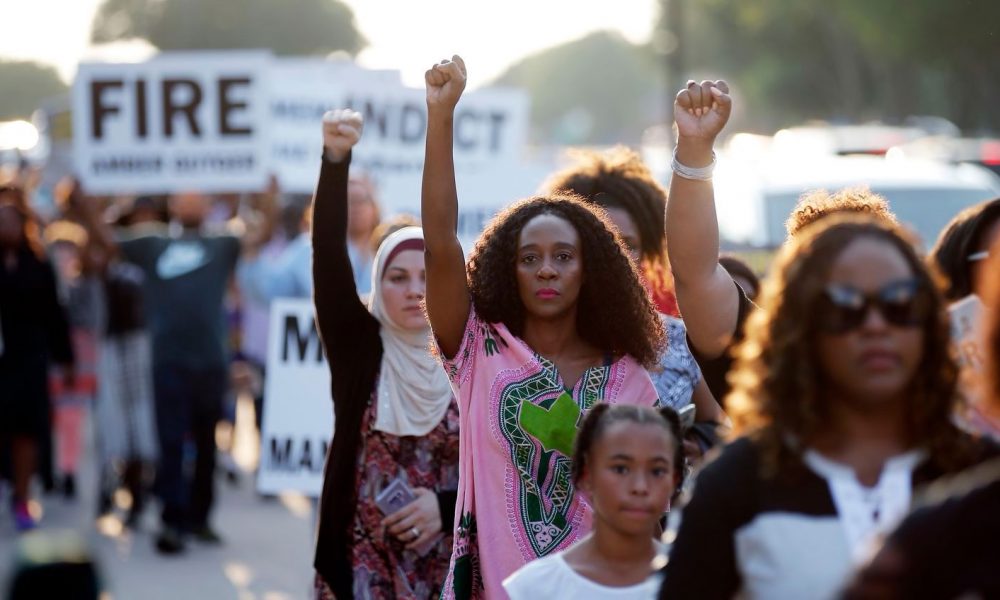 The trial of the year has wrapped up with Amber Guyger, a white former Dallas police officer who murdered unarmed Black man Botham Jean, being convicted of murder. Guyger went into Botham Jean’s apartment on September 6, 2018 and shot him as he ate ice cream and watched television in his home. Guyger claimed she entered the wrong apartment by mistake and thought Jean was an intruder in her home.

Unlike the vast majority of trials of white cops who have murdered Black men, women, and children, Guyger was convicted and found guilty of murder. For once, it seemed that a cop would not be exempt from the criminal justice system. Perhaps a court would unreservedly condemn a white cop for entering a Black man’s house and shooting him in his own living room.

But that illusion was quickly shattered—on October 2, Guyger was sentenced to up to 10 years in prison with the possibility of parole after 5 years.

The disparities between this case and similar cases brought against Black people are immense. Consider Marisa Alexander, who got a 20 year sentence for firing a warning shot (which struck no one) at her abusive partner, or Kelontre Barefield, a Black man who was sentenced to 45 years in prison for killing a police dog. The (in)justice system values the lives of cops over those of Black people in the U.S. White murderers are spared even when the blood is literally on their hands. Dylann Roof, who killed nine Black people as they prayed in church, was treated to Burger King by police in the aftermath of his massacre.

The contrast between this case and others are not confined merely to the sentencing. There are also the shocking photos of Botham Jean’s brother, along with the bailiff and judge—all Black people—embracing the murdering cop in the courtroom. The absurdity of the compassion given to Guyger when young people are carted away for far lesser crimes, screamed at by judges, or called “thugs” for selling weed is striking. Even in the case of Trayvon Martin, the victim was labeled a “gangsta” and a drug dealer by the media despite there being no evidence suggesting that this was true. It is a common narrative for an unarmed Black person to be vilified after their death to justify the police killing them. 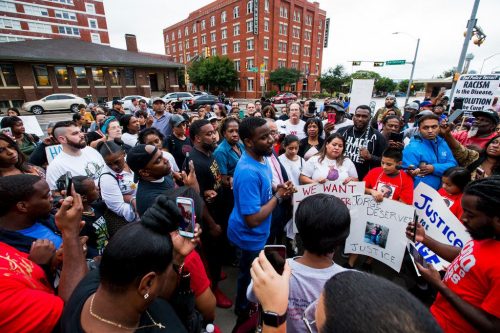 White supremacist society values sympathy for white people at the expense of the never-ending condemnation of Black people. Black people are not immune to this centering of white subjectivity and often enforce the respectability politics used by white supremacy. Black victims are expected to turn the other cheek, while the police, who are the enforcers of racism and defenders of capital, are treated with compassion, given immunity, and have their brutality justified. The police kill with few consequences. They even abuse their spouses without having to worry about arrest.

When the roles are reversed, how often are Black convicted murderers embraced by white judges, white family members, and white bailiffs? Were folks like Mumia Abu Jamal, who was falsely convicted of killing a cop, embraced by the family of the police, or by the judge or police? Did the family wish him the best and tell him they did not want him to spend any time in jail? Of course not. Decades later, the family and Fraternal Order of Police are still out for Mumia’s life. They are not expected to forgive and forget.

Yet not all Black victims of police violence have forgiven their murderers. The mother of Mike Brown was famous for not forgiving Darren Wilson for the murder of her son. Lezley McSpadden stated that Wilson’s acts “were devilish” and that she “will never forgive him.” Consequently, the militant actions of the activists and community in Ferguson in response to Brown’s case were a rejection of traditional, often faith-based calls for “forgiveness” and “calm.” The struggle in the streets, which was met with tear gas and beatings by the police, was a combative break with the narrative of the families of murdered Black people forgiving the killers of their loved ones.

Not only are the cops not expected to forgive, but they are allowed to seek their own justice outside of the law and the courts. Joshua Brown, a key witness in the Guyger trial, was shot dead in front of his apartment complex two days after the verdict. This is the same apartment complex Guyger lived in when she murdered Botham Jean. Many speculate that the police or their supporters assassinated Brown for his role in putting “one of their own” behind bars; not only was his testimony a key factor in Guyger’s murder conviction, but he was also set to testify against the Dallas Police Department regarding their mishandling of the Guyger case.

The fact that there are already suspects in custody for Brown’s murder and that the police reported finding over $4,000 in cash and 12 pounds marijuana in a “drug deal gone wrong” seems even more suspicious. If Brown was a dealer why would he sell drugs outside of his home, a recent crime scene with heavy police activity only minutes from the precinct? Why would he start selling marijuana again knowing the police were upset about his testimony? Why would his killers need to drive five hours from their homes in Louisiana to buy marijuana when the state of Louisiana has already legalized medical marijuana? The Dallas Police Department wanted to silence Brown to keep him from exposing more about the abuses of the police department.

Police departments around the U.S. have a history of making false arrests and convictions, constructing frame ups, planting evidence, and lying outright. These abuses have particularly targeted Black people. Even years after the militant protests in Ferguson, activists have “mysteriously” died or been killed.

Moreover, after their deaths, Black victims of police violence, like Joshua Brown, are blamed for their own murders while the police benefit from changing the narrative. Joshua Brown’s murder is somehow meant to be mitigated by the fact that he was allegedly selling drugs out of his apartment at the time of his death. Instead of Brown’s death being viewed in light of his role as a witness against a majority-white police department, the Dallas Police Department wants people to believe that “Black on Black crime” killed Joshua Brown. “Black on Black crime” is the age-old excuse used to deflect discussions about police murdering unarmed Black people. We demand justice for Joshua Brown and all those who stand up to the police! 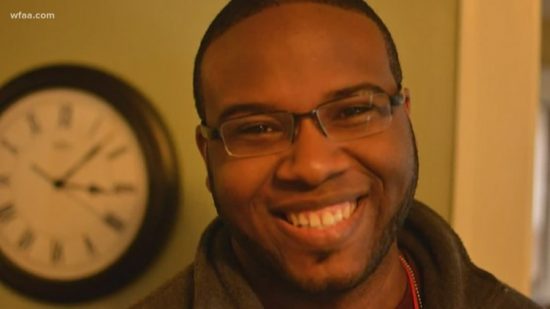 Since the time of slavery, slave masters were interested in finding ways to control Black people beyond physical violence. Enslaved Black people were introduced to Christianity as a means of social control. We were taught to “love our neighbors” and forgive people, i.e. our wealthy white slave-owning masters, even as they whipped, mutilated, raped, and murdered us and our families. The virtue of “forgiveness” was taught to indoctrinate enslaved Black people into submission.

Of course, there are exceptions to this rule. Harriet Tubman and Nat Turner used Christianity to lead armed resistance in the fight to end slavery. They burned plantations to the ground and Tubman freed 750 enslaved Black people. Despite these heroic examples, Christianity’s pacifist preaching has been used as a tool to convince Black people to forgive their murderers instead of resisting them.

Dr. Martin Luther King Jr., whose death Guyger joked about in texts presented during her trial, preached nonviolence, a fact that history textbooks emphasize uniformly. As a tactic, nonviolent resistance won sympathy to the Civil Rights movement. The movement was massive and forced the U.S. government and capitalists to give concessions to Black people nationwide. However, pacifism alone did not achieve the triumphs of the Civil Rights movement, nor was it the only thing King preached. Popular discourse ignores the government’s orchestration of the surveillance and assassination of MLK, as well as King’s role in the AFSME sanitation workers strike, the Poor People’s March, and his vehemently anti Vietnam War messaging; instead they laud him for “turning the other cheek.”

Furthermore, militants like Malcolm X are construed as “preaching hatred” rather than teaching self-defense. The organized nature of the Black Panthers’ defense programs is rarely mentioned, if at all. Meanwhile, the most violent organizations in the U.S.—the FBI, CIA, the police, and hate groups like the KKK—are virtually untouched and are never expected to “forgive” or told to “turn the other cheek.” US capitalist society prefers Black people to be pacifist rather than self-organized and able to defend themselves.

There are undoubtedly personal and understandable reasons for why Botham Jean’s brother chose to forgive Amber Guyger, but the warm embrace from the judge and the soothing hair rub from the bailiff are different. The judge, the bailiff, and the cop are all on the same team: they are defenders of the white supremacist, capitalist state. They are paid to lock up other people—poor, working class Black and Brown people. Judge Tammy Kemp herself was endorsed by the police union, which defends the most brutal police and fights to ensure that cops get away with murder.

People around the US recognize this hypocrisy. The embers of the Black Lives Matter movement flared and the continued militant resistance to the police reignited as people watched the Guyger verdict. Protests and mobilizations erupted in Dallas during the trial. It is becoming clearer every day that the police and the capitalist state are enemies of the working class and oppressed people. It is clear, too, that even people from oppressed communities can legitimize the murderous violence that targets them. 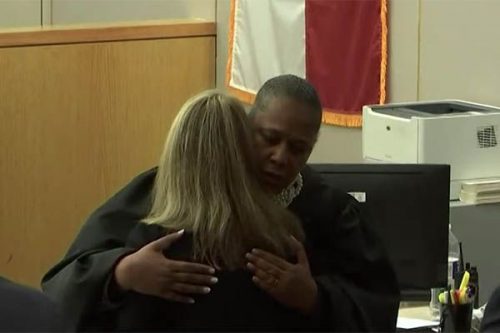 No Hugs for the Police. Only Abolition

Botham Jean was sitting in his home watching television and eating ice cream when he was gunned down by police officer Amber Guyger. Even at home an unarmed Black man is not safe. Yet the tears of Amber Guyger and forgiveness from a judge politically endorsed by police and a bailiff have become the focus of the trial. Botham Jean’s brother also gave Guyger a hug suggesting “maybe one day they could be friends.” Under capitalism and imperialism, the armed killers of the state will never “turn the other cheek” or forgive. When people of any ethnicity, especially Black people, stand up to them, even within the confines of the law, they are retaliated against or gunned down.

The same can be said about fighting capitalism and white supremacy. People of all ethnicities must reject white supremacy, anti-Blackness, and police murder. They cannot stop all of us! And when we are clear that it is the capitalist state and its armed defenders who need to be abolished, then our fight is not simply that of one person but the majority of society. No forgiveness for the enemies of oppressed people. No hugs for the police. Only abolition.