Hundreds Demonstrate for Anasse Kazib and against the Far Right

More than 500 people gathered on Wednesday evening in Paris for a speech by Anasse Kazib, revolutionary candidate for the French presidency. It was a demonstration against the Far Right, which for several days had threatened to prevent the meeting at the Sorbonne from taking place. 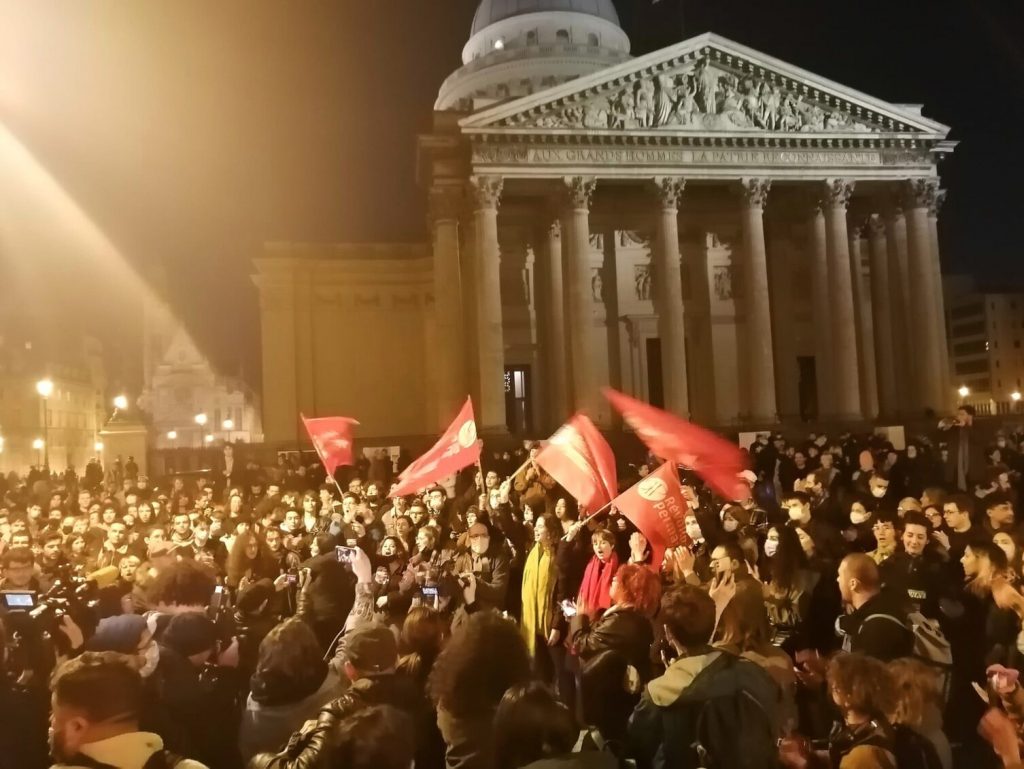 On Wednesday night, a crowd of more than 500 people gathered at the Place du Panthéon in Paris to confront the Far Right’s threats to shut down a meeting featuring Anasse Kazib, the revolutionary Trotskyist railroad worker and candidate for the French presidency. The turnout was so large that the meeting had to be changed to an open-air meeting.

In the runup to the event, the Far Right in Paris had plastered the area with racist and Islamophobic posters attacking Kazib; issued threats against the activists of Poing Levé (Raised Fist); and released a video from Étienne Cormier, former spokesman of Génération identitaire (Identitarian Generation), the old name for the current far-right group Natifs, or Natives, calling for racists to shut down the meeting. The visit of the revolutionary presidential candidate was a day the French Far Right marked on its reactionary calendar.

In response, organizations and public figures spoke out and called for a common front against the Far Right. The event itself was secured by activists from Révolution Permanente, which was joined by other organizations, including the anti-fascist group Jeune Garde (Young Guard), the Action Antifasciste Paris-Banlieue, and Paris Queer Antifa. This spontaneous support turned into a demonstration when there showed up 10 or so activists from Union Nationale Inter-universitaire (UNI), a right-wing group of university students, who had probably planned some sort of action. They were dissuaded by the number of participants and had to settle for taking some photographs under police protection.

Speaking for Poing Levé, the youth organization of Révolution Permanente that organized Kazib’s visit to the Sorbonne, Ariane Serge got the ball rolling. “The fact that a revolutionary worker, a person of color, is speaking at the Sorbonne, in this neighborhood of the Parisian bourgeoisie, sends a strong signal to the Far Right. … Tonight, your spontaneous presence is a demonstration … that in the face of the Far Right, we present a common front.”

With the windows of the Sorbonne as a backdrop, the meeting was then addressed by Youcef Brakni and Assa Traoré from the Truth and Justice for Adama Committee. Brakni spoke of the need to build a political counter-project against the Far Right and its white supremacist discourse. “The extreme Right is afraid of us organizing ourselves, of us creating mass movements, because its interests are with the bourgeoisie. In the face of threats, we must give Anasse Kazib our unconditional support.” He then pointed out that some of the institutional and even revolutionary Left has been reluctant to pledge this solidarity.

Traoré was met with loud applause when she told the crowd, “We will leave no room for them and their racist speeches. We will continue to take to the streets and fight.”

A letter of solidarity from several railway workers and bus drivers was read, and then Sasha Yaroplskaya, founder of YX Media and a transfeminist activist, spoke, denouncing the invisibility of Kazib’s campaign in the mainstream media when the candidacy of Eric Zemmour, “who projects racism and xenophobia, is fully covered.” Yaroplskaya reiterated how important it is that the “anti-imperialist, anti-racist, feminist, anti-capitalist, and working-class” voice of Kazib be fully heard in the presidential campaign.

After these remarks, Kazib was finally ready to speak.

We are getting ourselves into these presidential elections with a crowbar, and that scares them — because we talk about the racism of the state, about the self-determination of LGBTQ+ people, about violence against women, about Palestine, and so on. … We are sending a clear message that society runs because of the working class, and that the bosses who live off our sweat and our precariousness must be expropriated. Workers must be making the decisions.

The railway worker then spelled out, over the next hour, the purpose and program of his candidacy. To the largely student crowd, Kazib emphasized the necessity of an alliance between the youth and the working class, “a cocktail which always frightened the dominant classes.”

In this explosive cocktail, we want to unite the working-class neighborhoods, the undocumented, the LGBTQ+ and feminist struggles. … This is why we are in this presidential campaign. I will not win the election, but we will build a revolutionary bloc for the years to come.

Kazib access to the ballot is endangered by the undemocratic requirement that he garner 500 “sponsorships” from current office holders across France. But in a context of significant right-wing polarization and the xenophobia of the Far Right being given prominence in the media, his voice must be part of the elections. The subversive words of a worker from an immigrant background have a rightful place in the bourgeois, reactionary elections show — as made clear by how many supporters came out to express their solidarity, and by the common front against the Far Right that came together Wednesday night.

First published in French on February 10 in Révolution Permanente.