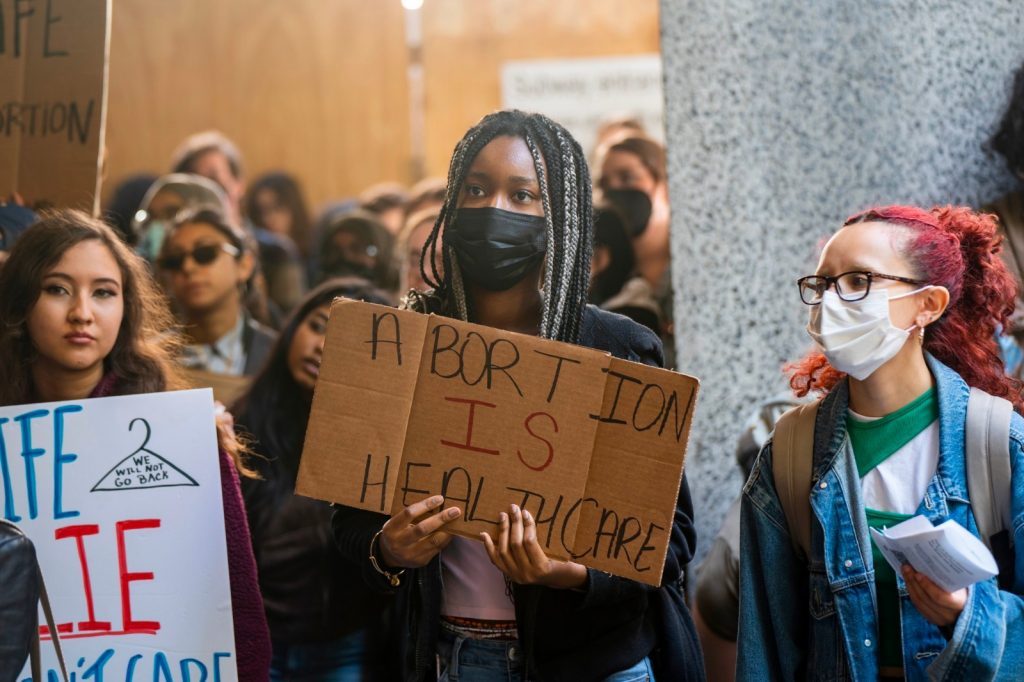 The walkout at Hunter College brought together 300 students and the action at the Graduate Center brought out about 150 people; they organized primarily under the banner of CUNY for Abortion Rights — a grouping formed after the Dobbs decision was leaked to organize the hundreds of thousands of students, faculty, and staff affiliated with CUNY to fight against attacks on reproductive rights and beyond. Several members of other Left and activist groups who are part of CUNY for Abortion Rights played an integral role in the action, including the May Day Student Organization, Left Voice/Bread & Roses, and others. The Graduate Center chapter of the Professional Staff Congress (PSC) endorsed the walkout unanimously.

“Whose CUNY? Our CUNY!” chanted activists who demanded reproductive rights and trans rights, as well as demands for free education for all of New York’s residents.

These actions took place on the day that Barnard College announced that it would provide abortion pills on campus by Fall 2023. This victory is the result of the efforts of the Reproductive Justice Collective, which has been raising this demand over two years.

At the joint campus of Columbia and Barnard, comrades from Bread & Roses, the YDSA, the Reproductive Justice Collective, as well as several campus unions played a role in organizing this action. Speakers advocated for the need to build fighting unions that are prepared to strike for issues beyond their own contract clauses, as well as building coalitions between labor and students to demand reproductive justice on campus and in the community surrounding Columbia, whose real estate development practices have devastated nearby neighborhoods for decades. The students of the Reproductive Justice Collective also reiterated their dedication to the fight to get free abortion pills on every campus, not just Barnard, and to force Columbia to provide reproductive health services to the surrounding community.

At Hunter, one of the organizers, Tatiana Cozzarelli, an adjunct at Hunter College and member of Bread & Roses and Left Voice explained:

We know our power isn’t at the polls voting for our enemies, the Republicans and the Democrats. The seeds of our power are right here. It’s organizing with our co-workers, with fellow students, and professors. It starts right here. It’s the bravery of everyone here who walked out of class. It’s the bravery of the folks who haven’t taken political action before and this week stood up and made an announcement about this action in class. It’s the bravery of folks who know that the solution is in collective action as students and workers in the streets and organizing in our workplaces like this. We need walkouts like this and we need strikes.

The walkouts were part of a national day of action for reproductive justice, which included actions at 50 campuses across the country, organized by the Graduate Student Action Network. The national YDSA joined as a national partner and countless local union and left groups helped organize the action.

The central demands included the right to safe, legal, and accessible abortion, the right to gender affirming healthcare, the right to free contraception, and mandatory sex education.

Other universities took up additional demands. At CUNY, these included free abortion pills available on campus; that CUNY commit to summer externships for medical professionals to train in reproductive healthcare; that CUNY create and support Reproductive Justice as a field of study at the CUNY School of Law; and more.

At Columbia University, the coalition of labor and student groups demanded that Columbia University provide free abortion pills and HIV prevention medication on campus, as well as rescind its institutional support for a proposed womens’ jail in Harlem. They also demanded that Columbia renew the lease of the non-profit Red Balloon preschool in East Harlem – which many Columbia workers use for childcare and early childhood education and whose workers are majority Black and Brown women from the Harlem community.

These actions did not only protest for our rights in the United States: at CUNY, Iranian students spoke about the ongoing feminist uprising in Iran against the authoritarian regime after police murdered Gina Amini. Signs and chants said “Women, life, freedom,” echoing the slogan of the struggle in Iran. As numerous speakers pointed out during the actions, we must stand in solidarity with the struggle in Iran and take protesters’ mobilizations as inspiration.