Hundreds of People #OccupyCityHall to Call for Defunding the NYPD

For the last 24 hours, hundreds of people have been occupying the park in front of City Hall in New York City. They are demanding cuts to the NYPD’s $6 billion budget. An activist reports from the ground. 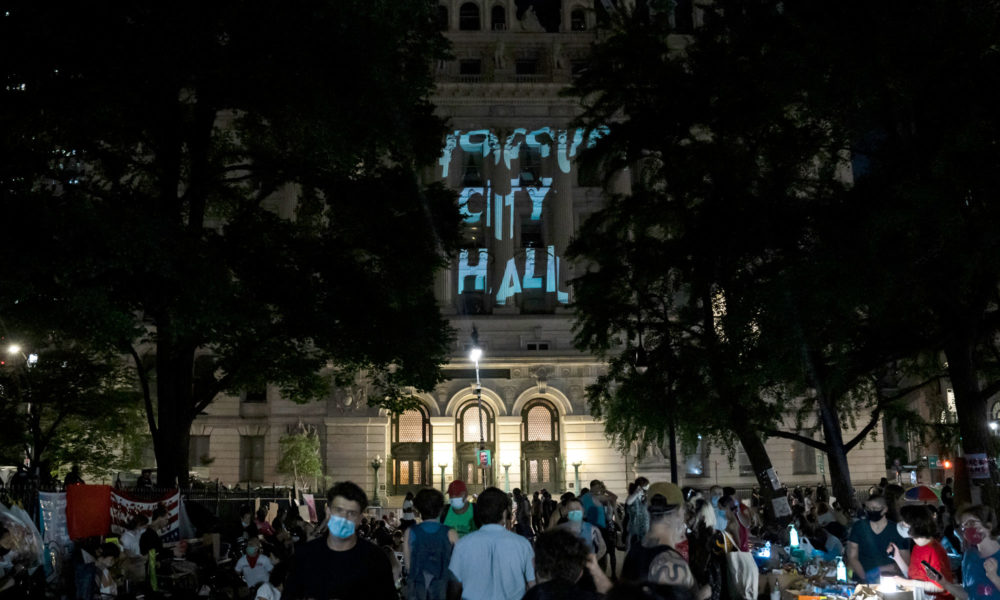 When you get off the 6 train at City Hall Park in Manhattan, you’ll be welcomed by the acronym ACAB spray-painted on the subway station. Dozens of signs line the steel barricades around the park: “Black Lives Matter,” “Abolish the police,” “Black trans lives matter,” and “Power to the people.” Other signs argue: “If we defund the police, where would the $ go? Public education, youth services, shelters, parks, reparations, affordable housing, social workers, CUNY committees etc.” “Abolition requires that we change one thing: everything!”

The hashtag #OccupyCityHall is projected on City Hall in huge letters and music blares from loudspeakers. There are sign-in tables, food tables, snack tables, and drink tables.

Meanwhile, just a block away, there are at least ten police vans. Around the corner, I counted 40 cops laughing and standing around. For now, they’re leaving the occupation alone.

Hundreds of people are milling about, some sitting on the grass and others on sleeping bags on the concrete. There is an art-making station and a dance party. Periodically people begin chanting, taking up the same chants that we have been shouting in the streets for the past three weeks: “What do we want? Justice! When do we want it? Now!”

The occupation in front of City Hall in New York City has been there for two nights. While the first night had well less than a hundred people camped out in the park, on the second the numbers have multiplied. The occupation is getting bigger.

This is part of the Black Lives Matter movement that has exploded in the United States and around the world. Millions of people have mobilized against racism and police violence, increasingly taking up the demand to defund the police. Others demand more, calling for the complete abolition of the police and the system they protect.

The movement, led by young people of color but made up of broad sectors, has faced off against curfews imposed by tear gas and rubber bullets. The movement has organized massive marches and faced off against right-wing vigilantes. Increasingly, the movement is making connections between state terror and other ways that marginalized communities are oppressed under capitalism: Black women’s lives matter. Black trans* lives matter. And in Seattle, the movement created an autonomous zone after taking over an abandoned police precinct, inspiring thousands with the possibility of a world without police.

Now NYC has its own occupation, with hundreds of people taking part. During the day, there are teach-ins and workshops. At night, people sleep in the park. The occupation was originally organized by VOCAL, a NYC-based group that demands that the NYPD be cut by $1 billion. This demand was the impetus for the demonstration at City Hall; protesters promise to continue the occupation until the city council votes for this at the end of the month.

But the current NYPD budget is $6 billion. For many, cutting that by $1 billion isn’t enough. When I arrived at City Hall Park, I was greeted by a friend and the first thing he said to me was, “This is cool, but that $1 billion demand … it’s not enough.” This sentiment was echoed by speakers and signs at the occupation who are demanding the abolition of the police. In fact, the demand was handed down by organizers, not voted on by participants in the occupation.

Indeed, a cut of one sixth is rather paltry. The DSA is calling to cut the NYPD budget in half, as is councilmember Kshama Sawant in Seattle. Mariame Kaba argues for the same in the New York Times.

Cutting the police budget by half is already a major compromise — one that I don’t think socialists should make. As one of the signs in the occupation says, “We mean abolish literally.” The correct budget for the police is exactly 0 dollars and 0 cents. This means building a mass movement of the working class and oppressed to abolish the police and the capitalist system they protect.

As I’m writing this, I overhear the person next to me say something about socialism. The term does not appear on many of the signs, and yet the spectre of communism is haunting New York, and the United States.

Folks have come by with snacks now at this very well-stocked occupation. Even though the protest has just begun, it’s running like a well-oiled machine. I look around at the hundreds of people, some already asleep and others chatting away against the backdrop of the huge Manhattan buildings.

These folks have spent weeks protesting and aren’t tired yet — we can go for more than $1 billion. We have a world to win.