Hundreds of Thousands of Students Join the Climate Strike in Germany, Around the World

The #FridaysForFuture protests have expanded to 1,500 cities in 150 countries. Today hundreds of thousands of students left their classrooms and took the streets around the world. In Berlin, for example, almost 30,000 joined the #ClimateStrike. 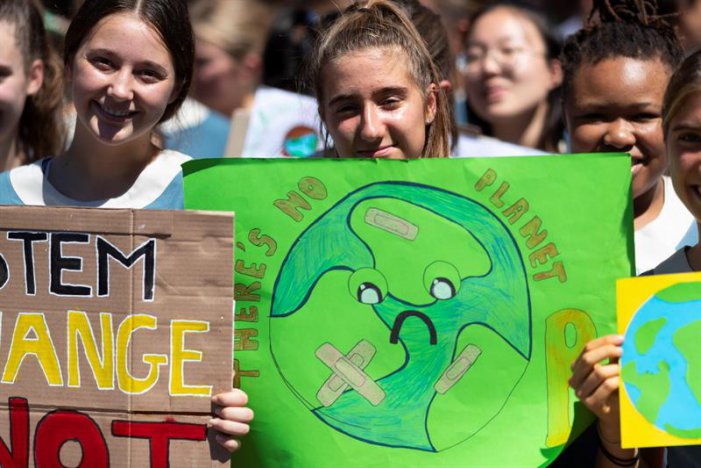 Around the world, youth participated in the #ClimateStrike: The first ones took place in Australia and New Zealand, following the sun over Asia, Africa, Europe, the Americas, with the last ones taking place on Pacific Islands. We can only guess how many school students joined the global mobilizations, but it was certainly hundreds of thousands.

In Berlin, for example, up to 30,000 people took the street, ranging from young children marching with their parents or teachers to young adults shouting anticapitalist slogans. “We are here, we are loud, because you are stealing our future!” they chanted again and again. One sign declared poetically: “Like the oceans, we rise!”

16-year old Greta Thunberg from Stockholm initiated this movement last year with a weekly school strike of one in front of the Swedish parliament. Now, hundreds of thousands of young people are following her example. While bourgeois governments argue that the responsibility for stopping climate change lies with individual consumers, Thunberg makes clear that it is the capitalists and their governments are the ones destroying the planet. At the World Economic Forum in Davos, she said:

Germany has a largely progressive image regarding climate change – Chancellor Angela Merkel has been called the “Climate Chancellor.” This is mostly a lie. While there has been substantial investment in wind and solar power, Germany is simultaneously a world leader in the use of low-energy lignite coal – and according to a recent “compromise”, this particularly CO2-intensive form of energy is going to continue until 2038. The German auto industry produces millions of cars that use fossil fuels.

Merkel called the students’ protests a “very good initiative.” But besides a few good soundbites, her government has done everything in its power to prevent any regulations that would have the slightest negative effect on German industry. Germany’s social democratic president Steinmeier has also spoken out in favor of the protests – and very symbolically took a government jet to travel a few hundred kilometers to attend one.

The neoliberal politician Christian Linder got a lot of criticism for a tweet saying that students should leave the question of climate change to “professionals.” The students understand that the looming catastrophe – which is already becoming visible in the form of unprecedented forest fires and hurricanes – demands immediate and radical changes to the economy. “Professionals” like Linder, in contrast, are more concerned about protecting corporate balance sheets for the next quarter. Capitalist production is fundamentally incapable of organizing the kind of long-term planning that is now necessary.

You might also be interested in A Green New Deal Can’t Save Us. A Planned Economy Can.

Workers have the power

Many politicians have criticized the students for skipping school every Friday for weeks. Can’t they protest on Saturday instead? Numerous signs countered: “Why get an education if there is no future?” These students have understood that striking – interrupting the normal functioning of society – is the best way to make their voices heard. This is something that can inspire the working class around the world. It is workers who have the social power to create a new economy, one based democratic planning to meet the needs of the many, instead of creating profits for a few.

In Berlin, a number of public transport workers joined the protests, using the hashtag #WorkersForFuture. The city’s bus drivers had been on strike the day before, fighting for better wages and working conditions. They said that “the bus strike is a climate strike” – massive investments in public transport, financed by taxing the banks and corporations, are necessary in order to reduce the use of cars. The students also need to show solidarity with the ongoing struggle of the transportation workers. At the same time, the teachers’ union declare their support for the students’ strike, and many teachers joined as well.