Hundreds of thousands of women marched in Madrid in a historic protest against gender violence. The action represented a massive outcry against the terrible increase in femicides and the state´s failure to act. 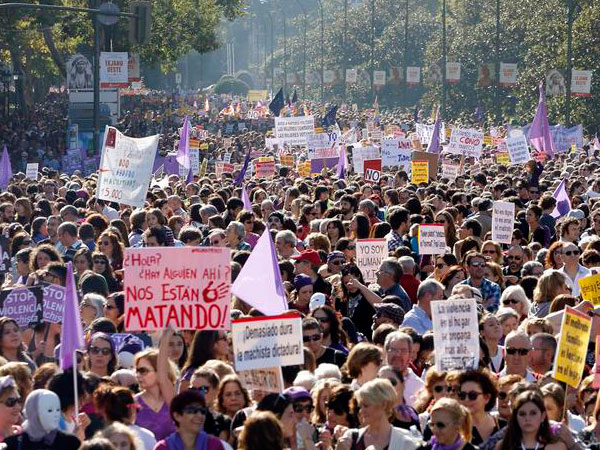 Hundreds of thousands of women, as well as many men, marched through the streets of Madrid against gender violence and to remember victims of femicide in a historic rally.

The march was organized by the feminist movement and women’s associations. The protest was joined by political parties, trade unions, and a multitude of organizations and social groups.

The call for the protest has had a powerful impact which has been expressed on social networks and with many advocacy campaigns. It has had an international impact — with protests taking place in several European cities and throughout Latin America at Spanish consulates and embassies.

There have been more than 100 town hall meetings held in cities like Madrid, Barcelona, and Seville that have approved motions of support for the March. They have committed themselves to addressing violence against women and to improving the funding of services for women.

The Partido Popular (Conservative) and Ciudadanos (Citizens Party – Libertarian) refused to support the march. Organizers said that in Madrid “the PP was against Saturday’s march” and that “Ciudadanos” held its election on the same day of the March knowing in advance that it was scheduled for that day.” This was not a surprising response from two conservative right-wing parties, which boast platforms and rhetoric rife with sexism, homophobia, and the defense of patriarchy.

Instead other political parties joined, such as PODEMOS, the United Left and the PSOE. However, we can not ignore that parties like the PSOE bear a lot of the responsibility for setting the policies and labor reforms that have increased gender inequality. In the midst of their campaign leading up to the December 20th elections they have come to give their support to the march.

One of the main premises of the protest was that “gender violence should be considered a matter of the state.” Among other claims is the need to change the Law 1/2004, which as a law is completely inadequate and does not address many of the existing forms of violence against women.

In this year alone, nearly 100 femicides occurred after a “black summer,” in which nearly 40 women were killed in only three months–a staggering figure that, as stated in the manifesto of the march, “is just the tip of the iceberg.” This number represents the most terrible consequence of a long chain of multiple forms of oppression against women from which the patriarchal capitalist system thrives.

With the current economic crisis, violence against women has increased. Not only were there cuts in specialized services against domestic violence, but also in health, education, and other public services, as well as family allowances which most severely affect women. New labor law reforms have increased the salary gap, female unemployment, and job insecurity. This situation shows not only the passivity of the State to the increased severity of violence against women, but the State´s increasing complicity and responsibility for this profound social injustice.