The union representing 1,400 workers reached an agreement that will mean a total raise of $1.85 after three years. These gains reveal the strength of our class when workers show the courage to go on strike. 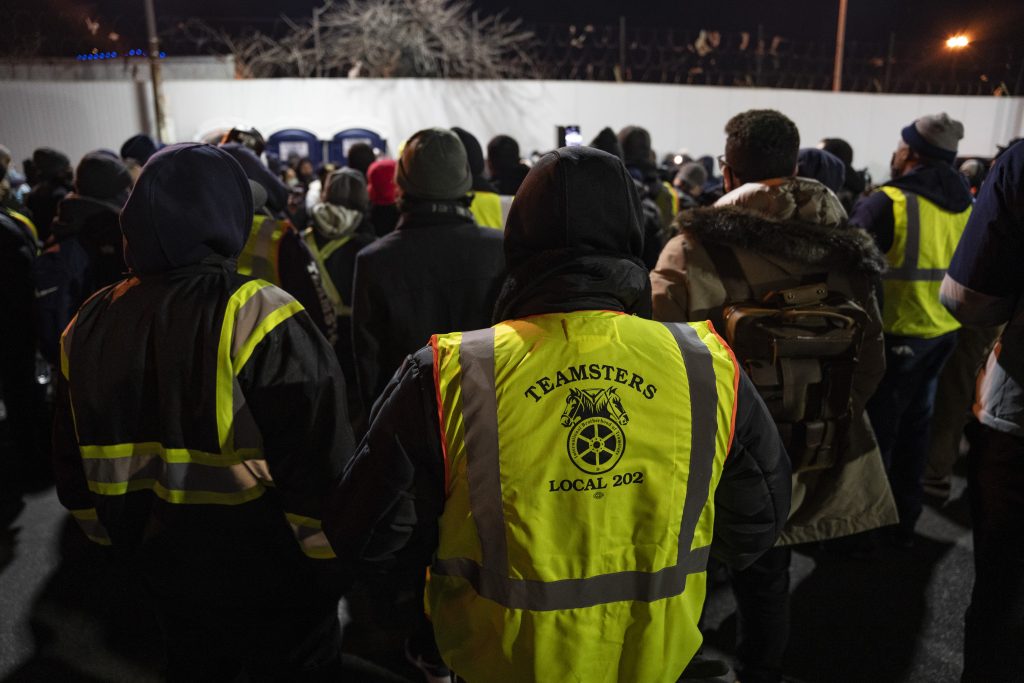 After a week-long strike, Teamster Local 202 union leadership announced that they had struck a deal with managers at Hunts Point Market on a new three-year contract. While the workers initially went on strike for a $3 raise — an increase of $1 per year — the union reached an agreement for a total increase of $1.85: 70 cents the first year, 50 cents the second year, and 65 cents the third year. Additionally, despite an attempt by the bosses to make workers pay more for healthcare, workers will continue to pay their current contributions.

The workers were able to wrest an extra personal day and two extra sick days per year from the company. This is an improvement in the quality of life of workers who spend long hours exposed to freezing cold temperatures and sweltering heat. As the workers denounced, these companies do not even offer basic supplies such as gloves.

Further details of the tentative agreement are not yet available as of this writing.

The bosses originally proposed an insulting annual 32-cent wage increase, which instigated the strike. Throughout the week, the workers effectively slowed or even stopped much of the produce distribution from Hunts Point Market. These are overwhelmingly Black and Brown workers, many of whom have worked at Hunts Point for decades. Some are immigrants who only speak Spanish, but stand in solidarity side by side with their U.S.-born co-workers. Workers at Hunts Point began to flex their working-class “muscles” and feel their strength — they make all of society run, not the bosses.

On the first night, the workers blocked traffic and six people were arrested. Reminiscent of the Black Lives Matter (BLM) uprisings, they chanted “Hands up, Don’t Shoot.” Two days later, they successfully turned around a large produce bus and garnered solidarity from workers and young people from around New York City who joined the workers on the 24-hour picket line.

Although the workers did not win everything they fought for, the demands that they extracted from the bosses are a win. The victory serves as an example for the working class in New York and the United States at large that bosses don’t give us anything willingly, but the working class can fight — and win. The workers at Hunts Point recognized this and used their power as workers to grind production to a halt and force the bosses’ hand.

Hunts Point Market plays a central role in the supply chain of the entire Northeastern United States. It’s the biggest wholesale distribution market in the world, supplying 60 percent of the food in all of New York City. The essential workers at the market played a critical role in keeping the city and tri-state area running during the pandemic, supplying millions of households with food despite the risks to their lives. More than 300 workers contracted Covid-19, and six died. And yet, these workers didn’t get hazard pay, and they still don’t have access to the vaccines. In fact, one of the striking workers told us that he thinks that New York should guarantee the vaccine distribution in essential workplaces, such as Hunts Point Market, and not throw them away, as NYC has done.

Most of the unionized workers at Hunts Point Market earn around $18.57 an hour. Meanwhile, their bosses are multi-millionaires, making huge profits off of their workers’ labor. The market received $15 million in Paycheck Protection Program loans from the federal government, none of which went to the workers. The demand for an annual $1 raise was wholly insufficient to deal with the rising costs of living and the impact of the crisis on their lives and their families. A $1.85 raise over three years is most certainly not enough either.

The bosses exploited the widespread fear of unemployment and economic uncertainty to put workers against a wall, telling them that they should be thankful they have jobs. This scare tactic usually works to keep workers from striking. It didn’t this time, but it did keep workers from staying on the picket line until all their demands were met in full.

Their gains were possible due to their strength as a class and courage to go on strike — the first strike at Hunts Point in decades. But, as any worker can tell you, their morale and resolve were strengthened by the hundreds of people and organizations who came to the picket line every day in solidarity. Many of the young activists who showed up to support the strike also took part in the BLM movement last year, showing how both fights are connected and how solidarity can strengthen workers’ actions.

The striking workers weren’t the only ones that Local 202 President Danny Kane thanked and congratulated. At noon today, after the contract was ratified by a majority of the workers present, he thanked New York Governor Andrew Cuomo for his involvement in the workers’ struggle. He called him an “advocate and friend of organized labor in this battle,” and part of “the type of politics our country needs. We have it on the state and at the national level,” giving more than a nod to the Democrats and the new Biden administration.

This is the same governor who recently said he will not shut down the economy because of the coronavirus, putting profits over lives, just as he had since the pandemic began in the spring. Cuomo also refuses to cancel rent, and sent the police to arrest and beat BLM protesters over the summer. Recall that the city offered the bosses at Hunts Point Market a significant police presence during the strike, ready and willing to stop any escalation.

The union leaders who make big bucks and don’t work at Hunts Point Market were announcing a victory yesterday, before the workers were even able to see the contract, much less ratify it. At a rally last night, President Kane said, “A good contract is the one you fight for. We won yesterday before we knew any terms.” But as any worker can tell you, the fight doesn’t put food on the table. He went on to say, “Please believe me, [the fight] is more important than a little nickel here or a nickel there, it’s what you did.” It was not a nickel; it was $1.15 less in the new three-year contract than the workers initially demanded.

This is a big problem. It’s not up to the union leadership — and certainly not up to AOC — to decide if workers won a strike. It’s up to the rank-and-file union members of Hunts Point Market to deliberate, discuss, and democratically decide. I don’t say this to be contrarian, or to spoil good news, but it’s an important lesson for future struggles. Workers are the ones who create passive profits for the bosses. They are the ones who disrupted those profits by going on strike,  and who hold a central position in the chain of distribution. They are the ones who should decide when a strike is over.

While there was some inspiring support from Teamster members and locals, the national Teamster union did nothing to strengthen the struggle despite their size and power. Calling assemblies in important transport companies such as UPS and Amazon, and carrying out actions in solidarity — such as blockades — would have made a huge difference. The strength and possibilities in the hands of the workers is even greater.

The workers I spoke to are relieved to have won a raise and happy to get back to work. They are proud that they were able to wrest new gains from a management that was willing to give little to nothing. They are confident in their strength as workers. But they are conscious that the initial goal was not achieved and know that there will be more battles to come.

As they entered the market to ratify the contract, they chanted “202” and held their heads high because they exposed the greed of the employers and showed the potential of the working class to face the crisis. Through this experience, they pushed for a strike, the likes of which had not happened at Hunts Point in 34 years, and increased confidence in their strength to prepare for future struggles. As many of the workers said themselves, this experience showed them their collective strength.

Undoubtedly, the Hunts Point Market workers are an inspiration of struggle for the millions of workers in New York who will have to face bosses who continue to put the weight of the crisis on our backs, and continue to expose us to the virus and its economic and social consequences.