In his controversial and poorly attended rally in Tulsa, President Donald Trump said he will urge to slow down testing for Covid-19. Now federal funds for testing are being cut, even as we face a massive second outbreak of coronavirus. 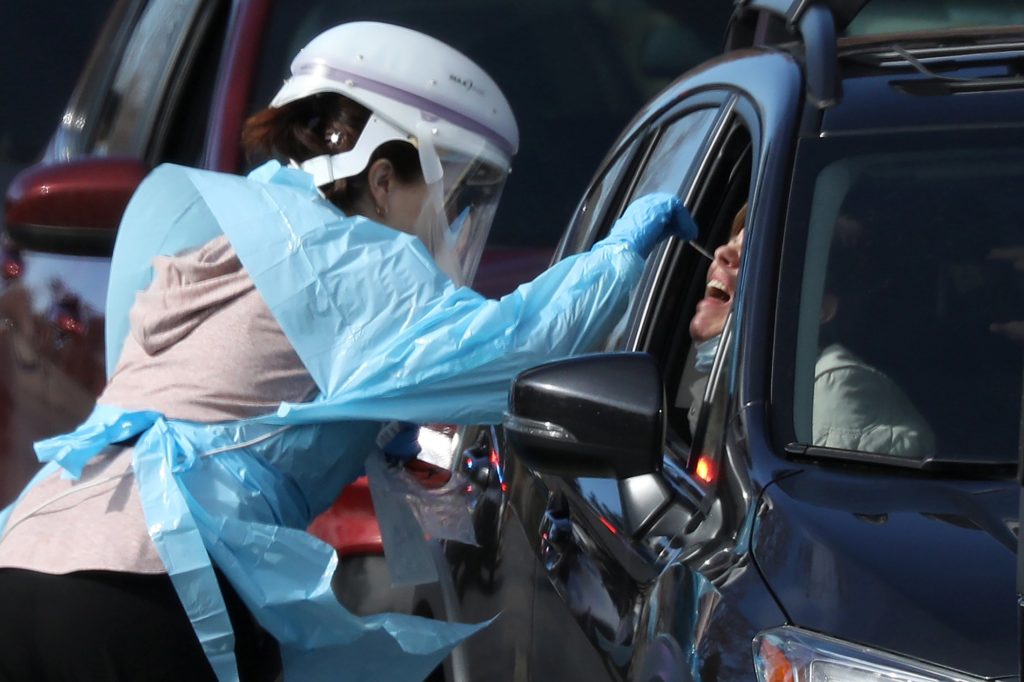 Donald Trump opened a new chapter in his denial of the coronavirus pandemic. In his speech at his recent campaign event in Tulsa, the president said: “You know testing is a double-edged sword (…) When you do testing to that extent you’re going to find more people, find more cases. So I said to my people: ‘Slow the testing down please.’”

His statements were criticized in the media, and several officials who were consulted said it was a joke. However, Trump later stated that he doesn’t “kid” and tweeted that “the cases are only increasing because there are large numbers of tests.” The Department of Health and Human Services has announced that at the end of June it will stop sending funding for 13 drive-through testing sites, most of them located in Texas, according to CBS news. HHS officers claim that this will be an exception and that there will be more testing sites overall.

Bafflingly, the announcement about wanting to slow down testing is in direct contradiction with Trump’s own  statements about how mass testing in the U.S. is evidence of the supposed success of the U.S. response to Covid-19. Trump had stated weeks ago that the country is providing record numbers of daily tests, supposedly in contrast with China, which is alleged to manipulate its pandemic statistics. Now he wants to remove one of the most basic, most important tools in the fight against the coronavirus by cutting the government support for testing sites.

The states that reopened first and have had a more lax response to the pandemic are today the most affected: Idaho, Montana, Oklahoma, Texas, and Arizona have experienced an increase in cases of between 75% and 107% over the previous two weeks. Furthermore, infections throughout the country broke another record this Tuesday, exceeding 2,300. Republicans who oppose the lack of testing are not worried about the health of the population, but about the ballot box: the red states are among the main hotspots of the pandemic. However, governors across the U.S. have resumed activities in whole or in part with the objective of “protecting the economy” —-an objective that is mainly aimed at guaranteeing the profits of the capitalists and avoiding having to pay out  unemployment benefits.

Health advisors like Anthony Fauci, representatives from laboratories and pharmaceutical companies, the Democratic opposition, and even various voices within the Republican Party have stated that testing is more necessary now than ever. Among the critics of Trump’s decision are some of the most conservative senators in the Republican Party, such as Ted Cruz and John Cornyn, who as representatives from Texas are asking the government to continue funding testing there. Texas is reporting almost 6,000 positive cases and has paused the reopening of normal economic activity.

The ending of mass testing would be a criminal measure that threatens people’s health and sabotages any kind of coherent response to the pandemic in the U.S., which today accounts for 20% of all cases worldwide, despite the fact that it makes up only 4,3% of the global population. However, this is merely the tip of the iceberg of a policy of carelessness against the working people and the poor masses of the country, among whom access to healthcare is impossible for millions and who are the most vulnerable to economic hardships and health risks.. Of these sectors, the Black community is the most affected, with the aggravating factor that the police measures put in place have exposed them even more to the police brutality that has sparked the massive anti-racist protests since the assassination of George Floyd in Minneapolis.

Trump’s response also encourages the fundamentalists and science skeptics  who have been reacting to such health measures as the compulsory wearing of masks in public places. There are already groups in Florida (which is reporting nearly 5,000 cases daily) who claim that scientists are going against God’s laws by urging people to wear masks. Denial, contempt for the lives of workers, and policies that prioritize capitalist profit  continue to lead masses of people to be exposed to enormous health risks. To counter the reckless and brutal approach of the State, healthcare and frontline workers, along with the millions of young people taking to the streets against racism, continue to demand a stronger response to the pandemic, including an expansion of testing under healthcare workers’ control.