“I Got My Civil Rights”: The Supreme Court’s New Attacks on the LGBTQ+ Community Show the Limits of Liberal Reformism

As the Supreme Court considers rolling back protections against LGBTQ+ discrimination, working people must continue to demand and defend those rights on the streets and in their workplaces. 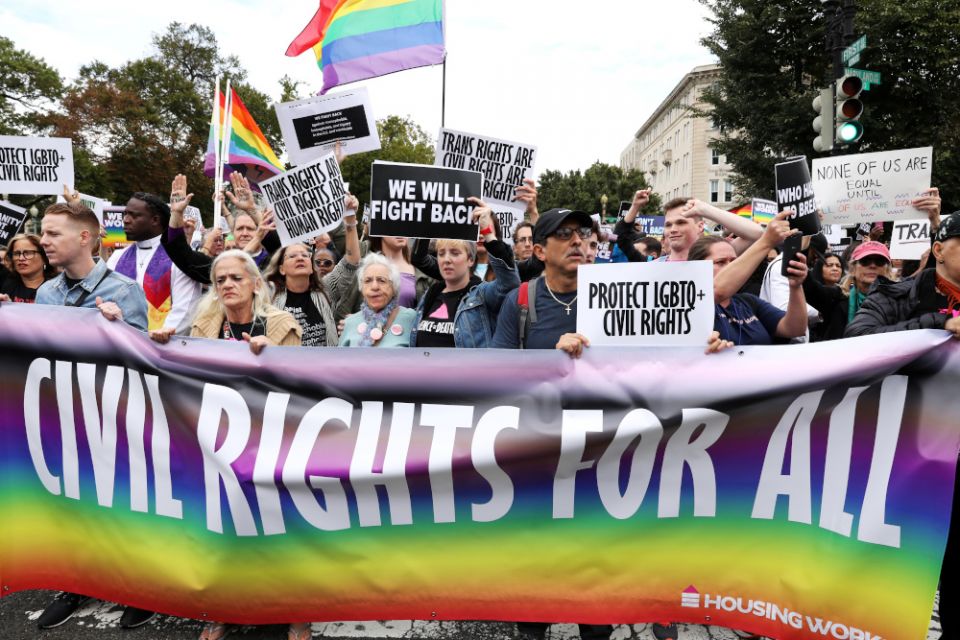 At the beginning of the Stonewall Riots, Marsha P. Johnson—the Black trans woman who many credit with beginning the riot—allegedly shouted  “I got my civil rights!” The idea behind this rallying cry is that civil rights do not come solely from politicians voting to give a community basic protections but, rather, from the community rising up in solidarity and demanding that these rights be respected. This is a key difference in strategy and outlook between the radical and the liberal wings of the Queer Liberation Movement. The liberal wing argues for a respectability politics intended to make queer civil rights more palatable to those with power and, through this strategy, they rely on the state to grant them their rights. The radical wing, in contrast, favors activism and class solidarity to demand those rights. To view reforms as being entirely in the hands of elected leaders (or unelected in the case of the Supreme Court) inherently limits the reforms to whatever the ruling class wants them to be, and makes them easier to revoke. For example, during the Obama administration, we saw some meaningful reforms, notably same-sex marriage and some workplace protections. However, as recent events show, trusting a court or a group of politicians to protect reforms is a doomed proposition. Since Donald Trump took power, there has been a steady roll-back of the Obama-era reforms; this trend continued this week when the Supreme Court took up the issue of workplace discrimination against the LGBTQ+ community.

Oppression Was the Case

Yesterday, the Supreme Court heard initial arguments for three important LGBTQ+ rights cases: Altitude Express Inc. v. Zarda, Bostock v. Clayton County, and R.G. & G.R. Harris Funeral Homes Inc. v. EEOC. In the first two cases, the plaintiffs (Don Zarda and Gerald Bostock) were fired from their jobs after their employers found out they are gay, and in the third, the plaintiff (Aimee Stephens) was fired after coming out as a trans woman at work.

There is no federal law protecting LGBTQ people from employment discrimination. Only 22 states have laws protecting LGB people, and only 21 states include trans people under these protections. Previous employment discrimination cases have relied on case law—that is, previous court decisions that interpret existing laws (like Title VII of the Civil Rights Act, which protects people from workplace discrimination “on the basis of sex”) as applying to LGBTQ people too. SCOTUS decisions in favor of the employers in these three cases would undo decades of legal precedent and provide legal backing for overt bigotry in the workplace. This is not to say that oppression against LGBTQ+ employees is not happening currently; it just happens more covertly. The Supreme Court could, with this case, open LGBTQ+ workers up to even more abuses and dangers.

A Major Threat to All Workers

The stakes in these three cases are not quite what they seem. If SCOTUS rules in favor of the plaintiffs, it is less a “win” for LGBTQ people than it is simply “not a loss.” Such a ruling would affirm previous legal precedent and maintain the status quo, rather than adding new legal protections or changing the everyday working conditions of LGBTQ people. However, if SCOTUS rules in favor of the employers’ right to fire the workers in question, LGBTQ people around the country will have even less legal recourse for mistreatment, and employers will be free to act as homophobic and transphobic as they wish without fear of (federal) legal repercussions. Just as many people viewed Trump’s election as a validation of their racism, leading to an uptick in overt hate speech (and hate crimes), an anti-worker, anti-LGBTQ SCOTUS decision could have a similar effect if people view it as a federal sanction of their bigotry.

Additionally, while such a ruling would be primarily used against LGBTQ people, it has repercussions for cis and straight people too. The arguments made by the defense are using the language of equal treatment to uphold sexual stereotypes, all in the name of “employers’ rights.” They maintain that employers ought to be allowed to discriminate according to gender or sexual presentation as long as employers also apply corresponding discrimination to someone of another gender or sexuality (that is, they ought to be able to demand that women live up to feminine norms as long as they also demand that men live up to masculine norms). This means that straight, cis people who are not gender-presenting in the way that their employer thinks they should be could also be subject to firings or other repercussions.

Even if SCOTUS does rule in favor of the workers, the lives and livelihoods of LGBTQ people—or any people—should not be in the hands of nine unelected judges that serve for life. Both legislation and judicial interpretations are shaped by the social norms of their time and place, and so they are decided in the interests of the ruling class; moreover, they determine only what is legal—not what is in the interests of the masses. Consider the case of Plessy v. Ferguson (1896), in which the Supreme Court ruled that racial segregation was constitutional. Brown v. Board of Education, which overturned the Plessy case, was not decided until 1954, more than fifty years later.

We Don’t Have to Sit Idly By

It is disempowering and too slow to wait with bated breath while our futures rest in someone else’s hands; one of the plaintiffs, Don Zarda, passed away in 2014. Five years later, his case has still not been resolved. We do not have to wait; we can change things right now, by demanding equitable treatment for our coworkers, as the men at the MadyGraf factory did when one of their trans coworkers was forbidden from using the women’s bathroom at their workplace.

Capitalism demands that everyone work—and work hard—in order to survive. If SCOTUS determines that employers can fire or refuse to hire LGBTQ people on the basis of their gender and/or sexual orientation, they are meaningfully restricting the ability of LGBTQ people to survive under the current system.

What we are seeing in this instance is not unfamiliar. Once again, vulnerable and marginalized people are asked to sit idly by—full of worry, anxiety, and dread—as the ruling class argues on the national stage about whether or not they deserve basic human dignity. Then, if the court rules against the workers, the LGBTQ+ community will be told that we are supported and that this ruling shows why it is important to vote in the next election; and maybe, if we do not step out of line and offend anyone, they might consider giving us back some of our rights.