By using undemocratic voting measures, public pressure, and delaying tactics, the IATSE bureaucracy overrode the wishes of the membership to ram through a terrible contract. This is a betrayal of Halyna Hutchins, and all the IATSE members who voted to strike and who are demanding safe working conditions. 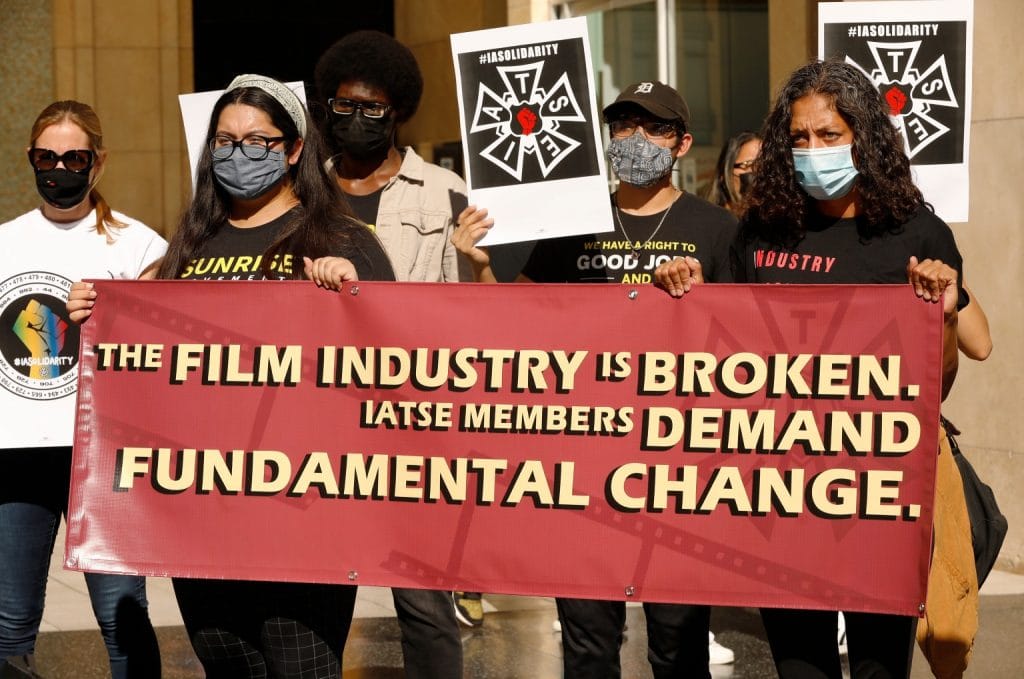 The ultra-controversial International Association of Theatrical Stage Employees (IATSE) tentative agreement has been ratified — but only because IATSE’s bureaucracy mandated a completely undemocratic  system for the vote. This system of voting — which assigns proportional “delegates” to each local in what is essentially an electoral college-like system — resulted in a split between the official delegate vote (58 percent voted yes to the basic agreement and 42 percent voted no) and the popular vote (where 49.6 percent of the membership voted yes and 50.4 percent voted no). In other words, the basic agreement (the core part of the new deal) was ratified by the union leadership despite the fact that a majority of members voted no. The other part of the deal, the area standards agreement, narrowly passed both the delegate and popular votes.

This is a betrayal of the wishes of rank-and-file IATSE members, who just weeks ago voted overwhelmingly to authorize what would have been the first strike in the union’s history. The rank-and-file were fed up then and they’re still fed up. Fed up with poor working conditions, long hours, low pay, and diminishing benefits — all things that have been worsening with each successive contract. They were ready to strike, a strike that would have brought  the entertainment industry to a grinding halt and potentially rewritten the way it operates. It also would have been  the biggest strike since the recent uptick in labor struggle began in September.

But the IATSE leadership has tossed all of that power and all of that militant energy aside in order to cut a deal with the bosses that doesn’t address any of the most important demands of workers. The new agreement does not reduce the number of work hours, the 3 percent pay raise is less than the rate of inflation, and there are no increases in streaming residuals — essentially profit sharing for streaming shows that go to fund IATSE pensions and health plans. To call this contract insufficient is an understatement. It will only continue the hyper-exploitation of IATSE workers. And the IATSE leadership agreed to it and then put their thumb on the scale to make sure it passed.

Adding a tragic element to all of this is the death of Halyna Hutchins, an IATSE member who was killed when a prop gun misfired on set last month. Hutchins’s death came in the midst of the debate around the TA and, for many, represented the stakes of what was being fought for. Hutchins died because of the unsafe conditions in her workplace, conditions that continue to go unaddressed. And yet  the IATSE leadership never took up Hutchins as a figurehead of the struggle, essentially buying into the bosses’ narrative that the problem was the presence of firearms in general on set, not that, to save money, the producers had replaced union workers with untrained workers who didn’t properly follow safety procedures. The IATSE leadership issued their statement of grief and then never brought her up again. This is an insult to Hutchins, her co-workers, and her union. She deserved a safe workplace and her union leaders refused to fight for it.

During the height of the debate over the TA, IATSE president Matt Loeb’s name trended on Twitter, with many demanding his resignation. Without question, Loeb must resign immediately, as he doesn’t represent the interest of the workers. He should be replaced by a vote from the rank and file, not the appointment process that put Loeb there in the first place. Loeb, like the other mis-leaders of the labor movement, is highly paid and has much more in common with the bosses than he does the rank and file. Loeb, and other bureaucrats like him, consistently act to limit, abort, and betray potential militant action and subvert rank-and-file democracy. Rather than being interested in building actual working-class power, union leaders are more interested in cutting deals with the bosses and supporting the Democratic Party. From IATSE to John Deere, rank-and-file union workers need to confront these leaders in order to rebuild a fighting labor movement.

This doesn’t mean that workers should abandon unions; after all, there are few organizations that can give the working class as much organized power. . But workers must fight to retake their unions from the bureaucrats who make hundreds of thousands a year and trade away worker protections in back-room deals. As long as the mis-leaders of the labor movement continue to lead un-opposed, the labor movement will always be limited in what it is able to accomplish.

It is also essential that workers fight for greater rank-and-file democracy. These anti-democratic electoral college systems only serve to make it easy for the labor leadership to force through bad deals. What is needed instead is direct votes from the workers — where every worker gets a vote — and assemblies where workers can come and openly debate and discuss the contracts presented to them. In addition, the leaders of the labor movement and the negotiating committees must be recallable by the membership, which will hold them accountable in situations like this where they act against the best interests of the rank and file.

IATSE workers should take heart, however. We have seen what they can do when they are organized. They overwhelmingly agreed to strike and were ready to shut down the industry. This power does not go away — in fact, the labor power that IATSE workers possess in Hollywood is almost unprecedented or unparalleled in the industry, and they should use it.

The mis-leaders, as they always do, will wring their hands and say that the workers are asking for too much. But we have seen whose side the labor bureaucracy is on, and it’s not the side of the workers. The IATSE leadership betrayed their members, in open daylight, and then relied upon an undemocratic voting process to push through a terrible contract. This should never be forgotten. The workers of IATSE are powerful and they scare their bosses and their mis-leaders.