“IATSE’s Struggle Is Everyone’s Struggle”: Interview with a Worker

From October 1 to 3, members of the International Association of Theatrical Stage Employees (IATSE) will vote on whether to authorize a strike. Left Voice spoke with one IATSE worker about the situation that IATSE workers face and why they are taking this strike vote. 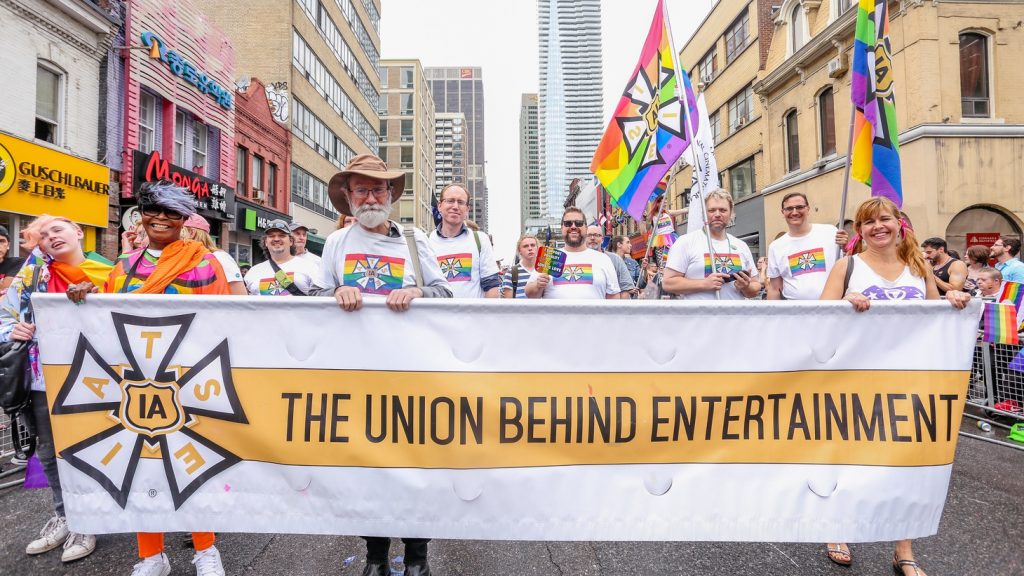 Left Voice spoke with a member of the  International Association of Theatrical Stage Employees (IATSE) about the strike authorization vote happening now.

Would you talk a bit about the work that IATSE members do?

Simply put, IATSE is a coalition of most of the below-the-line Hollywood crew members. There is the Screen Actors Guild, SAG, for actors; the Writers Guild of America, WGA, for writers; the Directors Guild of America, DGA, for directors; the Producers Guild of America, PGA, for producers, and IATSE — the International Association of Theatrical Stage Employees — for almost everyone else. That means camera crew, props, editors, costumes, production design, grip and electric, writer’s assistants — they don’t get to be in the same guild as the writers — etc. are all in IATSE.

“Below the line” is a term usually used to describe who gets residuals.1Residuals are an industry term that refers to pay film and TV workers receive after the fact when the work re-airs. Above-the-line crew get residual checks in the mail, whereas those in IATSE have their residuals go into a large pot that is used to help provide our amazing healthcare and pension plan. There’s more nuance to it than that, but that’s the gist of it.

Tell us about the strike authorization vote.

This is the first step to letting the Alliance of Motion Picture and Television Producers, AMPTP, know we are serious about our demands. The process is two-fold. We must first vote to authorize a strike, and then let the AMPTP counter and come back to negotiate with us if they are willing. If they don’t want to negotiate, a second vote will go out where we can choose to actually strike. The difficulty is, as mentioned before, many crew members make less than $20 an hour. A strike would be an enormous burden on folks that are already living paycheck to paycheck. No one wants to strike. We love our jobs, and many of us moved to Los Angeles or New York City from far away, and have given up so much to be in the industry we love. That said, if it comes to it, I will definitely be voting to strike.

For instance, streaming services still whine that they are “untested” and call themselves “new media,” which is just as ridiculous as calling television “new media” in the year 1980. Facts are facts, and network TV is dying. Streamers need to step up and pay the crew what they deserve.

What are your demands? Why are these important?

The demands are simple. We want 10-hour days instead of 16-hour days. We want enough time to sleep, see our families, and take care of our bodies and souls. We want better wages — $16 an hour in Los Angeles is simply unacceptable for a skilled IATSE crew position! Most of us have to pay dues to get into a local. And mostly, we want to be able to trust that our healthcare and pension plan remains fully funded. Currently, the reserves are dwindling at an unprecedented rate because the streaming services have negotiated a deal that because they are “new” they don’t have to pay our residuals. We all know that in 2021, most shows are on streaming platforms. This is unsustainable.

Why should other workers support your struggle?

IATSE’s struggle is everyone’s struggle. As Amazon, Disney, Apple, and other conglomerates continue to merge and grow, they have the power to treat humans like machines. Without checks and balances, these companies will continue to rake in billions of dollars and not give back any of it to the average joe. It’s been shown that they are willing to pay millions to big actors, writers, and directors, whose star power will help them make even more money.

But when a grip dies on his way home from working a 19-hour shift because he fell asleep and ran into a guard rail, the producers have a moment of silence and move on. Some parents never get to see their children or spouses. A script coordinator lives out of her car because she doesn’t make enough to pay rent, even working overtime. Something has to give.

These companies employ thousands of people in other sectors, as well, who are treated as disposable. There has been plenty of press about how poorly Amazon’s factory workers are treated. Sadly, crew members on Hollywood TV shows and movies are treated very much the same.

What do you want our readers to know about your struggle?

My struggle is everyone’s struggle. I am not special. We are all in this together.