ICE and COVID-19: A Deadly Mix For Immigrants

Even during a pandemic, the Trump administration is continuing to attack undocumented immigrants and is tightening legal pathways to immigration. 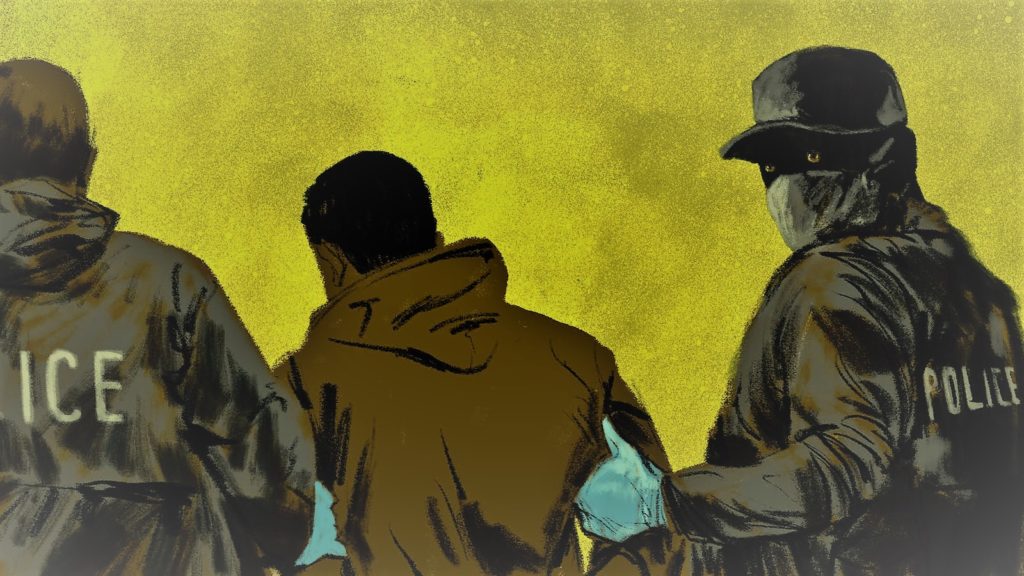 At a time when immigrant communities throughout the U.S are bracing themselves for a public health crisis and financial uncertainty, the federal government continues to hunt down and terrorize undocumented immigrants. Because we are heading into an election year, the Trump administration is amping up its immigration crackdown to shore up votes among its right-wing base. The government has signaled that it is going to be further restricting the legal paths to immigration that are available. In an unprecedented escalation on April 20th, Trump tweeted an executive order banning all immigration to the US for 60 days. Then on April 23rd, the Washington Post reported that Senior White House adviser Stephen Miller told surrogates in a private call that President Trump’s 60-day order is just the first part of a long-term plan for changes to U.S. immigration policy. Meanwhile, teams of Immigration and Customs Enforcement officers (ICE) are now showing up in larger numbers at homes early in the morning, arresting people on their way to court and passing themselves off as cops in an almost militarized frenzy. On March 27th, the Intercept warned of a significant spike in immigration arrests and noted that the number of initial court appearances of individuals in detention in February and March is more than double what they were in December and January. Despite dire warnings about the impact COVID-19 would have on detainees, their families, attorneys, ICE agents, and corrections officers, ICE has ramped-up enforcement and continues to fill its jails and detention centers with people from communities hardest hit by the coronavirus.

COVID-19 has certainly added another urgent dimension to an already violent and inhuman immigrant detention system and puts immigrants and immigration workers at risk. Indeed, ICE’s networks of jails and detention centers are woefully unprepared to handle a highly contagious medical emergency; they were described by whistleblower doctors as a “tinderbox” that has already become a hotspot for outbreaks of the COVID-19 respiratory disease. While ICE has suspended social visits to detention centers and begun screening newly arrived detainees for symptoms, little else has changed in response to the virus inside the detention centers. Some detention centers even have up to 110 men sleeping in the same room, not enough soap to wash their hands frequently, little to no cleaning supplies, hand sanitizer for guards only, and a long waitlist to be seen by a medical professional. Health experts around the world have warned about the need for social distance, a condition that is nearly impossible to attain in these detention centers, making an already dangerous public health situation considerably worse.

Unfortunately, poor hygiene measures and overcrowding have always been characteristics of the ICE detention centers. In fact, an article written by the Guardian in July 2019 reported that cells with a maximum capacity of 41 persons were holding 88 people! In general, these unsanitary practices lead to the rapid spread of viruses. In an interview with the Boston Globe, Elizabeth Weinbloom, the Massachusetts spokesperson for Jewish advocacy group Never Again Action, reminded readers that the famed Holocaust victim Anne Frank died in a Nazi concentration camp from typhus, a communicable disease contracted due to the terrible conditions of the camp. Weinbloom warned Americans that an infectious disease like COVID-19 could have the same potential for killing migrants trapped in overcrowded detention camps. Indeed, ICE is already beginning to see an uptick of coronavirus cases in its detention centers with clear signs the pandemic is taking hold at ICE facilities. On March 24, the agency announced that a 31-year old Mexican man held in the Bergen County jail was the first ICE detainee in the country to test positive for COVID-19. Two days later, New Jersey officials announced a second case, saying a 52-year-old immigrant held by ICE in Newark also tested positive. As of today, there are 72 confirmed cases of COVID-19 among detainees, 19 cases among staff members at facilities used by ICE to hold immigrants in New Jersey, Texas, and Colorado, and 72 cases among ICE employees who aren’t assigned to a detention facility. The agency now has a running tally on its website to track similar cases in its facilities. However, these numbers are likely inaccurate, as the invisible masses held in detention centers have even less access to testing than the average American.

In an even more alarming move, USCIS officials have also indicated that they are unwilling to bargain with their own employees over workplace conditions. During a national emergency, USCIS has the power to mandate policy changes without negotiating with the union. Normally, the union is in turn entitled to demand “post-implementation bargaining” to mitigate negative impacts on employees. In a bid to bargain with USCIS, the American Federation of Government Employees Council 119, which represents around 13,000 USCIS employees, submitted a proposal to USCIS requiring the agency to post signs encouraging good hygiene, provide workers with sick leave and timely COVID-19 testing for all employees, access to hand sanitizer and wipes, and canceling all unnecessary travel. On March 25th, USCIS officials informed the agency’s union that management does not want to bargain over workplace policy changes. The fact that the USCIS was refusing to meet these very basic demands increases the likelihood of a nightmare unfolding not only in the detention centers but also in the community at large, as ICE workers leave their workplace at the end of the day. In an effort to respond to the COVID-19 crisis, ICE then demanded 45,000 N-95 masks for its staff and personnel, a request it promptly rescinded after many lawmakers on Capitol Hill criticized the move. However, it remains concerning that, in a time where hospitals around the country are facing a severe shortage of masks and nurses, doctors, EMTs are being asked to put their lives at risk to save people, ICE would rather divert precious resources towards their campaign to terrorize immigrants.

Additionally, clashes between detainees and guards at ICE detention facilities across the country have begun to escalate. In Louisiana and Texas, guards shot pepper spray at the detainees, which ended with nine of the migrants being held for disciplinary charges. In Pennsylvania, more than 150 detained immigrants have started a hunger strike to demand their release amid the coronavirus pandemic. In New Jersey, others are on a hunger strike to try to obtain soap and toilet paper. After facing significant pressure from prisoners, activist groups, and lawyers, ICE announced on April 15 that it would release almost 700 immigrants who had been identified as vulnerable to the virus, a move that ICE Director Thomas Homan had previously said would “endanger public safety.” This kind of rhetoric is very indicative of the ways that ICE and the Trump administration views immigrants in general. To them, the immigrants are only to be used as cheap labor, pitted against their domestic counterparts, and then criminalized, hunted, left for dead in overcrowded cells, or deported back to their home country.

In fact, on April 14, Guatemala, El-Salvador, and Honduras all asked the Trump administration to administer a moratorium on deportations as the U.S. becomes the global epicenter of the virus. But instead of halting deportations, President Trump signed legislation that would authorize sanctions against countries who refuse to accept deportees, despite concerns about the ability of their health systems to handle severe outbreaks. Indeed, the Trump administration’s attitude is indicative of a very dark reality that underpins the racist capitalist structures that shape the American police state and its empire at large, one in which the lives of the working class do not matter. For this reason, it will also be essential that we work to ensure that the working class is not routinely bearing the brunt of each crisis.

On a slightly more positive note, the Trump administration’s blatantly racist discourse has also triggered a wave of leftist activism. When media outlets circulated images of children in cages, the “Abolish ICE” movement was born, and many career politicians joined it’s rallying cry. Yet while abolishing ICE would certainly support migrant workers and provide them with momentary relief, the American immigration system as a whole criminalizes working class immigrants who have few, if any, legitimate avenues for immigration. If we are to have any hope of eliminating the inhumane conditions at the American borders, we must demand open borders for all. Furthermore, it is not going to be enough to simply abolish one arm of the capitalist state’s repressive forces. Indeed the movement for migrant rights must be grounded in a rejection of all forms of state repression in the United States, including the terrorizing of Black communities at the hands of the police. In an article written for the Worker’s World, Teresa Gutierrez rightly called for Black and Brown unity in alliance with everyone against the racist state in a unifying demand for the end of the “polICE.” Capitalist exploitation is built on the division of the working class, and the reality remains that politicians on both sides of the political aisle will always try to divide us along racialized lines. It is time for Brown and Black communities to unite in the face of the capitalist repressive regime and bring an end to the violence that our communities face.