After yesterday’s immigration raids in Mississippi, it is more important than ever that working people mobilize to release the detained immigrants, shut down the concentration camps and open the borders. 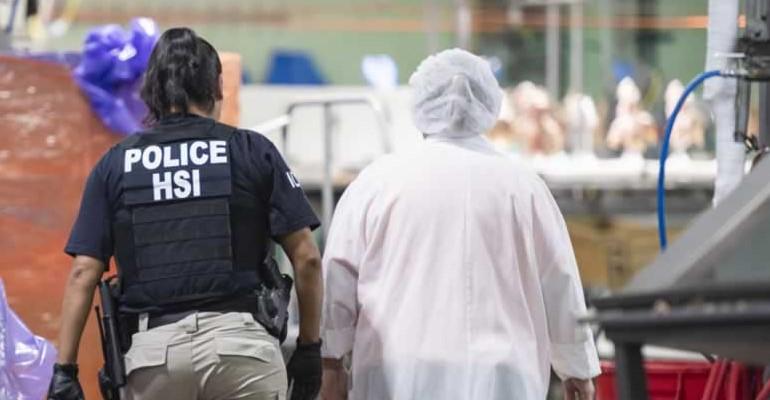 In what is being described as the biggest single-state immigration raid in U.S. history, 680 immigrant workers were arrested by DHS agents at four different meat-processing plants across Mississippi on Wednesday afternoon. Witnesses say hundreds of their fellow workers were zip tied and loaded onto buses, where many were then taken to the local national guard base for processing. These immigrants were detained and taken away, leaving their children behind without so much as a notice. As a result, several children returned from school to find their homes locked and their family members gone. WJTV, Mississippi reports that children roamed the streets crying, and were taken by neighbors to a nearby gym where some spent the night and others waited for friends to take them in.

In the meantime, Trump traveled to El Paso, Texas where just days ago, a lone white-nationalist gunman targeted Hispanics at a local Walmart, killing 22 people. Thanks to massive public outcry, Trump is being forced to acknowledge the racial hatred that sparked this shooting. But his actions tell another story that Trump is not even trying to cover up. Both in policy and in rhetoric, Trump supports the notion that there is a “Hispanic invasion” in the United States: a national emergency that should be stopped by a border wall, by family separation, by ICE raids and by terror.

The coordinated nature of the raids, the vast number of immigrants arrested, the use of force employed by the DHS (reports suggest more than 600 agents were involved) and the incredible state and national resources used amount to what can only be described as a state-sanctioned terror campaign meant to frighten and intimidate the millions of undocumented workers currently living in the U.S. While Trump was forced to say a few words against racism, his actions are an attempt to embolden and fuel white nationalism. In this sense, the El Paso shooter is an extension of Trump’s policies and rhetoric, policies and rhetoric that he has decided to double down on. Because of this, these raids will only embolden more violence and open hatred and discrimination against immigrants, Latinx people, people of color, and LGBTQ people.

Over the past few months, millions of people have awakened to the reality that the United States is running concentration camps—some have even realized that these camps were funded, supported and set up by both the Democratic and Republican parties. At these camps, children are separated from their parents and people are kept in vastly overcrowded and over-heated rooms. Sexual assault is prevalent and several immigrants have died there.

Knowing there are concentration camps is not enough. We need to fight to end them. We need a national mobilization to go to the camps, demanding the immediate release of all prisoners and the closing of all the concentration camps. Following the example of Wayfair workers, we need to push our unions to go on strike and organize actions until all the camps are closed.

But, we know that these camps and these state-terror round-ups are a result of the “strong borders” that all Republicans and all Democrats, including Bernie Sanders, support. The only real solution to the state terror of detention centers and raids is the abolition of ICE and all bodies meant to repress immigrants. It is to open the borders and allow the free passage of all people.

Release all the detained.

Abolish ICE and all bodies to repress immigrants.

In New York City this weekend, there is an action at 11 am in Madison Square Park: #DignityNotDetention: Close the Camps!

If you would like us to add information about an action in another city, please send us a facebook message with a link.  We will include it in this article.