According to a whistleblower report, an ICE detention center is performing hysterectomies on women without their consent or awareness. This is consistent with a long history of forced sterilization of women of color in the United States. 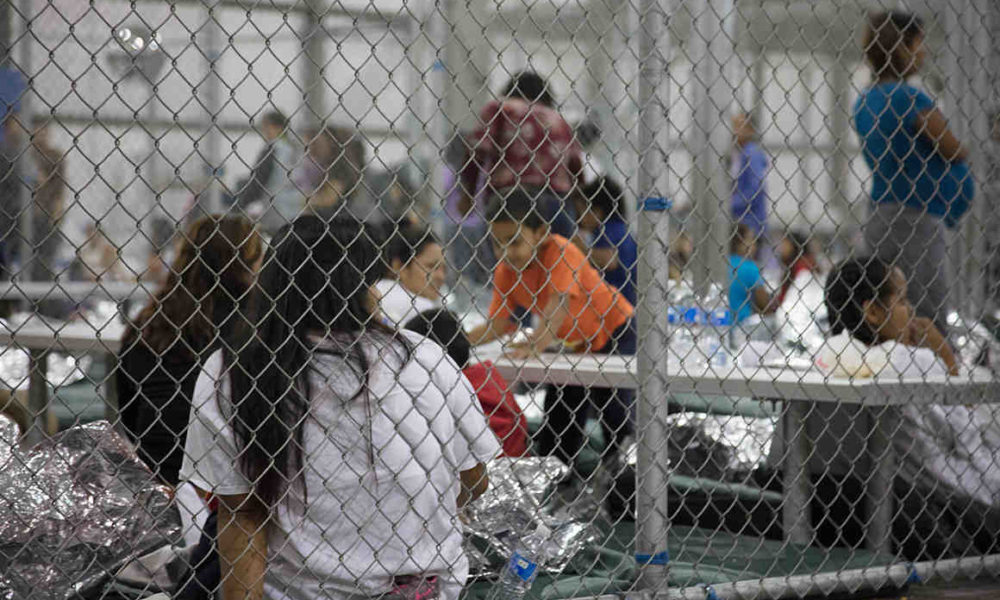 “When I met all these women who had had surgeries, I thought this was like an experimental concentration camp. It was like they’re experimenting with our bodies”.

“Everybody [the off-site doctor] sees has a hysterectomy – just about everybody…That’s his specialty, he’s the uterus collector. Everybody’s uterus cannot be that bad.”

“[A detainee] was originally told by the doctor that she had an ovarian cyst and was going to have a small twenty-minute procedure done drilling three small holes in her stomach to drain the cyst. The officer who was transporting her to the hospital told her that she was receiving a hysterectomy to have her womb removed. When the hospital refused to operate on her because her COVID-19 test came back positive for antibodies, she was transferred back to ICDC where the ICDC nurse said that the procedure she was going to have done entailed dilating her vagina and scraping tissue off.”

Yet another detainee spoke about not being properly anesthetized during the procedure, and heard the doctor tell the nurse he had mistakenly removed the wrong ovary, resulting in her losing all reproductive ability.

These are the horrific reports and testimonies from detainees and workers at Immigration and Customs Enforcement (ICE) concentration camps according to whistleblower Dawn Wooten, a nurse at Irwin County Detention, an ICE facility in the state of Georgia, about the illegal, unethical, and violent procedures being performed on detainees without their consent. These are sexual assaults perpetrated by the state.

Wooten filed a complaint revealing the atrocities taking place in the detention center she works at, which is run by the private corporation La Salle Corrections. “I’ve had several inmates tell me that they’ve been to see the doctor and they’ve had hysterectomies and they don’t know why they went or why they’re going,” Wooten said in the report. The whistleblower complaint was filed by several advocacy groups who bolstered Wooten’s claims with the testimonies of immigrants and another nurse who wished to remain anonymous.

LaSalle released the following statement in response to the countless reports of abuses: “LaSalle Corrections is firmly committed to the health and welfare of those in our care. We are deeply committed to delivering high-quality, culturally responsive services in safe and humane environments.” LaSalle runs eighteen detention centers in the South which can hold over 13,000 people.

The people in these ICE detention centers are incarcerated while they await a determination of their immigration status or potential deportation. Detention of immigrants has skyrocketed in the past few decades under both Republican and Democratic administrations, with the average daily population of detained immigrants going from 5,000 in 1994, to 19,000 in 2001, and to over 39,000 in 2017. Clearly, the policy of increasing detentions is bipartisan. ICE runs the detention system, but subcontracts the majority of detention to private prison companies who make profits from contracts with the government by filling the beds with undocumented immigrants.

Dawn Wooten’s complaints do not only address the hysterectomies and deeply neglectful gynecological care occurring in the ICE detention center. She also speaks about the inhumane response to the coronavirus and gross disregard for the immigrants detained there. Social distancing is impossible in a crowded detention center. While ICE claims that 31 people at the Irwin facility have tested positive for the virus, Wooten believes that number is a lie: at least 50 people have tested positive.

In fact, immigrants at Irwin have been protesting since the start of the pandemic. In April, a video surfaced of detained women speaking out in protest at the Irwin facility. They crowded around the camera holding signs that read, “Help us please” and spoke about chilling conditions in the detention center, including overcrowding and lack of sanitation. The protesting migrants were retaliated against with solitary confinement, leaving family members and lawyers frantic. At the men’s section of the Irwin facility, there were hunger strikes and protests throughout the summer, highlighting the overcrowding and increasingly dangerous conditions.

But it’s not just Irwin facilities: around the country, there are reports of cruel and inhumane conditions in detention centers. People are denied all kinds of reproductive care in the detention centers. ICE has denied treatment to detained women with cancer, brain tumors, and breast cysts. A detention center is even tracking migrant girls’ periods to prevent them from getting abortions. Just last year, 4,500 immigrant children filed a complaint saying they were sexually abused while in ICE custody, including many who were assaulted by ICE and/or by guards and other personnel in a detention center.

A Long History of Sterilizing Women of Color

The gynecological abuses in ICE detention centers are in line with a long history of sterilization of women of color by the U.S. Government — particularly Black, Latina, and indigenous women. This includes the early 20th century eugenicists who promoted the sterilization of poor Black women as a way to “cure” the population of poverty. Margaret Sanger, the founder of Planned Parenthood, was among those who supported racist eugenics. Alex Stern wrote in Eugenic Nation: Faults and Frontiers of Better Breeding in America, “In the early 20th century across the country, medical superintendents, legislators, and social reformers affiliated with an emerging eugenics movement joined forces to put sterilization laws on the books. Such legislation was motivated by crude theories of human heredity that posited the wholesale inheritance of traits associated with a panoply of feared conditions such as criminality, feeblemindedness, and sexual deviance. Many sterilization advocates viewed reproductive surgery as a necessary public health intervention that would protect society from deleterious genes and the social and economic costs of managing ‘degenerate stock’.” As early as 1907, some states had instituted public policy that gave the government the right “to sterilize unwilling and unwitting people.” This included people who were seen as “insane,” “feeble-minded,” “dependent,” and “diseased.”

But this was not the work of rogue scientists. Sterilizations were government policy and were used against Black, Latina and indigenous people, as well as working-class white women and disabled women. These sterilizations were coerced in several ways. There were those who didn’t have the procedure explained to them — they simply woke up to find out they were sterilized. There are those who were threatened with welfare being cut off if they did not undergo the procedure. Some women were never told anything at all. This became so widespread in Mississippi among women of color that it was known as a ”Mississippi appendectomy.” These actions were not limited to the  early 20th century. In the 70s under the Nixon administration, Medicaid funds were put towards the Family Planning Services and Population Research Act which offered sterilizations to low-income women, especially women of color.

For example, in North Carolina, 7,600 people were sterilized between 1929 and 1974. Over half of these individuals were Black, although Black people make up only a fourth of the population. Elaine Riddick, a victim of forced sterilization in North Carolina, described the process: “Got to the hospital and they put me in a room and that’s all I remember…When I woke up, I woke up with bandages on my stomach.” She didn’t find out she was sterilized until after the procedure. One can imagine the women in ICE detention centers describing the exact same thing.

A third of women in Puerto Rico were sterilized from 1930 to 1970 due to the initiatives of the U.S. government who claimed that there were just too many poor people on the island and not enough jobs. Puerto Rico’s poverty, however, is a direct result of its exploitation as a U.S. colony. Thousands of men were sterilized as well, with many unaware that the procedure would be carried out. Women were also experimented on in unsafe human trials for birth control, resulting in three deaths.

Indigenous women have also been subjected to forced sterilizations, especially under Nixon’s policies in the 1970s. While there aren’t definitive numbers, it is estimated that between 25 to 50 percent of Native women were sterilized. Among the most brutal stories are of two fifteen-year-old girls who went into the hospital for tonsillectomies and came out with tubal ligations. The youngest reported sterilization was of an 11 year old indigenous girl.

Forced or coerced sterilizations are not a thing of the past. Not only are they being performed in ICE detention centers, but they are also performed in prisons. California prisons authorized sterilizations of nearly 150 female inmates between 2006 and 2010. The Center for Investigative Reporting exposed that the state paid doctors $147,460 to perform tubal ligations that former inmates say were done under coercion.

The State is Responsible

It is hard to fathom the invasive violation that forced sterilization represents. It is institutional sexual assault not by an individual, but by the state. And not just any state: a capitalist state built on racism and caging people of color, and which is spending millions of dollars to build private prisons to detain families who are coming to the U.S. to work, fleeing the brutal conditions created by U.S. imperialism.

This is a state that sexually assaults Black, Brown, Indigenous, and poor women as part of the project of criminalizing the poor and blaming women of color for poverty. Poverty is not a result of the reproductive choices of women of color; rather, it exists because it is immensely profitable for capitalists to hyper-exploit those at the bottom, and because the state refuses to provide services for poor and working-class people.

Sterilizations are the consequences of the government blaming women of color and poor women for poverty, rather than the capitalist state. It is part of the state policy of criminalizing the poor migrants from semi-colonial countries by putting them in cages for immigration that U.S. imperialism causes. It is part of a policy of blaming women for poverty because it’s more expedient and cheaper for the U.S. capitalist state to sterilize women of color than it is to take care of their reproductive needs. It’s a brutal, racist, and inhumane logic, a logic that says that women of color having babies is the root cause of their material conditions, not U.S. imperialism, and not a state that refuses to provide services unless it can turn a profit.

These sterilizations have been maintained and upheld by both parties. And today’s abusive system of private ICE detention centers, which make huge profits from government contracts, have been expanded by both political parties. For those detained, deported and brutalized under Clinton, Bush, Obama and Trump, there is no “lesser evil” between the Democrats and Republicans: they all built and support the same system of concentration camps.

In the midst of a brutal pandemic that has already killed almost 200,000 people in the US, all detained migrants should be set free, and the concentration camps must be shut down. All people, whether documented or undocumented, should have free access to healthcare, including to reproductive healthcare. It is clear that reparations should be paid to all of those people brutalized by the detention centers — reparations paid for by the private corporations that run the detention centers and their millionaire CEOs.