Under the new policy, some international students will be forced to leave the United States under threat of deportation, while others will be forced to return or else forfeit their visa status for the future. And it all boils down to whether or not their universities are online this fall. 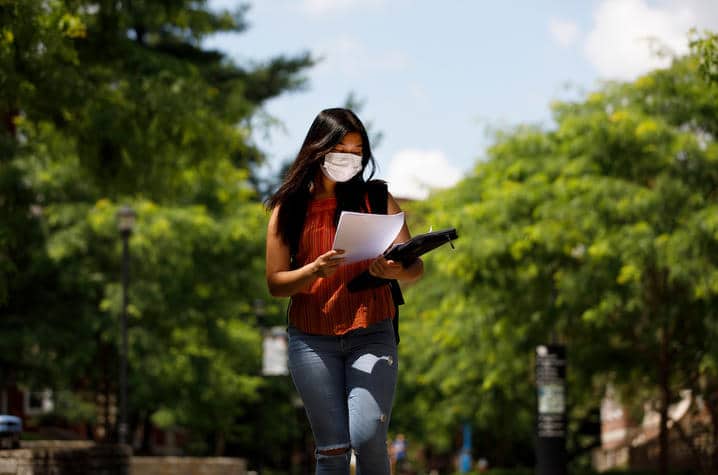 When universities began moving online in March, the federal government granted an exception to the rules governing visa eligibility and online classes for international students. Normally, students on an F-1 or M-1 visa are allowed to take a maximum of one online class per semester. This past spring, all students were allowed to finish their classes online without penalty. However, on July 6, ICE announced new Fall 2020 “guidance” for students living in the United States on F-1 and M-1 visas.

Under the new rules, international students whose universities are all-online for the fall must transfer to a different school or leave the United States. Any student who does not leave under these conditions can be detained and deported. If their university is using a blended model or holding all classes in-person, they must register for at least one in-person or hybrid class. Students currently outside of the United States must return to the U.S. for the fall semester unless their school is all-online. Otherwise, they will lose their visa status.

ICE’s decision leaves no good options. If universities hold all of their classes online, international students currently in the U.S. will be forced to leave. If universities hold some classes in person, international students currently outside of the U.S. will be forced to return— to the country with the most confirmed Covid-19 cases in the entire world. In either case, air travel poses an added financial burden to students and puts them at increased risk of coronavirus exposure.

For international students with on-campus employment (the only kind students on these visas are allowed to have), it’s unclear if they will be allowed to continue working remotely from outside the U.S. Additionally, many students may not be physically able to make the trip; many countries have banned or severely restricted travel to or from the United States. Furthermore, even if a university begins the semester with in-person classes, students will have to leave mid-semester if their school moves online at a later date.

ICE is using the pandemic as an excuse to further discriminate against international students and their families, while also using these same students as a bargaining chip to pressure schools into reopening— part of the Trump administration’s stated agenda. As cases continue to rise and Election Day grows nearer, Trump is increasingly desperate to minimize the seriousness of the pandemic and his administration’s mismanagement of the crisis. If schools can’t reopen and parents can’t go back to work — if they even still have jobs — then Trump will have difficulty claiming he successfully led the U.S. through the crisis before November. The ICE decision punishes schools that are taking the pandemic seriously, and pitting the interests of international students and domestic students against each other energizes his xenophobic base.

At the same time, ICE is launching a so-called “Citizens Academy” that will include training for civilians on how to use firearms and arrest undocumented immigrants. Such a training encourages vigilantism and increased violence against both actual undocumented immigrants and anyone that participants think might be undocumented. Such a program can only end in racial profiling and extrajudicial violence supported by the state, and any international students trapped in the U.S. after having their visas stripped away will be vulnerable.

Harvard and MIT have filed a lawsuit against ICE over the new policy, and dozens of other universities are filing amicus briefs in support of their case. Schools are scrambling to understand the nuances of the policies, particularly around what counts as a “hybrid” course, but they are wary of asking ICE for too many clarifications for fear of triggering additional restrictions.

For now, international students are trapped in a terrible limbo. Many universities have yet to announce their plans for the fall, and both the plan (when it appears) and the ICE guidelines themselves may change between now and the beginning of the semester anyway. Under these circumstances, when do you decide to book a plane ticket? Staff in the campus offices of international students are of limited use when they’re stuck waiting for the answers too.

This new ICE policy is only part of Trump’s broader strategy of racism and xenophobia — one that he has pursued throughout his presidency, but specifically during the pandemic. He has consistently referred to Covid-19 as the “China Virus” (among other, more racist names), originally restricted travel from China but not European countries like Italy and Spain, threatened to withhold federal coronavirus aid to areas with sanctuary cities, and has cut funding to the WHO because they criticized his handling of the crisis. As Election Day nears, Trump will do anything to pander to the false notion of American exceptionalism, which always means vilifying immigrants and people who live in other countries. ICE must be abolished, and this July 6 policy must be overturned, but ICE is also only one arm of the broader system that maintains U.S. racial and imperialist oppression.