We can have free, public healthcare and we won’t let CNN or the Democrats tell us that it’s a pipe dream. Part of the fight for healthcare is the fight to end all funding for the US imperialist machine that causes immeasurable misery and suffering in the Middle East and around the world. 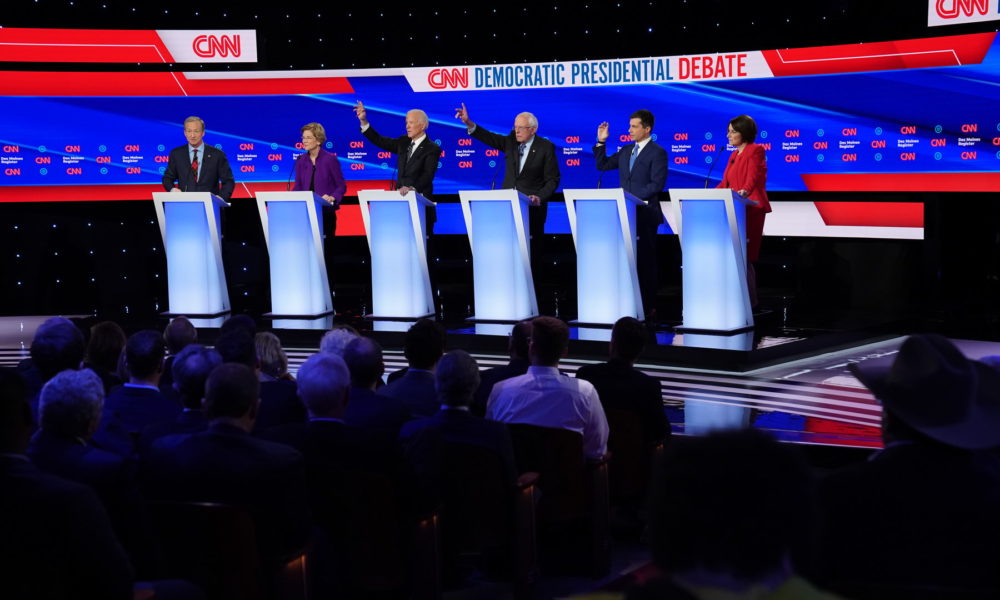 In the Democratic Party primary debate foreign policy was finally put front and center. In previous debates, it was a side note, appearing at the end or not at all. On Tuesday night, the first thirty minutes were spent on foreign policy, where the crux of the discussion focused on how each Democratic Party candidate would be a “strong commander in chief.” Central to this was the question of whether the United States should keep troops in the Middle East. The candidates responded in varying degrees, saying that they would either take out combat troops, or keep some on the ground. But most of the killing in the Middle East has been carried out by Special Forces and by drones and no one talked about ending that aspect of war.

CNN did not ask any of the candidates how they would pay for these military plans, nor did the candidates mention a plan in their responses. The debate over having troops on the ground focused solely on “the interests of the United States” — one that is not to be constrained or questioned by a pesky budget (much less the interests of folks living in the Middle East).

Shortly following the discussion of foreign policy, the debate turned to Medicare for All. This debate has become quite familiar as it has been at the center of nearly all the primary debates. Most candidates claim that Sanders and Warren can’t pay for Medicare for All, while declaring at the same time that they can get the “same results” with Medicare for All who want it — as if some people really love their co-pays. But it wasn’t just the candidates attacking Medicare for All. CNN moderators tipped the scale, targeting Bernie Sanders and asking him leading questions — as they did the whole night. The moderator asked, “Sen. Sanders, your campaign proposals would double federal spending over the next decade, an unprecedented level of spending not seen since World War II. How would you keep your plans from bankrupting the country?”

Minutes before, it seemed as though the US had an unlimited budget and the decision to keep troops in the Middle East had no price tag. For plans like Medicare for All, however, the United States has a tight budget and the proposals were just too expensive.

The hypocrisy is clear. Just a few weeks ago, with the help of House Democrats, Donald Trump approved a $1.43 trillion spending package, including 738 billion dollar dollars on defense. Not only did Trump increase military spending, but he also created a space force and is continuing to fund a border wall.

The US invests three times as much in defense as the second largest military spender, China, and ten times as much as Russia, the third biggest spender. Yet, year after year, Trump continues to grow the massive war machine. There is always money for imperialism (not to mention massive tax breaks for large corporations like Amazon). There just isn’t money for working class people to access healthcare (or housing and education, for that matter).

While many candidates spoke out against “endless wars,” not one candidate mentioned the destruction that the US military has wreaked on the Middle East, both in terms of bombs dropped on civilians and sanctions that wage economic war on working class people abroad. Nor did any of them propose defunding the military to fund healthcare.

The primary opposition to endless wars is procedural, stemming from Congress’ lack of approval.  As Pete Buttigieg argued, “Fundamental truth is, if our troops can summon the courage to go overseas into harm’s way, often on deployment after deployment, then we’ve got to make sure that Congress has the courage to take tough up-or-down votes on whether they ought to be there.” Others spoke about withdrawing troops, while protecting “US interests”— the interests of American capital. Warren for example, argues that when having troops on the ground is no longer viable, economically or otherwise, for the US, instead they target the working class of countries like Iran through sanctions, or as Warren calls them, “our economic tools.”

Bernie Sanders did point out the high cost of wars, stating  “In America today, our infrastructure is crumbling. Half of our people are living paycheck to paycheck. Eighty-seven million people have no health care or are uninsured or underinsured. We got 500,000 people sleeping out on the streets tonight. The American people are sick and tired of endless wars which have cost us trillions of dollars.” Yet, the rest of Sanders’ answer was an echo of Obama’s imperialist business as usual, calling on the US to rebuild the State Department and rely on United Nations, known to sexually assault and repress workers.

While lack of budget appeared to be the central focus for many in the debate over Medicare for All, none of the candidates demanded to cut the imperialist war budget, much less eliminate it entirely. Unsurprisingly, all of the candidates who served in Congress have voted for several defense budgets during their tenure in office.

Notable war hawk, Joe Biden, has voted for and supported military budget after military budget, along with countless US interventions. He was also a proponent and executor of the drone strike approach to foreign policy executed by President Obama. While Biden received the most attention for supporting the war in Iraq, imperialist tendencies among the Democrats don’t end with him.

Despite attempts to paint herself as more left on this issue, Elizabeth Warren not only voted for Obama’s military spending, but also voted for Trump’s 2017 bill that authorized $700 billion in defense funds. This included $640 billion for the Pentagon and an additional $60 billion for military operations in countries such as Syria, Iraq, and Afghanistan. The bill increased military spending by $80 billion. Although Bernie Sanders voted against Trump’s military budgets, he voted in favor of Bush’s and Obama’s war budget and appropriations to the military over several years( 2002, 2004, 2005, 2006, 2007, 2008,  2009, 2010, and 2013).

Wars and a Lack of Healthcare: The Same Root Cause

So, why do they have money for wars but can’t feed the poor, as Tupac would say? Is it merely a matter of politicians with the political will to change the national priorities? Have our priorities just gone astray?

Continued imperialist wars and intervention in other countries come from the same root cause as denying healthcare. Both happen because they are immensely profitable for the capitalist class — a fact that all failed to mention during the debate. And it’s no wonder. Both the Democrat and Republican Parties, as well as news outlets like CNN, MSNBC, Fox News and the like are staunchly on the side of American capitalists — in this case the American defense contractors whose stocks rose due to escalating tensions in Iran, or the health insurance companies who make million dollar profits while working class people go into debt, lose their homes or even die due to lack of coverage.

Capitalists use these debates to convince swaths of working class people that Medicare for All is a “radical” demand that may bankrupt the country when it is, in fact, a comparatively modest demand. What the Democrats fail to note in the debate over Medicare for All is that it won’t end all private healthcare. Hospitals, for example, will still make massive profits. Nor do they problematize who actually runs the healthcare system: CEOs instead of nurses, doctors, and patients who are in hospitals day in and day out.

Medicare for All is a step towards a public healthcare system similar to what capitalist countries all over the world have — not only in Europe, but also in countries like Brazil and Argentina whose GDPs are much lower. We deserve Medicare for All, and much more.

It’s not true that the United States can’t pay for it and people are starting to notice the hypocrisy. Shortly after the debate and throughout the next day, the hashtag #CNNisTrash was trending on Twitter. The hate directed at CNN is reasonable when considering the questions explicitly attacking Medicare for All or the lack of questions about the pricetag for war,the earthquake in Puerto Rico, immigration, and so much more. This is not a coincidence, or a problem of a few bad moderators. CNN is a multi billion dollar business owned by AT&T‘s WarnerMedia. Why would a business with its tentacles in news and telecommunications want to question US imperialism, if that very imperialism is the mechanism to open markets for their products? Why would Randall Stephenson, CEO of AT&T, whose net worth is $140 million want to pay higher taxes to pay for Medicare for All?

CNN will never host a fair debate, let alone one on the side of working class people. Rather, they try to convince us that even moderate demands are far too radical and unaffordable for the richest country in the world.

But increasingly, folks see through their bullshit.

Despite what CNN says there is money not only for Medicare for All, but also for free, public healthcare. Part of getting it is and should be closing US bases around the world and stopping all funding to the imperialist machine. The massive health insurance companies that profit from misery are our enemies, not the working class people in Iran protesting against US sanctions and their own dictatorial regime. We can have free, public healthcare and we won’t let CNN or the Democrats tell us that it’s a pipe dream.