The progressive Democrat, Ilhan Omar, has referred to the former prime minister of the UK as a hero. This is liberal feminism in a nutshell. 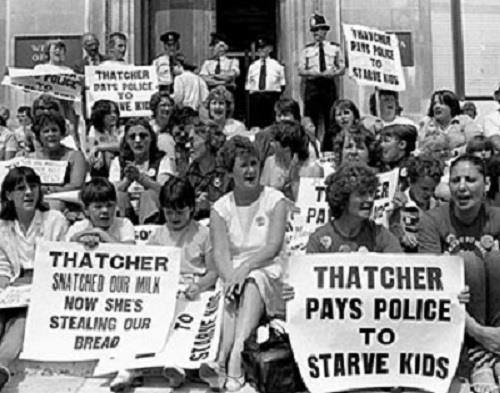 Ilhan Omar, a U.S. Representative from Minnesota, is one of the most progressive members of Congress. With her denunciations of U.S. imperialism in the Middle East and Latin America, she is often considered the most radical member of “The Squad” of four progressive congresswomen.

But in a recent interview with NPR, the Democrat surprised listeners by expressing her admiration for Margartet Thatcher, who was prime minister of the United Kingdom from 1979 to 1990. Omar said:

It’s interesting, right? Oftentimes, we’re told who our heroes can be. And for me, I find it to be inspirational for a woman, when there were really no other women around who were leading, to say, “I can do this.” And I think as I think about my own journey, dealing with the ideas that many within my own community had about, “a boy should be the first.” I needed to have sort of an inspiration, and obviously, she’s left a very dark mark in history. But we can’t take away how inspirationally bold she was to believe that she can lead as a woman in her time.

Yes, Thatcher was a trailblazer. But not because of her gender.

Alongside Ronald Reagan in the United States, Thatcher led a worldwide offensive against the working class. Her program of social cuts, privatizations, and lowering taxes for the rich is commonly known as neoliberalism. With her year-long fight against the National Union of Mineworkers, she was able to break the backbone of the workers’ movement in Britain.

Working-class people in the UK still refer to her as “Milk Snatcher” for her attempts to remove free milk from schools.

Thatcher was also a warmonger. Her war against Argentina in 1982 served to reestablish imperialist hegemony around the world. Thatcher intensified Britain’s dirty war in Northern Ireland. In 1981, Irish political prisoners started a hunger strike demanding political status, and Thatcher stood by while ten of them withered away. Bobby Sands was elected a member of parliament while on hunger strike, shortly before his death.

The comedian Eric André had a better take in an interview with Mel B from the Spice Girls:

Do you think Margaret Thatcher had girl power? Do you think she effectively utilized girl power by funneling money into illegal paramilitary death squads in Northern Ireland?

Starting in 1968, working-class and oppressed people around the world carried out revolutionary struggles against the capitalists in the West and the bureaucrats running the degenerated workers’ states in the East. Thatcher was one of the main leaders of the bourgeoisie’s counter-offensive.

Her legacy is one of greater misery for working people around the world, and especially women. Thatcher’s cuts to the National Health System are still felt today, as thousands are dying of the Covid-19 pandemic in Great Britain and hospitals are overwhelmed. It is no surprise that workers celebrated her death.

So what, exactly, does Ihan Omar find inspirational? This is liberal feminism in a nutshell: If capitalism means that just eight people own more wealth than half of humanity, then liberals want half of those eight people to be women. Liberals are fine with supporting a system based on exploitation and oppression as long as a few representatives of the oppressed are allowed into the pinnacles of power.

That is why it is no surprise that Omar has come out in support of Joe Biden, who is not only known as a sexual abuser but also as a zealous neoliberal politician responsible for throwing millions of working people into bankruptcy and millions of Black and Brown people into prison. “The Squad,” for all their left-wing posturing, are reliable members of the Democratic Party, one of the oldest capitalist parties in the world. Real socialists fight for working-class people to organize independently of the ruling class.