Ilhan Omar: It’s Not Just About the Benjamins

The Israeli Lobby spends millions to influence U.S. politicians, but the United States’ uncritical support for the state of Israel is not just about AIPAC, it’s about imperialism. 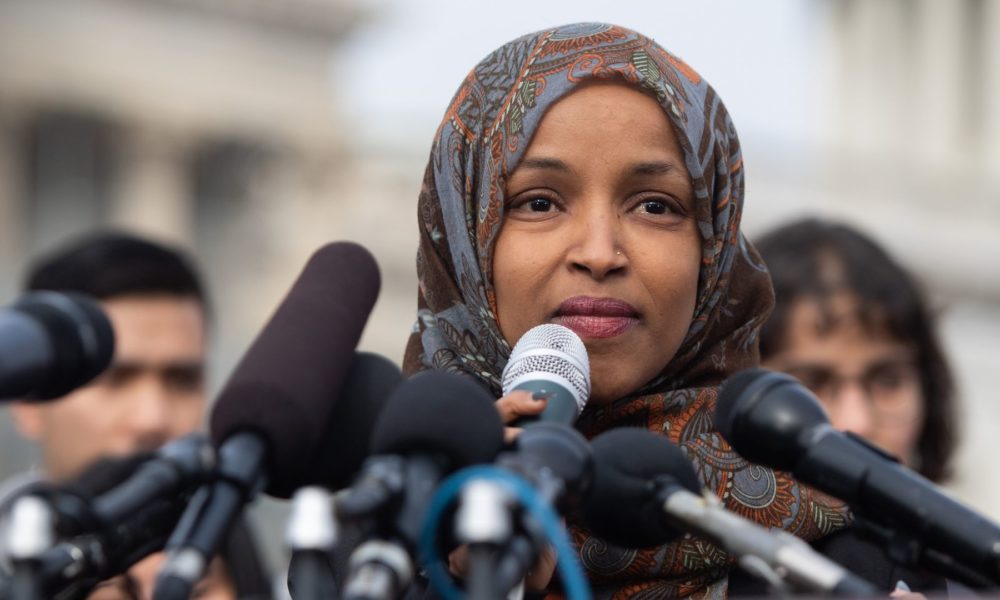 On February 10, freshman congressperson Ilhan Omar wrote a brief tweet in response to journalist Glenn Greenwald, saying that Republican support for Israel was “all about the Benjamins,” implying that pro-Israel lobbyists were using money to unduly influence U.S. politics in favor of Israel. When later asked to clarify who she thought was behind such efforts she said simply “AIPAC!” the acronym for the American Israel Political Affairs Committee, which spends millions of dollars every year influencing congress and shaping public perception of Israel in the U.S. These tweets were met with a barrage of criticisms and scurrilous claims, by Republicans and Democrats alike, that her comments were antisemitic.

It is no coincidence, of course, that the first hijab-wearing congressperson—and an outspoken advocate for Palestine—has become the target of accusations of antisemitism. To state the obvious, Omar’s tweets are not antisemitic. Instead these accusations are being hypocritically put forward by some of the worst antisemites—people like Donald Trump—to discredit critics of the right-wing government in Israel. And such accusations only detract from the rise of actual antisemitic hate speech and violence (such as the Pittsburgh Synagogue shooting) that has followed Trump’s election.

While the house GOP Leader Kevin McCarthy already condemned Omar and other “progressive” Democrats for their criticisms of Israel and support for the Boycott, Divestment and Sanctions (BDS) movement, some of the strongest rebukes actually came from within Omar’s own party. Without missing a beat the entirety of the Democratic Party Congressional Leadership penned a letter claiming that Omar’s “use of antisemitic tropes and prejudicial accusations about Israel’s supporters are deeply offensive.”

Less than one day after this letter circulated, Omar walked back her criticisms about the influence of AIPAC money on congressional politics and said she was “unequivocally apologizing” for her comments. Omar added that she was still learning and was grateful for her “Jewish allies and colleagues” who had educated her “on the painful history of antisemitic tropes” and that although she was still concerned about the influence of lobbyists, including AIPAC, she was willing to “step back and think through” the criticisms that had been leveled against her.

In response, President Trump called her apology “lame,” and asked for her to resign from congress or at least give up her seat on the House Foreign Affairs Committee. Even the so-called progressive members of Omar’s party, such as Alexandria Ocasio-Cortez, were careful to avoid any criticism of Israel or AIPAC when weighing in on the controversy. Indeed, AOC’s response praised Omar for her apology, but said nothing in support of her comments or to counter the absurd accusations of antisemitism. Bernie Sanders, the progressive lion of the Senate, has so far remained silent on the issue.

While Omar’s apology pointed to the hateful tropes that have historically (and more recently) cast Jewish people as tribalistic and conspiratorial manipulators of global affairs, it is obvious that that was not the content of her tweets. Rather, her real crime, it is clear, was criticizing Israel; and her apology, like AOC’s response, unfortunately only reinforces the perception that criticisms of Israel are de facto antisemitic criticisms of Jewish people everywhere.

Yet, while defending Omar from unfounded accusations of anti-Semitism, it is worth examining her comments more deeply—comments which only tell half the story with regard to the U.S. and Israel. Although Omar is absolutely correct that Israeli lobbyists have significant influence within the U.S. political establishment, AIPAC does not really shape U.S. policy on Israel so much as it supports and promotes it. To say that it’s all about the Benjamins misses the historical dimension of the U.S.-Israel relationship.

To be clear, AIPAC and the Israeli lobby are, without a doubt, powerful organizations that have a significant influence on American politics both through the direction of campaign funds and by disciplining critics of Israel such as Omar. In fact, AIPAC has consistently been described as one of the top three most influential lobbies in DC, along with the American Association of Retired People (AARP) and the National Rifle Association (NRA). While AIPAC does not contribute directly to congressional campaigns they have significant influence over other Israel Lobbying groups and Political Action Committees such as J Street who do directly contribute millions of dollars each year to both Republican and Democratic congressional campaigns. In 2018 for instance, J Street alone donated almost $4 million to Democratic candidates.

But the policies proposed by AIPAC are entirely in line with the ruling class’s larger vision of global American hegemony, a vision that AIPAC has helped the state department craft and sell to the American people. Moreover, it is a vision put forward by both Democrats and Republicans alike.

This is why Israel is the top recipient of U.S. foreign aid and why it has received more than $134 billion from the U.S. since 1949. Much of this money has come in the form of Foreign Military Financing grants (FMFs), which are effectively lines of credit for foreign states to purchase arms from U.S. manufacturers. According to the Congressional Research Service, President Obama signed a 10-year Memorandum of Understanding in 2016 to provide Israel with $38 billion in military aid, and President Trump is requesting $3.3 billion in FMF grants for 2019 as part of that memorandum. Although the people at AIPAC would like you to believe that this money is necessary to defend what they frequently claim is “the only democracy in the Middle East,” the exorbitant amount of aid and military hardware that Israel receives from the United States is part of a mutual agreement that serves the interests of both states.

Indeed, Israel has always been a critical lynchpin in the U.S. imperial project, and from its founding, Israel has been used as a proxy military force for U.S. interests in the oil-rich Middle East and Africa. This was accomplished first by acting as a bulwark against the ambitions of Arab nationalism in the 1960s, ultimately driving Arab nations toward the U.S. after the 1967 Arab-Israeli war and the Camp David Accords. Later, during the Cold War, Israel played an essential role in maintaining a balance of power in the Middle East that was favorable to the United States and which hindered the expansion of the Soviet Union and Soviet interests in the region. Since the end of the Cold War, Israel has continued to operate as a check against Russian proxy interests like Iran and Syria. And still today the U.S. and Israel use their economic might in service of “maintaining stability in the region,” code for undermining the Palestinian liberation movement and anything that threatens U.S. or Israeli economic or strategic interests.

Therefore, in order to effectively oppose zionism, we must oppose more than the Israeli lobby; this is not just a question of getting money out of politics. It is a problem that goes to the core of U.S. foreign policy in the Middle East, a policy that guarantees massive profits for the arms and oil industries.

While it is refreshing to see that politicians like Omar are willing to publicly criticize Israeli policy and the influence of the Israeli lobby, the response to her tweet and her subsequent response to her critics only reveals the weakness of the new progressive democrats in shifting public policy and challenging public perceptions. In many ways, Omar’s comments have opened a Pandora’s box and all of us who oppose U.S. imperialism and the Israeli occupation of Palestine should be happy that this controversy has called so much attention to the influence that AIPAC and other Israeli lobbies have on American foreign policy. It should be noted, however, that although sunlight is a strong disinfectant, this information has been publicly available for decades and yet the influence of AIPAC has grown within the halls of the U.S. congress. Omar has called attention to it anew, but her quick apology only emboldens those who would continue to use the smear of antisemitism to provide cover for any criticism of Israel or the imperial U.S.-Israel relationship.

Omar could have used this controversy as an opportunity to point out the boundless contradictions of her critics and to offer further criticism of U.S.-Israeli relations instead of apologizing for an offense she did not commit. She could have used this moment to talk about the $3.8 billion that the U.S. gives to Israel each year, or the weapons that the U.S. manufactures for the Israeli Army. She could have explained that, contrary to the standard line of the U.S. ruling class, support for Israel actually destabilizes the region of the Middle East. A true militant in congress could have refused to allow the conflation of anti-Zionism and antisemitism; she could have doubled down and insisted that the linking of a settler-colonial, imperialist project with the Jewish faith is, in fact, its own form of antisemitism.

The quick retraction, however, is a clear demonstration of the pressures that the Democratic Party establishment will exert, hand in hand with the Republicans, to discipline their freshman progressives. This is why working people need our own leaders who do not seek the approval of the Democratic Party but welcome its hatred. The working class in the U.S.—and the Palestinians fighting to see a Free Palestine in their lifetime—needs independent international revolutionary leadership grounded in revolutionary movements and organizations. In this sense, independence from the capitalist parties is not only a question of principle, it is the groundwork on which we can build a material force against Zionism, refusing to accept the anti-semitic trope that conflates criticisms of Israel with hatred towards Jewish people.