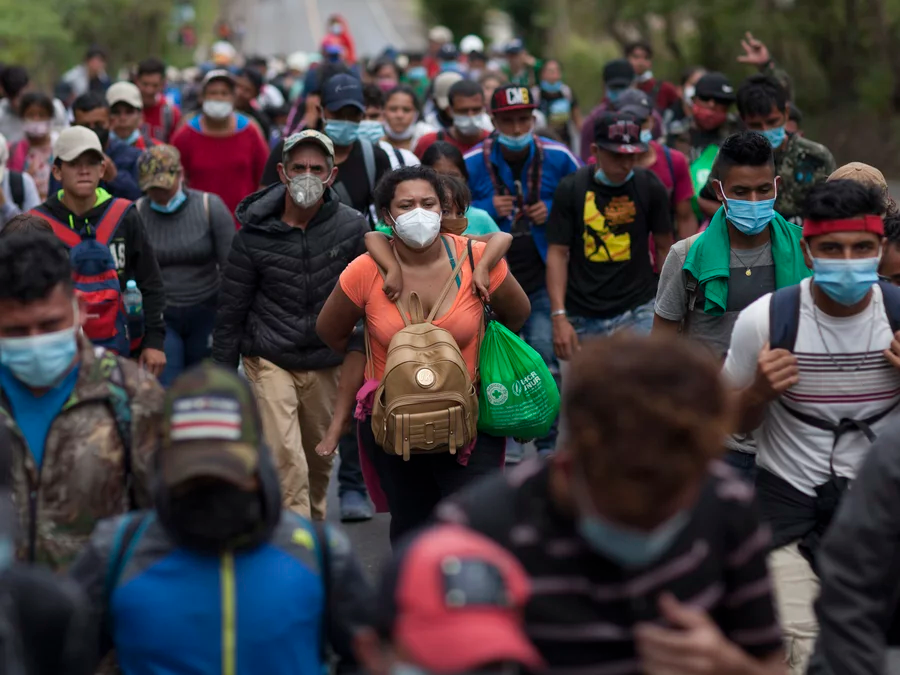 The largest mass death of migrants in recent U.S. history occurred last week, when 53 immigrants suffocated in a truck in San Antonio, Texas.

This comes only a few days after the Supreme Court overturned Roe v. Wade, barring the federal right to an abortion and ensuring that Texas’s draconian SB8 goes into effect.

It comes only a few weeks after the Supreme Court decided that immigrants can be detained indefinitely.

Not all immigrants are treated the same way, of course. The worst xenophobia is usually reserved for Black, Brown and Asian people– immigrants from the global south. Low-income immigrants and especially undocumented people will suffer most.

Because crossing the border is illegal and so difficult, millions of migrants face dangerous conditions. 60 to 80 percent of surveyed immigrant women were sexually assaulted on their trip from Central America to the United States. Many of those women are detained in the hundreds of ICE jails around the country. Violence against LGBTQ+ people is also common.

It’s no secret that these detention centers are brutal.

Now ICE has said that immigrants in detention centers are entitled to abortions and will be transported out of states where abortion is illegal to have the procedures; but because of the Hyde Amendment and other federal regulations, this only pertains to cases of rape, incest, or life endangerment. Further, policies to bar abortions in detention centers and criminalize those who try to help migrants get access to abortion care are certain to gain strength now that Roe v. Wade has been overturned.

Kristina Tocce, medical director for Planned Parenthood of the Rocky Mountains, explained, “I have seen patients that have expressed such fear, terror about traveling such long distances and about being pulled over and questioned.” She explains that many wonder, “What if I can’t answer those questions appropriately and I get in trouble?”

The truth is that travel for an abortion is not accessible and the source of terror for many. She says, “That additional fear of having an interaction with law enforcement during this journey is so hard.”

But it’s not only ICE that makes it difficult to travel for abortions. There are financial restrictions that make traveling difficult, as well as lack of childcare, lack of time off work, and more.

The financial restrictions on abortion result from a bipartisan policy codified by the Hyde Amendment. Under this amendment, federal money cannot go toward abortions except in extremely restricted circumstances. Medicaid, then, cannot be used to access abortion. This policy, supported by the likes of Joe Biden and passed by Jimmy Carter, has had bipartisan support for decades. When Carter passed it, he said,

Well, as you know, there are many things in life that are not fair, that wealthy people can afford and poor people can’t. But I don’t believe that the Federal Government should take action to try to make these opportunities exactly equal, particularly when there is a moral factor involved.

The results were fatal. In 1977, Rosie Jimenez became the first known person to die of an illegal abortion due to Hyde Amendment. She was a 27-year-old Chicana living in Texas, the daughter of immigrant farm workers and was studying to be a social education teacher. She already had a daughter she was struggling to care for. She couldn’t afford the price of an abortion, so she sought out an under the table abortion and died from the procedure.

Abortions cost money — both for the procedure, and even more if you need to travel across state lines. Many of us do not have the luxury of paid time off for an abortion, or any medical procedure. When I got an abortion, like most undocumented folks I didn’t have healthcare coverage. I didn’t know abortion funds existed, and I was running against the clock. It took me weeks of saving, but I raised enough to pay for my abortion medication at a local Planned Parenthood clinic. I was welcomed without judgment and reassured my information would not be shared with any agency, including ICE.

All too often, people who are least able to access abortion funds who most need them — whether it be due to lack of internet access or due to not speaking English, or due to fear of accepting resources.

And while some claim that abortion pills — which are still federally protected — are a “workaround” to the overturning of Roe v. Wade, that doesn’t quite work for undocumented people.

On the one hand, abortion pills are approved only for up to 10 weeks of pregnancy. Further still, Texas’s 2021 Senate Bill 4 (and others like it in many states) requires a physician to be present to administer the pills and explicitly prohibits mail or courier delivery inside Texas — as well as banning abortions after six weeks.

Fear of the Medical Establishment

Further, the medical establishment is racist and xenophobic. According to the Centers for Disease Control and Prevention, Black and indigenous women are three times as likely than white women to die from a pregnancy-related cause. Lack of access to abortion and unwanted births will literally kill Black and indigenous people.

Further, all too often there is no translation, poor translation, or insufficient translation services for those who need it. And overworked and underpaid healthcare workers often do not have the resources to support their patients.

Many undocumented people fear that their medical information will be shared with the state. For some, it is reason enough to avoid the doctor. As Lopez writes in Teen Vogue, “When I decided to get an abortion, I was terrified that my information would be given to Immigration and Customs Enforcement (ICE) and my decision would one day be used against me.”

Although immigrants, especially undocumented folks, will have trouble accessing abortions that they choose, other immigrants have been and continue to be subjected to forced sterilizations. This was true of Black, Latinx, immigrant, indigenous and disabled people on a large scale throughout the 1950s and 1960s. One-third of all Puerto Rican women were sterilized from the 1930s to the 1970s.

To this day, immigrants are sterilized against their will. As a whistleblower pointed out, in a Georgia detention center, people were being sterilized without their knowledge in 2020. “When I met all these women who had had surgeries, I thought this was like an experimental concentration camp. It was like they’re experimenting with our bodies,” the whistleblower said.

In that sense, we must expose these atrocities of the state and fight for the reproductive rights and bodily autonomy of all people and all immigrants, including the right to an abortion and the right to not be sterilized.

Republicans and Democrats Are Responsible

The responsibility for these horrible conditions is bipartisan. The border wall has been built by Democrats and Republicans alike. The ICE detention centers were built and maintained by both parties. Both parties keep kids and families in cages. It was under the Biden administration that we saw the horrendous whipping of Haitian immigrants at the border, or the 53 immigrants suffocated to death in a truck in San Antonio.

And it’s under the Biden administration, with Democrats controlling the executive and legislative branch, that Roe v. Wade is being overturned.

We fight for abortion rights, but we must fight for reproductive justice more broadly. That means the right to free and accessible abortion for everyone who wants one. It also includes the means to parent — paid parental leave for all regardless of immigration status, the end to deportations and family separations, free quality public education for all and a living wage for all workers regardless of immigration status. Reproductive justice means fighting for immigrants rights, abolishing ICE, and fighting the racism embedded in a healthcare system designed for profit that hurts both workers and patients. It is essential to build a movement that has no faith in either party, that understands that the most oppressed among us will be those who suffer the most as a result of the overturn of Roe v. Wade, and that fights for the rights of all oppressed and working people. For free, legal abortion on demand, as well as the abolition of ICE and open borders.