Imperialism Is Using Up the Resources That Could Fight Covid-19

The Covid-19 pandemic is devastating working-class people, especially people of color. Yet the U.S. government is unwilling to take action to save lives. Instead, $738 billion is spent per year on the military. 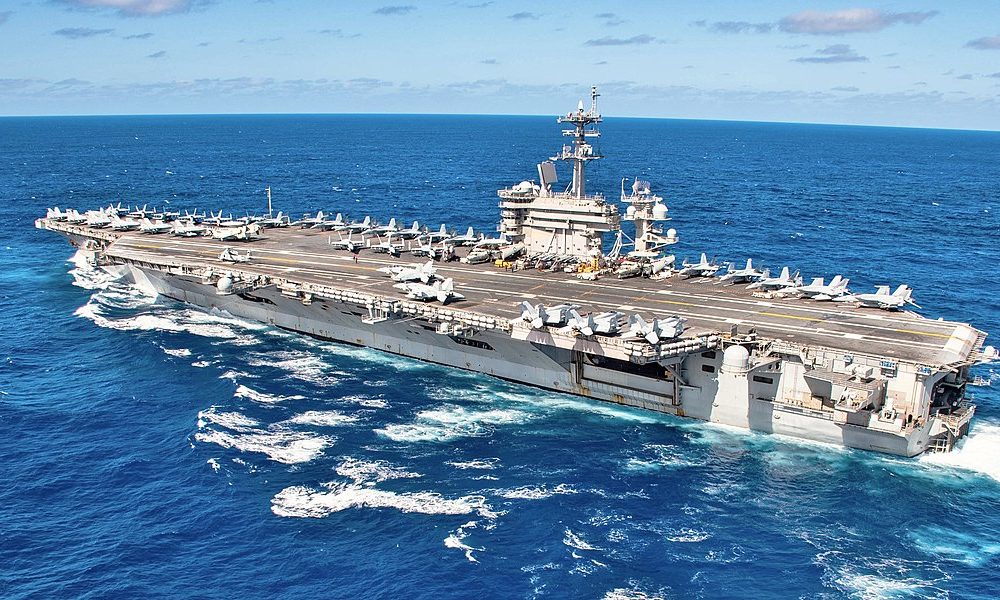 The pandemic in the United States has revealed an irrational, oppressive society. Authorities report that about 90,000 people have been killed by the disease. But as Democracy Now notes, “many researchers believe the true figure is likely tens of thousands of deaths higher.” An estimate from FEMA suggested the fatality rate could rise to 3,000 per day by June, but the report was dismissed by the White House.

Still the U.S. government is not taking emergency measures. 46 states have re-opened non-essential businesses or are planning to do so, sometimes county by county. Trump refused to wear a face mask while touring a mask factory — walking past workers in masks, ignoring signs requiring mask use. Computer modeling arguments are being put forward to suggest that immediate universal mask use is imperative to greatly reduce catastrophic spread. This may be one major explanatory variable between countries where the disease is catastrophic, like the United States, and where it is not, like Japan.

Instead of scientific prevention, the U.S. is stepping up racist policing. In N.Y.C., 35 Black people, four Latinx people, and one white person were arrested over social distancing, and Donni Wright was brutally beaten.

The U.S. does not have paid leave for older workers, hazard pay, free healthcare for all, adequate PPE, sufficient testing, or real prevention. What the U.S. does have is a $738 billion military budget. Including related and classified funding, the U.S. spends close to $1 trillion a year on war.

After 9/11, the U.S. state merged its spy agencies into a new department of “Homeland Security.” This apparatus has been deeply involved in wars of aggression, deportations, and torture. But it has done nothing to secure U.S. residents against a deadly disease.

Supposedly, health care for everyone would be too expensive and sophisticated prevention including mass testing is just impossible. But an immense military machine is paid for every year. The U.S. government prioritizes nuclear weapons, air and naval supremacy, and dominance over China. Imperialism is not abstract — it is a murderous arrangement of resources.

Since 2013, the U.S. government has pursued an enormous 30-year “modernization” to replace its nuclear delivery “Triad.” Plans include a new fleet of nuclear missile submarines, new intercontinental ballistic missiles, and a new long-range bomber, as well as the bombs themselves.

Obama’s 30-year plan was projected to cost $1 trillion. His budget request for 2017 claimed, “We are countering Russia’s aggressive policies through investments in a broad range of capabilities … [including] our nuclear arsenal.”

As Trump took office, the Congressional Budget Office reported the nuclear “modernization” would actually cost $1.2 trillion, and the New York Times cites experts who expect it to cost $1.7 trillion. For 2021, Trump requested $46 billion for nuclear arms, together with what Reuters describes as “the Pentagon’s largest research and development budget in 70 years … to counter the growing strength of China and Russia.”

Another military mega-project is the F-35 fighter jet, begun in 2001. The Pentagon has estimated that acquiring and operating this super-jet until 2070 will total $1.5 trillion. The plane was designed for stealth, maneuverability, and digital control, and industry spokesmen boast it can shoot down 20 enemy planes for every loss. The U.S. plans to sell F-35s to all of its closest allies. (And interestingly, while Bernie Sanders has criticized the bloated military budget, he has openly supported the F-35.)

The U.S. wants to maintain its military dominance in Asia. In 2011, Obama declared to the Australian parliament, “As a Pacific nation, the United States will play a larger and long-term role in shaping this region and its future.”

Defense secretary Leon Panetta announced a shift from a 50-50 to a 60-40 ratio of warships in the Pacific and Atlantic. Plans were made to station 2,500 U.S. marines in north Australia, and new coastal combat ships were built and sent to Singapore.

The Obama administration denied that its actions were a containment strategy against China. Panetta declared, “I reject that view entirely. Our effort to renew and intensify our involvement in Asia is fully compatible with the development and growth of China. Indeed, increased U.S. involvement in this region will benefit China as it advances our shared security and prosperity.”

In 2009, commanders of the U.S. Navy and Air Force signed a memo endorsing a doctrine called AirSea Battle. This involved displeasure with China acquiring increasingly advanced missiles, digital technology, and sea and air craft, which the U.S. calls “A2-AD,” anti-access area denial — weapons with the ability to strike U.S. battleships, planes, and bases in a wide zone around China. This was considered a “challenge” to “U.S. power-projection capabilities.” AirSea Battle meant preparing contingency plans to overcome such weapons, which would require massive bombing. Not surprisingly, a Chinese military spokesman interpreted this as aggression and suggested China was forced to make counter-plans. In 2015, the Pentagon stopped using this provocatively candid name, and AirSea Battle was renamed “the Joint Concept for Access and Maneuver in the Global Commons.”

Trump’s 2017 National Security Strategy (NSS) continued the competition against China. The document virtually promised to rule the world by the grace of God, calling for “energy dominance,” “peace through strength,” “competitive advantage,” and “advanc[ing] American influence,” while arrogantly promising U.S. influence would be “a positive force that can help set the conditions for peace and prosperity and for developing successful societies.”

The document asserted that after the Cold War and in the Obama years, the U.S. military was underfunded, leading “to the erosion of America’s military dominance.” It declared: “Great power competition returned. China and Russia began to reassert their influence regionally and globally … They are contesting our geopolitical advantages and trying to change the international order in their favor.”

The NSS denounced China’s “rapid military modernization campaign designed to limit U.S. access to the [Indo-Pacific] region and provide China a freer hand there.” It objected to China’s “infrastructure investments and trade strategies” and asserted that the U.S. military is called upon to defend the sovereignty of less powerful Asian nations from Chinese imperialism.

In 2018, the “US Pacific Command” of the Navy was renamed the “US Indo-Pacific Command.” At a subsequent Indo-Pacific Business Forum, Secretary of State Mike Pompeo called for an Asian future “where the global commons are accessible to all, disputes are resolved peacefully, and an economically ‘open’ region that includes fair and reciprocal trade, open investment environments, transparent agreement between nations, and improved connectivity.” In Trump’s trade war with China, the U.S. charged tariffs on half of Chinese imports in 2018.

A major area of contestation is the South China Sea between China, Vietnam, Malaysia, the Philippines, and Taiwan. China claims any islands within over 80 percent of this Sea, demanding hegemony even in waters much closer to its smaller neighbors. China has built up some tiny islands and sandbanks into reinforced air strips and military bases in this sea.

The U.S. has responded by regularly sending battleships to sail through the sea in what it calls “freedom of navigation operations.” It flies both high-tech reconnaissance planes and B-52 bombers over the South China Sea, calling B-52 overflights “routine training missions.”

Every year, $3.4 trillion worth of international trade is shipped through the South China Sea. 80% of China’s oil imports arrive via the Strait of Malacca at Singapore and pass through the sea. It is also believed to hold large untapped oil and gas reserves.

The U.S. has sought new military alliances to preserve its position. In 2015, it signed a military cooperation agreement with Vietnam. In March 2020, the USS Roosevelt aircraft carrier and a guided missile cruiser docked in Vietnam. The U.S. has formed a deepening military alliance with India, carrying out joint naval exercises, increasing arms sales, and placing an Indian attaché at the U.S. Central Naval Command in Bahrain.

There is wide support among the U.S. ruling class for belligerence toward China. David Rothkopf, a former Clinton administration official, Foreign Policy magazine CEO, and Carnegie foundation writer, published an op-ed titled “One foreign policy move Trump is getting right — maintaining Obama’s pivot to Asia.” During the primaries, Joe Biden compared China to Jack the Ripper, and now he has put out an ad declaring, “Trump rolled over for the Chinese.” In essence, both parties are trying to outcompete each other as more hostile to China.

During the Covid-19 pandemic, hostility between the U.S. and China has escalated. The two countries expelled a substantial number of each other’s journalists. Trump has continuously called the coronavirus “the Chinese virus” and told people to “ask China” in response to his government’s failures. And in April, the U.S. again sent naval vessels to the South China Sea.

No part of the U.S. establishment seriously questions weapons build-ups or “power projection” in Asia. These policies have been developed and supported by both Republicans and Democrats.

A system that produces new fighter jets, submarines, and missiles, but not enough medical masks and gowns, is totally irrational. Imperialism divides the world among different capitalist ruling classes and diverts mountains of human labor into means of destruction around the world, while at home essential workers in grocery stores, warehouses, hospitals, transportation, and meatpacking plants are condemned to death by their employers.

American workers are taught that we must support “our” military machine against other nations. Stories about American “freedom” are used to convince us. But this imperialist military sucks up resources that could be used to meet human needs — at home and across the world. If we want health care, rights at work, better quality of life, and a chance to stop climate change, then we need to unite with fellow workers across all borders and destroy the war machinery of all the great powers — starting with U.S. imperialism.