With his historic visit to Havana on March 22, Obama met his objective of consolidating a new policy toward Cuba – one of “dialogue and cooperation.” In doing so, he has laid the foundation for the return of North American capital – after having been expelled from the island over half a century ago – as part of the gradual process of capitalist restoration propelled by Raúl Castro. 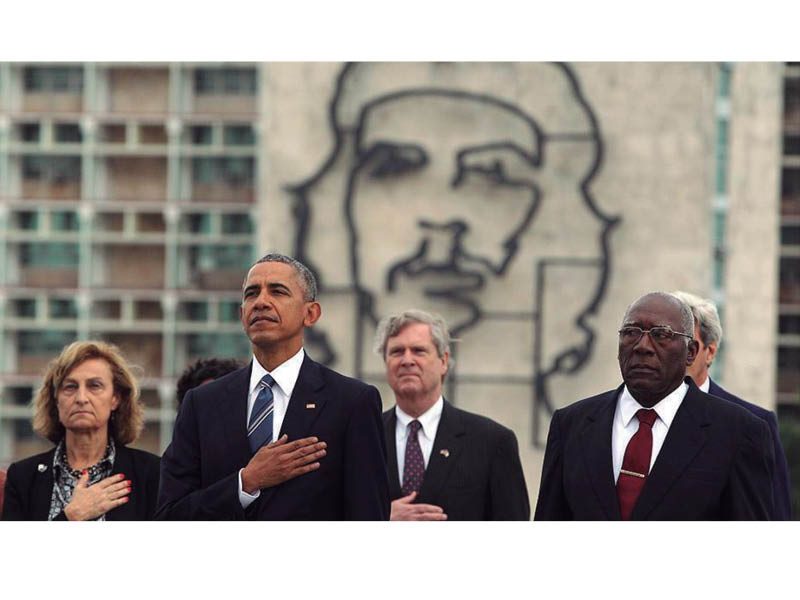 Obama confirmed the end of the United States’ line of aggression and economic sanctions that aimed for “regime change,” a strategy that over the years has shown itself to be completely impotent. In doing so, he has consolidated a historic shift in Washington’s Cuba policy, which showed its first signs in December 2014, after months of secret negotiations that took place under the Vatican’s urging toward a policy of “dialogue, cooperation, and mutual respect.”

While the White House is still far from gaining Congress’ go-ahead to lift the embargo, the administration is creating more flexible conditions to permit certain investments and commercial exchanges that favor U.S. capital, which has fallen behind other countries in its participation of capital penetration on the island.

On the one hand, he expresses the (definitely false) notion that Washington would be willing to respect Cuba’s political independence and the sovereign decisions of the people.

In his speech at the Gran Teatro de la Habana, demonstrating the depth and resolute nature of the shift in Cuba policy, Obama said, “What changes come will depend upon the Cuban people,” and later, “I’m hopeful for the future because I trust that the Cuban people will make the right decisions.” With this, he wanted to send a double message. On the one hand, he expresses the (definitely false) notion that Washington would be willing to respect Cuba’s political independence and the sovereign decisions of the people. On the other, he reaffirms his objective: to secure a political opening that could usher in a change in government that is more aligned with US interests, in order to pacify the most rancid sectors of the Republican right and the anti-Cuba lobby in Miami.

The first message answers a demand coming from both the government bureaucracy and moderate sectors of the “dissident” right. This bureaucracy seeks to reaffirm itself as the direct interlocutor of imperialism in Cuba and direct the process of capitalist restoration according to its own rhythm and forms, following the style of the China model.

This moderate opposition (to the right of Raúl Castro) asks that Washington stay out of Cuba’s internal politics in order to conceal its pro-imperialist stance – and the fact that any “normalization” of relations necessarily means, as a strategic objective, the re-establishment of Cuba’s subordination to international capital and U.S. monopolies in particular.

New relationships – marked by the considerable increase in exchanges between family members from both countries, the jump in tourism, and the arrival of important U.S. companies such as Verizon, not to mention hundreds of entrepreneurs searching for “new opportunities” – are developing; an opportune time for Obama’s visit, just weeks before the 7th Congress of the Communist Party in Cuba.

The masses of workers are banned from debating, proposing, modifying or correcting the current course.

During the last Congress (April 2011), the party voted on the “general economic guidelines,” which marked a push for pro-market structural reforms. In the upcoming opportunity, the central objective will be to “update” the guidelines for the 2016-2021 period and “do not, therefore, represent anything different in terms of the road taken, but rather a higher level expression” ([Granma March 27, 2016-> http://en.granma.cu/cuba/2016-03-28/party-congress-less-than-a-month-away
]). The six documents that will be voted upon will not even be published, and have only been made known to 1,000 delegates.

The masses of workers are banned from debating, proposing, modifying or correcting the current course. The CCP bureaucracy has assumed a monopoly on popular representation. There is no right to strike and no freedom of union organization. Meanwhile, the Raul Castro government has for several years now converted the Catholic Church, an open advocate of capitalist restoration, into a key political actor.

Down with the imperialist blockade, in defense of social conquests

Now more than ever, it is necessary to confront imperialism – primarily the economic embargo that the United States has maintained since 1962 – and defend the social conquests that have survived despite the major bureaucratic deformations and pro-capitalist reforms.

It is necessary to fight for a real government of the workers and the people.

Some indispensable and urgent measures would be an increase in wages and dignified housing. The resources are there, but are instead being used for more country clubs and tourist complexes. Hundreds of thousands of workers are laid off while the privileges of the bureaucracy – that administers the multimillion-dollar enterprises associated with international corporations – go untouched. It is necessary to fight for a real government of the workers and the people

In place of the reactionary one-party system that strangles any initiative from the masses, workers and poor farmers can impose a truly revolutionary system, based on their own organizations built in the heat of struggle and with the fullest workers’ democracy.

In short, a political revolution that places the self-organized and self-determined workers in the position of truly exercising power over the State. It would thus become possible to revise all the bureaucracy’s concessions to capital – such as the reform package passed in the last few years (and those of the ’90s) – in favor of the interests of the laboring masses rather than those of a miniscule, priviledged sector. The political revolution will then face important social reforms, although it would not have to expropriate the capitalists as the social revolutions in neighboring Latin American countries would have to.

The Cuban masses face an enormous task in order to avoid falling back under imperialist domination. Any revolutionary perspective must include all the continent, including our working class brothers and sisters in the United States.