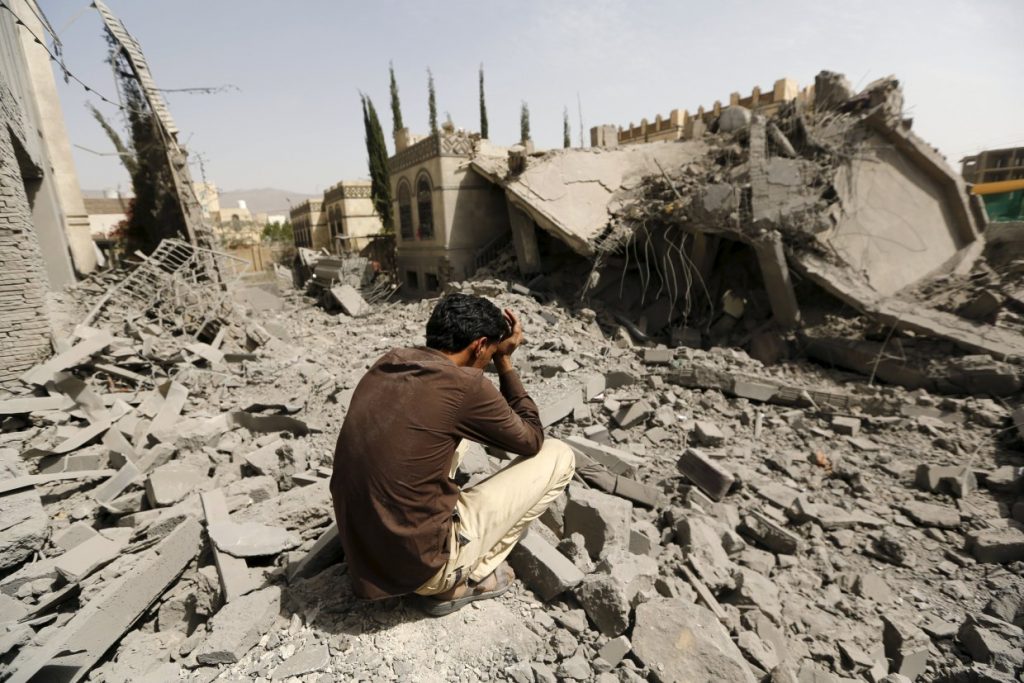 Yesterday, at least 70 people were killed and more than 130 injured after an airstrike carried out by the Saudi-led coalition hit a prison in Yemen. Another airstrike on the same day hit a telecommunications building in the strategic port city of Hodeidah, causing a nationwide internet blackout in the country. At least three children were killed in that attack.

The attacks come in the context of an escalation in the Yemen conflict earlier this week after a Houthi-led attack on Abu Dhabi, the capital of the United Arab Emirates. The UAE, a Saudi ally and member of the Saudi-led coalition fighting the Houthis (who have the backing of Iran), have attempted to ease tensions with Iran in recent years, but regional instability highlights the complex nature of the UAE’s diplomatic rapprochement.

As the events of this week point to an escalation of hostilities, the Biden administration’s plans to end the war in Yemen and advance in the “pivot to Asia” seem distant at best. While earlier in 2021 Biden revoked the Trump administration’s designation of the Houthis as a terrorist group and ended support for what he called “offensive operations” by the Saudi-led coalition, recent moves by his administration tell a different story.

In a press conference on Wednesday, Biden said: “Ending the war in Yemen takes the two parties to be involved to do it. And it’s going to be very difficult.” The comments come a month after his administration approved $650 million in arms sales to Saudi Arabia through Congress under the pretext that the weapons were for “defensive purposes.” In Wednesday’s press conference, Biden also signaled that he was considering re-designating the Houthis as a terror group which could exacerbate Yemen’s humanitarian crisis by making it harder for aid to reach the country.

The Roots of the Crisis in Yemen

Yemen, which is one of the Arab world’s poorest countries, has been the site of a devastating civil war which has roots in the processes of class struggle opened up by the Arab Spring. The uprisings in Yemen in 2011 led to the fall of the country’s long-time authoritarian president, Ali Abdullah Saleh, who was succeeded by his vice president, Abdrabbuh Mansour Hadi.

In 2015, after an agreement was forged between Hadi’s government and the International Monetary Fund (IMF) to reduce oil subsidies to pay the country’s debts, mass protests forced the resignation of Hadi and led to the takeover of the Yemeni government on behalf of the Houthis, a Shia rebel group backed primarily by Iran. As the Houthis advanced in their offensive, a full blown civil war broke out between the supporters of the government of Hadi and the Houthis.

While Yemen is strategically important because it sits on a strait linking the Red Sea with the Gulf of Aden, (through which much of the world’s oil shipments pass), above all the conflict is part of the regional power struggle between Shia-ruled Iran and Sunni-ruled Saudi Arabia. With the weakened influence of the United States in the region in the aftermath of its adventuristic interventions in Iraq and Afghanistan, Iran began to position itself more and more as a regional power to fill the power vacuums left by the United States.

With Iran’s backing of the Houthis in Yemen, Saudi Arabia decided to intervene militarily in Yemen in 2015 to save its backyard from the influence of its chief regional rival with the help of eight other mostly Sunni Arab states and importantly the material and political support from the United States, the United Kingdom, and France.

For the United States, the conflict in Yemen was an important opportunity to ramp up lucrative arms deals with Saudi Arabia to secure profits for the vast military-industrial complex of U.S. imperialism. In many ways, Yemen also became a hallmark of Obama-era foreign policy. What the Obama administration dubbed the “Yemen model” provided a blueprint for the United States’ strategic plans to shift to confronting China by committing as few resources as possible to insurgent conflicts in the Middle East and the use of drone warfare rather than U.S. ground troops so that the conflicts were out of sight and out of mind.

In fact, in many ways Yemen has become a “forgotten war” among the U.S. populace but without a doubt, the savage drone campaign unleashed by the Nobel Peace Prize winning Obama that killed nearly 700 people is not to be forgotten by the Yemeni people. And for us socialists, it’s a brutal reminder of the bipartisan nature of U.S. imperialism.

And beyond the outright military support for the Saudi-led coalition, since the start of the war, the United States and the rest of the coalition has reinforced a heinous economic and humanitarian blockade which primarily affects the popular classes of Yemen. Today, despite the millions invested in the reactionary war, the Saudi-led coalition has been unable to impose a puppet regime or prevent the advance of the Houthis and other insurgent Islamist groups like the Islamic State which now control the capital Sanaa and the majority of North Yemen.

The United States continues to wreak death and destruction in Yemen, bringing about an unimaginable level of suffering for the Yemeni people. In December 2020, the United Nations reported that the conflict had caused an estimated 233,000 deaths, including 131,000 from indirect causes such as lack of food, health services, and infrastructure. Tens of thousands of Yemenis have been killed or wounded as a direct result of the fighting, including more than 10,000 children.

Four million people have been forced to flee their homes and more than 20.7 million — 71 percent of the population — are in need of some form of humanitarian assistance or protection for their survival. At least 5 million people are on the brink of famine and almost 50,000 people are already experiencing famine-like conditions. An estimated 2.3 million children under the age of five are acutely malnourished, including 400,000 who are at risk of dying without treatment, according to the UN.

One out of every two people in Yemen also do not have access to safe water, which has left the country struggling to deal with the largest cholera outbreak ever recorded. This has resulted in 2.5 million suspected cases of cholera and about 4,000 related deaths since 2016. The war-torn nation has also become the breeding ground for a dengue fever epidemic since 2019.

That’s all without mentioning the effects of the Covid-19 pandemic in a country with a nearly collapsed health system. Only half of Yemen’s 3,500 medical facilities are fully functioning and 20 percent of districts have no doctors — meaning at least 20 million people lack access to adequate healthcare.

In the face of this tragic scenario, it’s clear that U.S. imperialism has no interest in ending the catastrophe in Yemen nor in any of the other countries in the region, as the recent withdrawal and subsequent humanitarian crisis in Afghanistan showed. Moreover, workers cannot depend on reactionary bourgeois forces of any kind to find a way out of the crisis in Yemen. Instead, the struggle for peace in Yemen must rely on the power and methods of the working class, in the spirit of the masses who took to the streets in Yemen in 2011 and with support from the international workers’ movement in the tradition of the antiwar movements of the past.

In solidarity with the struggle of the Yemeni people, working people around the world should immediately denounce the bombings and arms sales which merely serve capitalist profiteering at the expense of human lives. We should call for an end to the criminal blockade which prevents the delivery of urgently needed food and medical supplies to the Yemeni masses. And we must defend the Yemeni people’s right to self-determination in the face of foriegn interference which denies an independent path forward out of this horrifying conflict.