In Blow to Palestine, Morocco Sides with U.S. and Normalizes Ties to Israel

A reactionary diplomatic bargain between Trump and the Moroccan monarchy is a double blow to the causes of the Palestinian and Saharawi peoples. 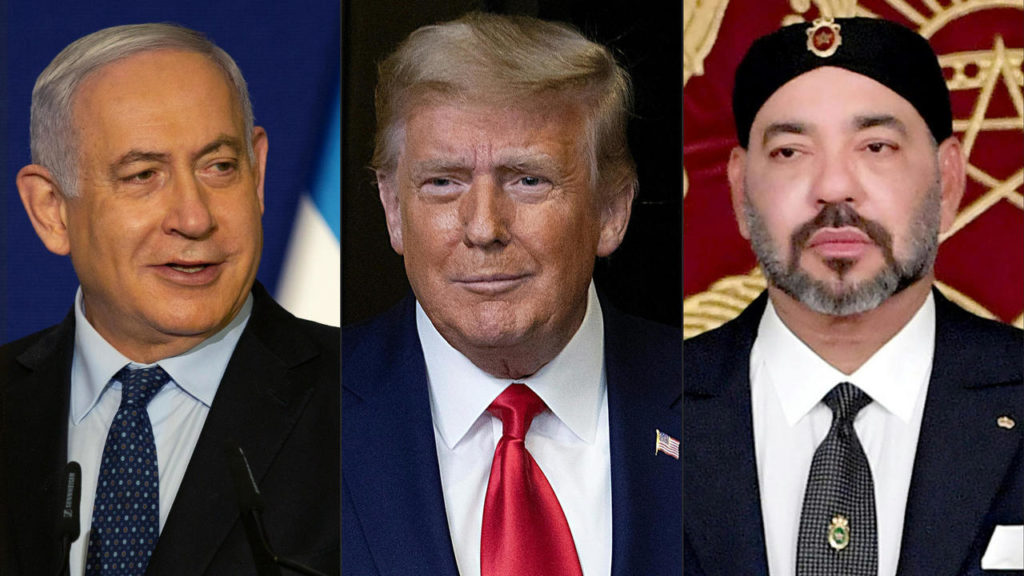 Last Thursday, President Donald Trump announced on Twitter that Morocco will establish full diplomatic relations with Israel after reaching an agreement with the United States. Morocco will become the fourth Arab country to normalize relations with the Zionist state in the last four months, joining the United Arab Emirates, Bahrain, and Sudan. But Trump’s announcement did not end there — the United States will now recognize Moroccan sovereignty over the disputed territory of Western Sahara, whose population has struggled for independence for decades.

For Trump, this agreement is a rare geopolitical victory: breaking Israel’s isolation by the Arab states through agreements to normalize bilateral relations. His administration hopes to reach a similar agreement between Saudi Arabia and Israel, which his advisor and son-in-law Jared Kushner has called “inevitable.”

But while the deal may be a victory for the Trump administration and the Israeli government, it is a loss for Palestinians. Restoring diplomatic relations with Israel means normalizing the Zionist, settler-colonialist regime which flouts international law by violating Palestinians’ rights. The Israeli government will only become more emboldened in its illegal occupation of Palestine, annexation of its territories, and its aggression against Palestinians. Every U.S.-mediated deal struck between Arab League countries and Israel is another blow to Palestinian human rights and self-determination.

With Trump’s announcement, the reactionary and pro-imperialist monarchy of Moroccan King Mohammed VI strikes a double blow against the Palestinian cause in the face of Zionist colonialism and against the struggle for the right to self-determination of the Saharawi people. Western Sahara, which has been called as “Africa’s Last Colony,” has been occupied by Morocco since 1975, when Spain gave up its rule over the area, in defiance of the United Nations.

The United States thus becomes the first and only Western country to recognize Morocco’s sovereignty over this disputed territory. Although Trump will soon leave office, it is not obvious that Joe Biden can back away: the agreement to normalize relations with Israel depends on the “bargaining chip” of Western Sahara.

On the Moroccan side, this agreement is an important step towards its strategic aim of controlling Western Sahara. In fact, Morocco has significant investments in the region and hopes to exploit the Saharawi natural resources, including its lucrative fishing industry and phosphate reserves, a key ingredient in synthetic fertilizer. Western Sahara may also also have untapped oil and gas reserves. In 2016, Morocco launched a $1.8 billion investment plan for the occupied region, including funding for new factories for the state-owned phosphate company OCP.

However, Western Sahara’s natural resources are not the only reason why Morocco is interested in the territory. Morocco aims to establish itself as the commercial and industrial link between West Africa and the European Union. One of the trade routes connecting Morocco’s Mediterranean ports with West African capitals such as Dakar passes through Western Sahara. For the regime in Rabat, the first priority is developing a high-speed rail link between the northern port city of Tangier and La Güera , at the southern tip of Western Sahara. This train line would continue across the Atlantic border with Mauritania, creating a “high-speed commercial transport corridor from the shores of the Western Mediterranean coast to the border of West Africa.”

This deal could have important local consequences. A few weeks ago, Morocco launched an offensive against the Polisario Front, the UN-recognized Saharan independence movement,, which controls a fifth of the disputed territory and has the support of Algeria. After the offensive, the Polisario Front declared that their 29-year-old ceasefire with Morocco had been broken.

Algeria is also interested in access to the Saharawi ports on the Atlantic, and therefore opposes the Moroccan push. Morocco’s advances in Western Sahara might not only intensify armed confrontations with Polisario Front forces, but also risk greater Algerian involvement. So far, Algeria has mainly called for calm, and highlighted the need for an independence referendum. Algeria has largely avoided foreign conflicts since its own internal turmoil in the 1990s, but it may be drawn into the conflict in Western Sahara in response to Morocco’s intensified military operations in the area. Given the build-up of arms between the two countries in recent years, a conflict between Morocco and Algeria could be devastating.

Once again, we see that the regimes of Africa’s Maghreb region and of the Middle East have nothing to offer workers and oppressed people. Imperialist powers partner with the most reactionary regimes to achieve their own objectives. Let us not forget that one of Morocco’s main allies in its southward push is France, which has big investments in the country’s infrastructure and automobile sector through such companies as Peugeot and Renault. Morocco’s other allies — and the main partners of French imperialism — are Gulf monarchies such as the United Arab Emirates, which have also “normalized” their relations with Israel.

As imperialism and its local allies flout the rights of the Palestinian and Saharawi peoples, the international working class must show its solidarity with these oppressed peoples for their right to self-determination. The Moroccan people have repeatedly expressed their support for the Palestinian cause, unlike their reactionary government, which legitimizes Zionist colonization. They have no interest in supporting the nationalist policy of that same government in Western Sahara. As for the workers of France, given their links with the proletariat of the Maghreb, it is our duty to oppose all imperialist plans in the region and to express our maximum support for the struggle for self-determination of the Palestinians and Saharawis.

First published in Spanish on December 12 in La Izquierda Diario.