On February 10, junior doctors in England (the equivalent of medical residents in the US) took part in their second 24 hour walkout from 08:00. The industrial action will continue, as talks between medics and managers have failed to reach agreement. 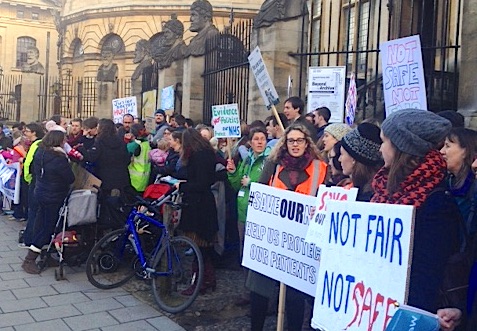 Left Voice interviews Sophie, a medical student in London, to give an account of the dispute.

Can you explain the background of the dispute?

Although the dispute has intensified over the last six months, the contract negotiations have been ongoing since October 2013.

Doctors and students’ anger reached boiling point in September 2015 when an independent review body, the Doctors and Dentist Review Board, sided with NHS Employers. They proposed a contract that increased core working hours, weakened key safeguards to junior doctors’ hours and removed assurances for career progression for those working part time, or taking time out.

Junior doctors were balloted for industrial action in October 2015, almost a year on from when union representatives walked out of contract negotiations with NHS Employers. The ballot was phenomenal: 76% turnout with 98% backing full industrial action.

Since the vote, doctors have taken 2 days of industrial action. Thousands of hospitals were made to scale down their elective work and only provide emergency care. The strike was solid, despite claims by the government that many doctors continued to go to work – their statistics included the junior doctors who were scheduled to provide the emergency cover, working in emergency departments and on call.

Now junior doctors are faced with the imposition of the contract in August 2016. Those negotiating for the government, the directors of NHS Trusts across England, could see that the BMA would not back down on the issue of Saturdays being considered normal working hours. They signed a letter to Jeremy Hunt recommending imposition, and that is what he did.

The BMA has retreated to regroup before initiating more action against the imposition. Junior doctors and medical students are building networks on the ground to build workplace-based resistance to the contract.

What are the demands of junior doctors?

There have been a number of key issues, some which have been won.

Key issues at the beginning of industrial action:
– Lengthening of the normal working day from 7 pm to 10 pm, Monday to Saturday.
– Reduced compensation for anti-social hours worked [night and weekend shifts that affect the balance between work and personal life].
– Replacement of annual pay progression to hours-worked pay progression, making it harder to get a promotion if doctors work part time work or take maternity leave, and lengthening the time between promotions.
– No up-front assurances on addressing existing pay gaps between competitive and less competitive jobs,
– An increase in the number of night shifts worked per week.
– Expectation of doctors to be called in to work at night without adequate financial or rest-time compensation.

While a number of these have been negotiated, the “red lines” or non-negotiable terms for the BMA remain:
– Lengthening of the normal working day from 7 pm to 10 pm, Monday to Saturday. Working at 5pm Saturday is not the same as 5pm Tuesday. [At the moment, junior doctors can work up to 12 hours (M-F) without receiving any overtime pay. With the new contract, those shifts can increase to up to 17 hours (7 am to 10 pm). At the present, weekend shifts (7 am to 7 pm) are paid at an overtime rate, but the government wants to reduce this to “normal” pay with no overtime.]
– Reduced compensation for anti-social hours worked.
– Expectation of doctors to be called in to work at night without adequate financial or rest-time compensation.

What were your experiences in the last strike (demos, pickets, etc.)?

The demonstrations have included both spontaneous evening demonstrations, walking around Westminster and larger weekend demonstrations with official routes and speakers. They helped build momentum into the strike action, and to display anger at the imposition.

The picket lines were mixed. Some stuck to the official BMA advice to have only 6 strikers at each picket at any time, while others used the opportunity to organise as many junior doctors, health activists and medical students outside their hospitals as possible. Regardless of the size, every hospital across the country had a picket line. I think that is pretty impressive for such a young, inexperienced trade union movement.

What kind of support have junior doctors received?

The support has been overwhelming – from patients on the wards, to consultant doctors, to members of medical school faculties. There has been amazing support from other health workers too. All understand that this contract is the barrier between a fair, safe NHS and one which bullies its staff, with no respect for their commitment to their jobs. If this contract goes through for doctors, it will go through for everyone.

It has also been encouraging to see that public support has grown for junior doctors across the strike action – which is unprecedented among public sector strikes. I think junior doctors have been effective in communicating their message to the public, using avenues beyond the media, such as public flyering sessions.

Is there a wider context to this? What are the broader issues of the state of the NHS (ie., the NHS in financial crisis) behind the attack on junior doctors and a new contract proposed by the government?

Yes! Making weekend labour cheaper will enable hospitals to run more elective work at the weekends, without hiring the extra staff or investing in the buildings and equipment required. There is growing pressure on the NHS to become more attractive to private investment, and increasing “capacity” by running more operations and more clinics. Using the new contracts does exactly that. It is almost besides the point that there is already a 24/7 emergency NHS, and that few patients want their dermatology appointment scheduled for a Sunday morning.

Rather than admit the crippling lack of funding that has gone into the NHS over the course of the last two governments, and waiting time figures to support that, the government tries to blame junior doctors for being “greedy” or undermine their commitment to their patients as just routine “vocation”.

What is the current situation regarding the negotiation after which the BMA called off the second planned strike due to start on January 26th?

We just have to wait and see. The BMA is calling emergency meetings, both in London and in other cities, gauging the opinion of its members before it releases a statement next week.

Many junior doctors are disappointed with the slow response – given imposition was always a possible outcome of the negotiations, why weren’t the BMA prepared with a press statement and course of action that its members could rally behind?

Many would like to see escalated industrial action, not just one day from one month to the next, but continuous strike action, 5 days, 10 days until the contract imposition is removed.

However, there are also calls from many junior doctors to lead a mass resignation, waiting until a certain proportion of junior doctors support the call and then threaten the government with a total crisis.

This tactic is particularly worrying. It would both pose a real risk for the individuals involved (possibly losing their training jobs, difficulty being rehired into the NHS) and offer an advantage to the government and private health care. The government would find more doctors to hire on the new contract, possibly from abroad as they have done with EU and non-EU nurses. Private health care would instantly find itself a new pool of employees, something it has struggled to do amidst the strong devotion of junior doctors to the NHS, which has trained them. But when you have the option or a job with good pay, in the private sector, or no job in the NHS, I think people will be left with few alternatives.

While we wait for the BMA to respond, we need to build solidarity on the ground. Now. We need to convince other doctors that this is the time to organise. Meet at work, organise to meet with other trade union representatives. Too much is at stake to lose momentum.