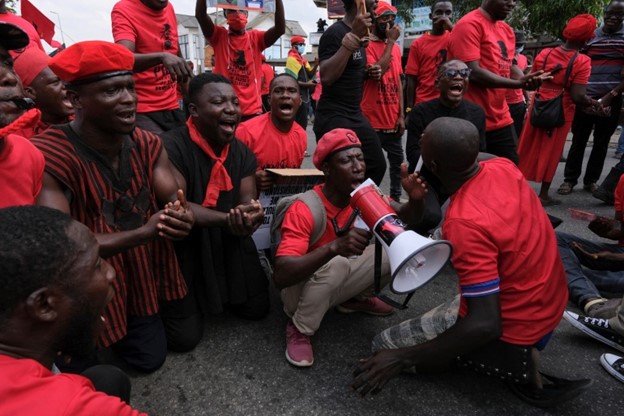 Protesters in Ghana are rejecting the IMF and President Nana Akufo-Addo. On November 5, roughly 1,000 Ghanaians marched through the streets of the country’s capital chanting “IMF no” and “Akufo-Addo must go.”

The global cost-of-living crisis is crushing workers, with the most acute crises taking place in the Global South. In September, consumer inflation in Ghana topped 37 percent and the country’s currency has lost 40 percent of its value. To respond to this, the president is in talks to make a deal with the IMF. Like all IMF deals, this will address the economic crisis in Ghana by imposing austerity measures on the country’s poor and working class.

The movement in Ghana launched back in June with two days of protests which drew several hundred Ghanaians. It is a positive sign that the most recent protests had even larger participation. So far, all of the protests have been met with a large and militarized police presence.

Leading these protests is the recently formed coalition, Arise Ghana. Its leadership is tied to opposition parties such as the National Democratic Congress (NDC) and the People’s National Convention (PNC). The leadership’s connection to multi-class opposition parties should open important questions about their strategy for the movement and the role of the working class.

These protests are the latest in a cost-of-living crisis that’s gripping the world. For the Global South, it means the specter of IMF bailouts that spell more precarity for the working class and oppressed. Ghanaians are joining millions across the world in standing up against these bourgeois governments that make workers pay for capitalism’s crises, often at the direction of predatory imperialist institutions. In Argentina thousands have similarly been taking to the streets since 2019 to repudiate the foreign debt, calling for its cancellation. Anti-IMF protests in Buenos Aires last year brought 35,000 people into the streets.

The protests in Ghana are particularly striking for their rejection of the IMF. For the movement to become even more dynamic, it is essential for the working class and oppressed to move beyond the leadership of the opposition parties. Sri Lanka offers a recent example of the limits of anti-austerity, anti-IMF movements led by bourgeois parties seeking electoral gains.

While Sri Lanka’s anti-IMF movement is once again picking up, its main demands have been betrayed by the opposition parties which sought to capitalize on the crisis. The same corrupt political caste rules the country and is seeking a new IMF bailout. Even the hated prime minister who was forced out of the country at the height of the protests has returned and is living in a mansion as the Sri Lanka masses continue to suffer.

To realize all their aspirations and stand firm in refusing to bear the cost of this crisis, Ghana’s working class needs to take an independent path, using their full power in the workplaces and in the streets to fight back against austerity and exploitation, and forming their own institutions and leaders to decide their fate.