In the Face of the Pandemic, Lift the Sanctions on Iran Now!

Sanctions are nothing new but in the midst of the coronavirus disaster they’ve unleashed a humanitarian crisis within sanctions-hit nations like Iran. Socialists in the US must vehemently denounce and demand that sanctions are lifted immediately. 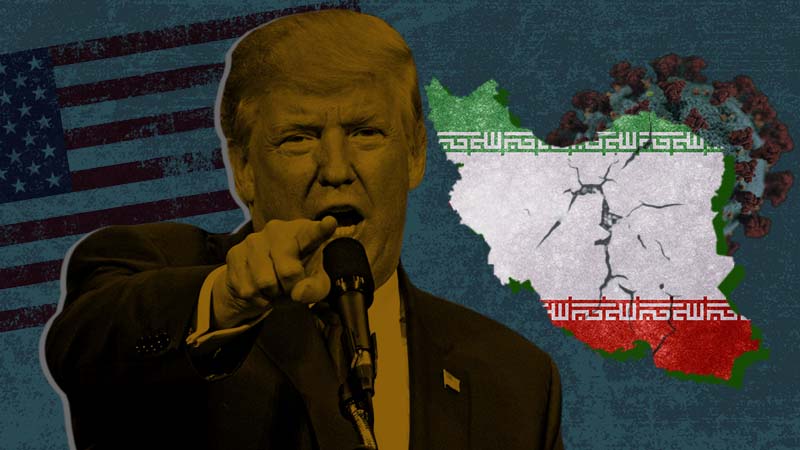 As of March 20, Iran has almost 20,000 confirmed cases of coronavirus and 1,433 deaths – the largest number of deaths outside of China and Italy. Within Iran, major cities are digging mass graves, and several top officials have already succumbed to coronavirus – with at least 8 percent of Iranian parliament carrying the disease.

“Based on our information, every 10 minutes one person dies from the coronavirus and some 50 people become infected with the virus every hour in Iran,” Kianush Jahanpur, an Iranian health ministry spokesman, wrote on Twitter.

As an indicator of the profound nature of the crisis, 85,000 prisoners (about half of its prison population) were temporarily released by the reactionary Iranian government to help stem the spread of COVID-19 within Iran’s overcrowded and disease-ridden jails and Iran’s Revolutionary Guards have been brought in to ensure Iranians abide by a public curfew reflecting a dramatic escalation in efforts and a transfer of power from political to military rulers.

However, these measures have not slowed down the epidemic unfolding in a country with badly degraded infrastructure and dire economic conditions. Even before the devastation wrought by COVID-19, Iran had been struggling to cope with the consequences of U.S. sanctions with millions of young people suffering from unemployment, a diminished national economy, and a shortage of basic goods, particularly within the health sector. Iran is in even worse shape today.

The situation in Iran is compounded by the fact that the Trump administration reimposed sanctions on Iran in May 2018 after pulling out of the nuclear deal. Additional sanctions imposed in the aftermath of Qasem Sulemani’s assasination allowed a U.S. policy of  “maximum pressure” aimed at crippling the finances of Iran’s government – to fully take hold.

Though most protective gear, such as masks and disinfectants, are produced in Iran, hoarding has led to shortages that are difficult to mitigate. U.S. sanctions have made it virtually impossible for the country to export oil and import badly needed medicine, medical equipment, and food needed to fight this major outbreak.

“There is an extreme shortage of these supplies in-country, where stock is often low due to the steep price of medicines and medical equipment — a consequence of U.S. sanctions,” Relief International said on February 29.

The inhumanity of Trump’s sanctions

Until recently, “humanitarian trade” for vital necessities like medicine was not impacted by the sanctions. Humanitarian trade with Iran was legislated in the wake of the Iraq Oil-for-Food scandal, and is enshrined in the Trade Sanctions Reform and Export Enhancements Act of 2000 (TSRA). That bill mandates that the Treasury Department’s Office of Foreign Assets Control (OFAC) allow for the exportation of certain humanitarian goods (food, medicine, and medical devices) in jurisdictional sanctions programs, such as that in Iran.

In September 2019, President Trump gave the Central Bank of Iran (CBI) a terrorism designation, removing the humanitarian exemption that was previously in place. This has created a major impediment to humanitarian trade given the CBI’s prevalence within the Iranian economy and in foreign exchange markets. Without a doubt, the CBI designation was a deliberate attempt by the U.S. to strangle humanitarian transactions.  It couldn’t have come at a worse time.

Before the designation, Iranians at least had a pathway, however small, to receive much-needed basic necessities. Today, in the midst of a humanitarian crisis, sick people are going without vital medicine, compounding an already alarming death toll in Iran.

Likewise, sanctions are also putting added pressure on the damaging financial crisis within Iran. As a marker of the severity of Iran’s economic crisis, Iran last week requested a $5 billion emergency loan from the IMF.

It was the first time since the1979 revolution that Iran asked for help from the IMF – a brazen institution driven by the policies and interests of U.S. imperialism that promote austerity policies against the working class and the poor – contradicting Iran’s previous criticism of the institution for ideological reasons.

It seems that not even a global health crisis can stop the U.S. imperialist project in the Middle East. Last week, on the birthday of assassinated Iranian General Qassim Suleimani, a barrage of rockets fired into the Camp Taji airbase close to the Iraqi capital of Baghdad. The US immediately pinned the attacks on Iran-backed Shia militias and the next day retaliated by launching airstrikes on five locations in Iraq and announcing even more sanctions aimed at nine entities and three individuals “who have engaged in activity that could enable the Iranian regime’s violent behavior,” according to Secretary of State Mike Pompeo.

Despite Pompeo’s assertion, the sanctions are in reality meant to target Iran’s petrochemical industry to push Iran into an even deeper economic hole. It’s outrageous, to put it mildly, that the U.S. is continuing their destructive and inhumane policy of imposing sanctions and beefing up military spending rather than ending sanctions and redirecting funds toward combating an unprecedented public health crisis. Ordinary Iranians, Iraqis, and Americans can ill-afford violence in the middle of a pandemic that, without adequate action, is already contributing to death and destruction that disproportionately affects the working classes in those countries.

Other sanction-targeted countries are also under strain

When crises like pandemics ravage the globe, in a socialist society one would expect that countries work together in every way possible to mitigate the spread and impact of a deadly virus on society. Capitalism, however, imposes a different world order, one in which an imperialist block, led by the U.S., criminally targets countries like Iran, Cuba, and Venezuela.

In Venezuela, like Iran, the U.S. recently ramped up its sanctions to deliver a blow to Venezuela’s health sector as coronavirus spreads in the country. In 2019, sanctions were intensified to include an oil embargo (Venezuela’s economy is based on oil exports) and a ban on all transactions with Venezuelan state entities. A round of sanctions imposed in August 2019 had already authorized secondary sanctions against third parties dealing with the Venezuelan State.

So far, these latest rounds of sanctions have taken a heavy toll,  not only on the billions of dollars worth of damage to the Venezuelan economy, but also on the health of the populace. Right now, crushing sanctions imposed by the Trump administration force Venezuela to spend three times more on coronavirus testing kits than non-sanctioned countries  – severely hindering the ability of the Venezuelan government to respond to the pandemic.

Moreover, long-standing sanctions have decimated Venezuela’s health sector over the past five years, most notably leading to inadequate infrastructure and medical supply shortages. Venezuelan President, Nicolas Maduro, recently requested a $5 billion loan from the IMF in order to fight the coronavirus. Unsurprisingly, the U.S.dominated IMF rejected the request as a political maneuver –  the U.S. and its allies recognize Juan Guaido as interim president of Venezuela and want to install him as its leader.

Elsewhere in Latin America, Cubans are developing a vaccine that could potentially save the lives of millions if effective, yet over the past 12 months, the U.S. has hit Cuba with perhaps the most potent sanctions in half a century. Since last year, the U.S. has sanctioned tanker companies delivering petroleum to Cuba from Venezuela, a close ally of Cuba. In short – Cuba needs oil and healthcare systems run on cheap oil. With the strict rationing of oil, oxen and horses are being used more and more for transport needs within Cuba.

Cubans are no strangers to the ravages of sanctions at the hands of imperialist nations. The U.S. embargo on Cuba was introduced in the 60s with the explicit goal to “bring about hunger, desperation, and overthrow of the government,” according to the U.S. Department of State.

In the throes of the coronavirus crisis, it’s nearly achieved its goals and could decimate the lives of Cubans even more.  Shortages of goods like soap, which were already in short supply, could now initiate dire situations.

If there was ever a time to end sanctions, a humanitarian crisis of this magnitude should be a chance to end inhumane economic sanctions and blockages against countries like Iran, Venezuela, and Cuba.  Due to the abhorrent violence of U.S. sanctions, people all over the world are left with limited resources, without adequate access to medical supplies, and with over-burdened medical systems.

What U.S. foreign policy likes to call a policy of “maximum pressure” is designed to inflict the greatest levels of harm, starvation, poverty, and scarcity in the name of “democracy” and “freedom.”

As the COVID-19 pandemic increases its reach around the world, countries in dire need of emergency aid and those that are struggling the most with this health crisis ought to receive relief. The working class in the U.S. must denounce the economic warfare imposed on these countries and call for an immediate end to sanctions on countries like Iran to reduce further death and suffering as much as possible.

Many countries that aren’t even targeted by sanctions are still victims of U.S. imperialism. The global poor is targeted by imperialist governments, especially in times of crisis, through instruments like the IMF and World Bank. Institutions of international capital should be denounced for exploiting poor countries through exorbitant debt obligations that prevent these nations from investing in the health infrastructure needed to deal with a crisis of any magnitude.

Finally, U.S. militarism should be denounced on the grounds that it only exists to serve U.S. interests, deepening the inability of a country to respond to this health crisis. Socialists should call for military aid to be redirected, U.S. bases closed, and occupations and military strikes to be suspended indefinitely.