In the Midst of the COVID-19 Crisis, Cyclone Amphan Ravages Parts of South Asia

On Wednesday afternoon, a super cyclone, Amphan, made landfall in the coast around the Bay of Bengal. With towns and villages completely destroyed and over 80 dead, this cyclone brings new challenges as the region deals with the ongoing coronavirus crisis. 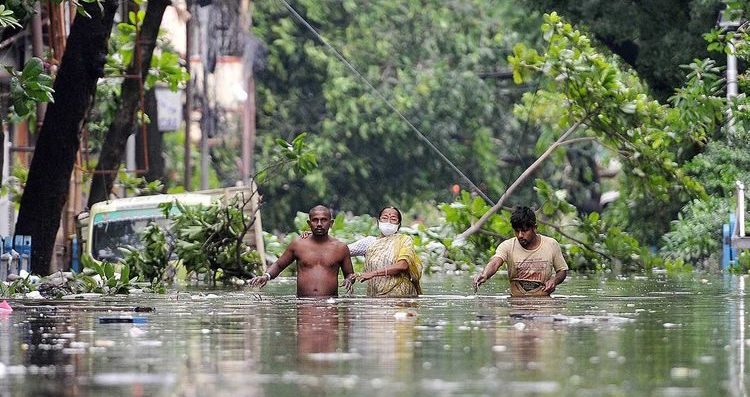 For those living in the South Asian peninsula, cyclone season is nothing new. Every year, seasonal winds shifting over the Indian Ocean contribute to the growth of tropical storms that batter the South and Southeast Asian coastline. On occasion, these storms grow exponentially in size and become “super cyclones,” bringing with them devastating havoc. Such has been the case with Cyclone Amphan.

After steadily gaining strength over the Bay of Bengal for days, on Wednesday afternoon Amphan made landfall over the northeastern coast of India, in the states of Odisha and West Bengal, and Bangladesh. The cyclone hit its peak velocity on Monday and earned a Category 5 classification from the Indian Meteorological Department. With heavy rains and winds exceeding 110 mph, Amphan has been able to unleash unprecedented devastation.

While officials say it will take a few days to take full stock of the situation, early reports paint a grim picture. In a press conference on Wednesday night, Mamata Banerjee, the Chief Minister of West Bengal, said that two districts were completely devastated by the storm, with homes levelled, power lines snapped, and crops destroyed. Videos across social media show power lines catching fire, plunging large parts of the region into darkness. According to early counts, over 72 people have died so far in West Bengal alone, while 10 more have died in Bangladesh. Many of them were crushed by falling trees, electrocuted by fallen power lines, or were crushed inside buildings that collapsed from the storm.

No one has faced worse destruction than the region’s working class and poor who’ve lost their homes and livelihoods. In towns and villages near the coast, their thatched houses were no match for the power of the storm. Tens of thousands of Kutcha homes (homes made with mud, straw, and leaves) have collapsed. The high winds and rain completely ripped apart their asbestos roofs, while the mud walls have washed away. Largely fishing and peasant communities, they’ve also suffered immense blows to their livelihoods with the destruction of boats, sea-walls, and crops.

For the thousands of migrant workers forced to return home due to the government’s enforced lockdown, this natural disaster further exacerbates the crisis brought about by the spread of the coronavirus. Having lost their jobs due to the lock-down, they are now left with little, with their homes and hometowns destroyed.

Though the region has been expecting the storm, the coronavirus pandemic complicated the evacuation process. The same day that Amphan made landfall, India reported its highest number of confirmed COVID-19 cases in a day, putting the national number at over 110,000. Almost three million people were evacuated from the region earlier in the week, but the evacuation was slow and arduous because of social distancing protocols that were firmly in place. Many people refused to be evacuated due to fears of contracting the coronavirus in the cramped quarters of the evacuation shelters.

The impact of Amphan, especially in the midst of a global pandemic, is far-reaching. According to Mamata Banerjee, districts that have been flattened by the storm have to be rebuilt from scratch. While officials continue to assess the extent of the damage, Banerjee has announced a meager monetary compensation for the families of those who’ve lost their lives in this cyclone.

Elsewhere, in a series of tweets, far-right Prime Minister Narendra Modi promised unconditional support to help combat this crisis. However, if the current coronavirus crisis is any indicator, much is left to be desired from this “support.” Just a few weeks ago, the Modi government unveiled plans for the “fourth phase” of India’s repressive coronavirus lockdown. The new Atmanirbhar Bharat Initiative (Self-Dependent India) was centered around prioritizing the opening of the economy over the lives and well being of people, even as India continues to report some of the lowest testing rates in the world. While the plan reports unprecedented public spending, most of it, in reality, consists of fiscal measures that are to be undertaken by the Reserve Bank of India and are completely independent of the Government of India’s spending. More importantly, any public spending is proposed to be funded by the privatization and sale of central public sector enterprises (CPSEs). This will not only increase inequality, as capitalists transform public utilities into profit-making enterprises, but will also especially hurt workers, who’ll consequently be left without labor protections.

While such measures are being, and will continue to be fought against by the working class, there has been far less resistance from political parties who claim to stand in opposition against the Narendra Modi-led government. Banerjee, who often boasts to be Modi’s biggest opponent, used the coronavirus crisis to embark upon a territorial fight with the central government. While politicians continue to rage petty wars among themselves for power and the capitalist class stands by to profit off of these disasters, the working class and the poor are left out to suffer amidst deepening inequality.

The recent cyclone has rendered hundreds of thousands of people homeless, without any safety net, and has left them susceptible to the ravages of the current pandemic. Although the region is no stranger to tropical storms, recent storms have been far more destructive due to climate change. With the rise in sea surface temperatures increasing their maximum potential energy, these storms are only going to grow more deadly in the future, rendering populations not just in South Asia, but across the Global South, vulnerable. A 2018 World Bank report estimates that, by 2050, there will be 143 million climate change-driven migrants from Latin America, sub-Saharan Africa, and southeast Asia alone.

As we’ve seen in the COVID-19 crisis, we can’t trust the bourgeois political regime or the capitalist class that props them up to take care of us. Instead of making the capitalist class pay for their part in fostering inequalities that now make any natural crisis more dire, the Modi-led government, like bourgeois governments across the world, has sought to pay for these crises by levying cuts to public utilities and austerity measures. Where governments across the world have failed, front-line workers have led the way, fighting for better conditions. Workers have shown that they can run their workplaces and communities better. Whether it is a global pandemic, or the ravages of climate change, we urgently need a political and economic system that is run by, and is at the service of, the working class — not capitalist interests.