In the Midst of the Pandemic and Protests, the U.S. Regime Looks to the Elections

Republicans and Democrats look to November while millions are facing the consequences of the pandemic, and the struggles against racism and coronavirus continue. 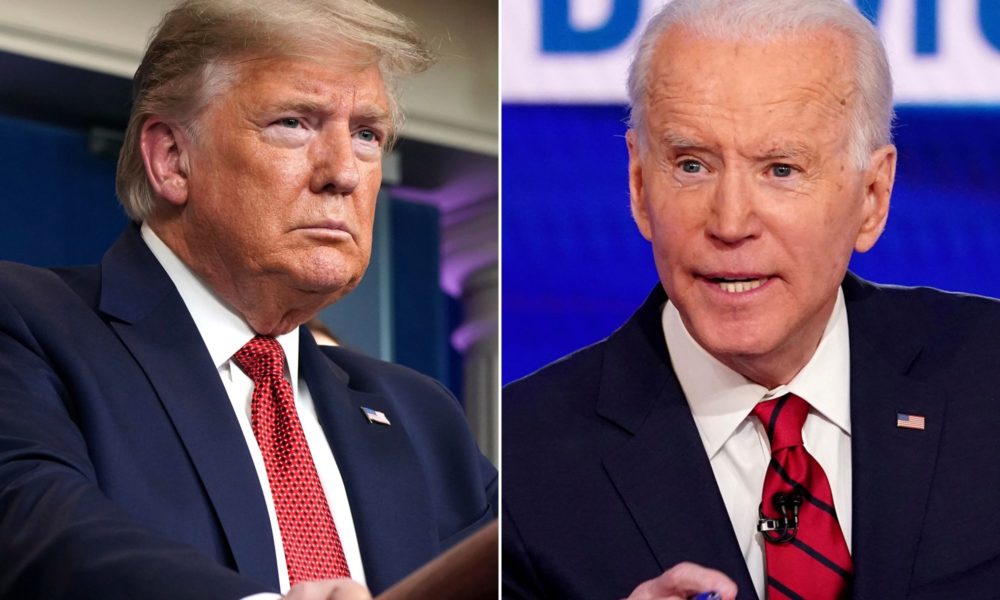 As the country still finds itself convulsed by the protests against racism and new records in the numbers of coronavirus infections, the mainstream media is trying to shift the discussion to the November presidential election. For Trump, it’s about desperately trying to recover some of the voters who decided not to support him again, especially because of his response to the pandemic and protests against police brutality.

The political crisis started by massive mobilizations represents a political change from which there is no return, and which is possibly the largest movement in American history. In this sense, the situation is not yet resolved, and the movement can continue to spread if there are evictions and if thousands of frontline workers continue to be exposed to the coronavirus. Black youth who came out to protest against racism and police brutality are among the people hardest hit by labor precarization and homelessness. The protests have also been supported by many health and education workers who are seeing firsthand the effects of the coronavirus crisis on their communities. Donald Trump and Joe Biden, the two capitalist candidates in the November election, do not reflect the demands of this movement, nor do they solve the healthcare and unemployment crises or social vulnerability that the pandemic is leaving.

Donald Trump: The General in his Labyrinth

Until earlier this year, Donald Trump was still widely supported as a result of the relatively stable economy, and had the approval of the majority of the GOP. The coronavirus crisis exposed how much of the Republican Party’s economic and health policy is aimed at benefiting large corporations. Thousands of protesters rebelled against the refusal to address police brutality and Trump’s pandemic denialism. He claims that a silent majority supports him and that a supposed radical left is trying to destabilize the United States. However, the numbers tell a different story. Polls show broad support for the demonstrations, and racism is the highest concern among Democratic voters and even one of the first among Republican voters, behind the economy and unemployment.

The polarization strategy that has been deployed has proved ineffective, with Democratic candidate Joe Biden leading the polls in swing states such as Arizona, Florida, Michigan, North Carolina, and Pennsylvania. About 15% of Trump voters in 2016 say they would not vote for him again, mainly because of his response to the coronavirus pandemic. Overall, 75% of Americans disapprove of the administration’s health response, and their policies on racial inequality.

The health crisis is so evident that Trump has publicly admitted that the pandemic is likely to get worse before improving, and made statements supporting wearing masks after months of denying their effectiveness and contradicting health advisors. Also, after strongly pushing to reopen schools, he is facing the reality of many states moving to online classes. The President was forced to say that schools in coronavirus hotspots should delay their reopenings. This challenges the normalcy that the government was trying to present, but also intends to discourage a rebellion among teachers. The slow and insufficient recognition of the pandemic is clearly an electoral move meant to shore up support for Trump before the November election.

Some media outlets point out that Republicans are trying to focus the campaign on economic proposals. However, this also presents a problem for the president, especially regarding one of his supposed accomplishments, the employment rate. Unemployment still exceeds 11% and contradicts Trump’s claims to have created more jobs than ever for African-Americans and Latinos, jobs which today, after millions of layoffs, have been shown to be utterly precarious and poorly paid. The economist Jack Rasmus has also pointed out that not just private jobs and small businesses are being affected by the coronavirus spread — budget cuts are also putting thousands of public sector employees at risk.

Trump’s own campaign manager in 2016, Brad Parscale, was the target of criticism after the failed first campaign event in Tulsa, and has now been removed although he stays on as a senior advisor. This indicates a possible shift in the Republican campaign. The polls show that Trump is behind Joe Biden between 15% or 5% in the most conservative screenings, so he would need to win over undecided and even Biden voters to have a chance in November. Outside of electoral calculations, the most important political change is that, even with far-right groups acting opposed to safe measures, this rhetoric of denialism is no longer supported by the majority of the population. Only the most extreme fanatical groups can now deny the severity of the coronavirus, with over 4 million reported cases.

With Trump’s fall in the polls and declining approval ratings, there is a resurgence of the “Never  Trumpers,” who are organizing primarily around Project Lincoln to encourage Republicans to vote for Joe Biden. The group is leading campaign funds and volunteers to erode Trump’s support. Trump is mainly losing support among women in suburban areas, whom he is now addressing by saying that Democrats want to end suburbs. The Never Trumpers do not represent a decisive political force, after four years of Trump having majority support in the party. But they do represent an attempt to keep this historic GOP crisis from destroying the party or negotiating with a future Biden´s government. There are even Republican leaders supposed to speak at the Democratic National Convention. This shows an attempt to build a political bourgeois consensus to manage the current crisis and indicates that Biden is more likely to address the demands of conservative voters than the voices in the streets. Trump is also trying to avoid criticism within the party by canceling portions of the Republican National Convention, which shows how deep the crisis of the GOP is after these four years.

The different institutions of the regime are distancing themselves from the administration as well in order to distance themselves around questions of police behavior. Senior army officials disagreed with using military force against protesters. The Supreme Court has created several setbacks for the president, such as the ruling in favor of DREAMers and against employment discrimination based on sexual orientation and gender identity — although the ruling to access his tax return allows him room for manoeuvre until November. Health experts have also long since abandoned their open support for Trump. These political realignments do not go hand-in-hand with pro-working-class policies, but seek to preserve the regime’s institutions at a time when American politics has moved “from the palace to the street.” The November election is an attempt to channel the discontent and direct action that made the United States the epicenter of both the coronavirus and class struggle into electoral politics.

Since the murder of George Floyd and the outbreak of rebellions against the police, the Democratic Party has acted to safeguard the institutional order and channel the rage against racism into the presidential election to remove Trump. Former President Obama is the main proponent of this strategy. Recently, he and Joe Biden released a video where they talked about the health crisis, racial inequality, and the failed politics of Trump, especially the attacks against Obamacare. However, they present police brutality as a crisis of dialogue, rather than questioning the basis of the penal system, qualified immunity, and mass incarceration that Democratic administrations support. In regards to the health system, they have claimed that Obamacare was a step forward but they do not present a proposal that attacks the big pharmaceutical companies that are profiting off people. Finally, the former President and Vice President talked about the need for an economic program to create jobs and help small businesses, but in the previous crisis in 2008 they stood on the side of the banks and Wall Street.

This role of the Democratic Party is also supported by Bernie Sanders. While Democratic governors and mayors have supported astronomical budgets for police and suppressed protests in their own cities, Sanders and the Squad closed ranks around the establishment’s candidate and, moreover, supported investing even more in police departments. Biden’s program does not include the main progressive demands such as Medicare for All, nor does it offer an answer to the demand of defunding or dismantling the police. Several city councils are voting for austerity budgets without reducing what is allocated to police departments, but protests continue, and the support for some progressive and leftist candidates has grown, demonstrating that left-wing ideas are increasingly appealing to the population.

The politics of the lesser evil is gaining strength among those affected by Trump’s disastrous policies, and also among sectors of activists. But the Democratic establishment is proposing a national alliance in which capitalist interests are not affected, which must be attacked in order to get out of this crisis. It is the stock market and the banks, represented by the party establishment, that have profited from the bailouts voted on by the Senate. It is the housing entrepreneurs who are benefiting from the real estate business that leaves millions of people who could be evicted in the most extreme vulnerability. It is the billionaires who run essential services who are putting the lives of millions of workers at risk.

The idea that Biden can be pressured more effectively than Trump also has support. However, the proposal to move the fight from the streets to the ballot box weakens this massive movement that has put pressure on the police. Meanwhile, Democratic administrations are cracking down on protesters, passing austerity budgets, and jailing and charging numerous activists. At the moment, the idea of defunding or abolishing the police does not have majority support, but that does not mean that it should not be part of a major campaign between the working class and the unions, together with a plan to fight against the reopening policies that are exacerbating the health crisis.

On the contrary, the self-organization of the millions of people who have mobilized, of the essential workers, of the black youth, of the unemployed, can effectively put an end to Trump’s policies if they build a strong united front and a plan of struggle leading to a general strike. These tasks are not simple and require overcoming the significant fragmentation of the working class, but a first step is to position ourselves with a policy independent of the capitalist parties and not to support those who have already pursued racist, imperialist policies and unloaded a crisis on the working class. The current struggles are not separate from the political struggle to build an alternative for the working class to fight against the pandemic, racism, and unemployment. This is a key moment to fight for such an alternative.