In Turkey, Seven Women Are On Trial for Playing “A Rapist in Your Way”

Seven women were arrested in Istanbul after performing the iconic dance “A Rapist in Your Way.” The state prosecutor is pushing for sentences of up to two years in prison. 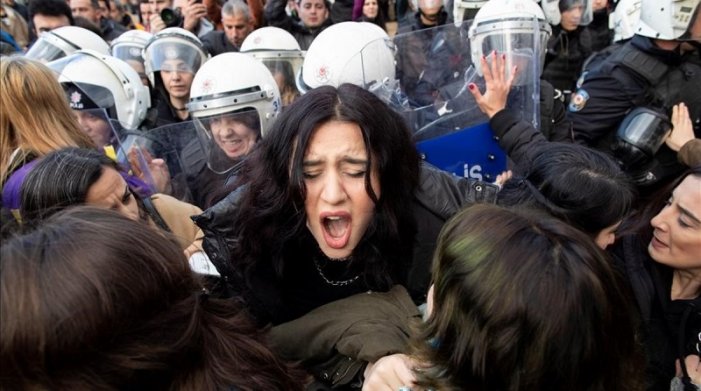 On Sunday, December 8, at least 300 women gathered in the neighborhood of Kadıköy in Turkey to perform “A Rapist in Your Way” (Un violador en tu camino). The renowned song, created by the Chilean collective Las Tesis, has been making waves across the globe as a feminist protest anthem. The song has made its way from Chile to nations like Mexico, Costa Rica, and the United States. The anthem highlights the sexual violence that many women are subject to by the cops, the state, and the government, especially in the context of the massive protests against president Piñera in Chile. Although all of these demonstrations across the world have been peaceful, the action in Kadikoy was nonetheless violently suppressed. The Turkish anti-riot police intervened to disperse the demonstrators, resulting in the arrest of seven activists. At least two of the detainees were severely beaten during the arrest.

According to the governor of Istanbul, the women were arrested because the song, which includes the expression, “they are the police, they are the judges, the president, the oppressor state is a rapist,” violated the law because it “insulted the president and degraded the institutions of the state.”

The Turkish Bar Association, on the other hand, came out in defense of the women, saying, “at a time when femicide is on the rise in our country, we condemn the intervention of the security forces against a peaceful protest. It is unacceptable that a dance that has become a symbol all over the world should be dispersed using violence against women.”

Esim Yesilirmak, one of the lawyers for the seven women, told BBC Turkey, “We did not expect such a thing. Ours was an act in protest at the murders of women all over the world. The lyrics do not refer to any specific president or institution.”  Another lawyer, Tuba Torum, said, ”the police also acted without respecting established procedures for dispersing demonstrations. They didn’t make the call three times, didn’t wait 15 minutes and pushed the demonstrators into the street.”

The office of the governor of Istanbul confirmed in a statement that the activists will be tried under Article 301 of the Turkish Penal Code which states that the public denunciation of the Turkish nation and its institutions can lead to a sentence of six months to two years in prison.

However, enormous protests that broke out in opposition to the activists’ arrests prompted the state to release the women.

The censorship of this peaceful protest is a sign of the extreme state repression and violence of the Turkish regime which does not allow the slightest freedom of expression or democratic freedoms for the masses to organize and protest.

Similar performances of the song across Turkey, such as those in Ankara and Istanbul, were also subject to fierce repression by the police. After a demonstration in the city of Izmir on December 15, warrants were put out for the arrests of at 25 women who participated; nine of them so far have been detained after being pulled from their homes.

Women in Turkey live in a climate of tension due to the huge number of cases of gender-based violence and widespread femicide by partners and ex-partners. According to a 2014 UN report, one in four women in Turkey is exposed to sexual or physical violence, but only one in 10 of them seeks help. According to several feminist associations, 440 women died from gender based violence in 2018 alone. The government, headed by Recep Tayyip Erdoğan, legitimizes and normalizes this violence against women, protecting those responsible by appeals to “the integrity of the family” and religious custom; however, it is the policies of Turkey’s capitalist democracy that is truly responsible for gender-based violence.

This is the second time this year that the Turkish government has used violence to silence the voices of the women’s rights movement. On March 8, thousands of protestors gathered in the center of Istanbul for International Women’s Day to condemn violence against women and the growing issue of femicide. President Erdogan responded with tear gas and rubber bullets.

The Union of Turkish Bar Associations condemned the detention of the activists and called on the authorities to fight “against sexist crimes and not against women.” With their actions, the women in Chile who first performed the song have highlighted the state’s role in the patriarchal order. The many performances that have broken out in solidarity across the world, like those in Turkey, show that women are rising up against state-sanctioned violence and that their fight is the same as that of the hundreds of thousands of people mobilizing across the world against bourgeois governments and capitalist oppression.

Lyrics of “A Rapist in Your Way”

Who judges us for being born

And our punishment is the violence you don’t see

Impunity for my killer

And it wasn’t my fault,

nor where I was,

nor how I dressed

You were the rapist

They are the police

Without worrying about the bandit

Your sweet and smiling policeman lover

keeps vigil while you sleep

You are the rapist