While Trump was in India visiting Prime Minister Narendra Modi to negotiate a lucrative arms deal, Modi’s followers unleashed a veritable hunt against Muslims, the likes of which has not been seen in decades. 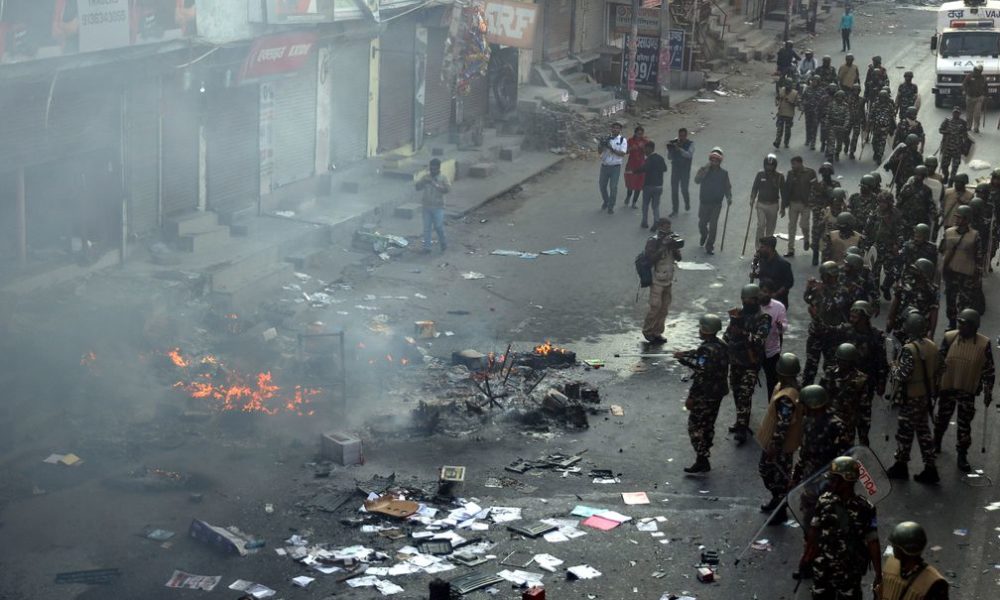 In an attempt to smooth over last year’s tariff escalation with Trump, Prime Minister Narendra Modi of India welcomed the U.S. president with a huge event in a stadium with more than 100,000 people. “Relations with India have never been better,” Trump said at a press conference Tuesday morning. There, he avoided referring to the demonstrations and the killings that are currently engulfing the country. In return, Trump was rewarded with several cooperation agreements upon his departure and a contract to advance the sale of U.S. helicopters and military equipment to India that is worth about $3 billion.

Tensions are high in northeast New Delhi where Modi’s right-wing Hindu followers have been terrorizing Muslims, unloosing violence the likes of which has not been seen for decades. In just the last two days, in the midst of Trump’s visit, at least 27 people have been killed and more than 200 injured, mostly by gunshots. Mobs have set neighborhoods on fire, particularly those with large sectors of the Muslim working class and poor. These attacks come after months of sustained protests against the government-sponsored Citizenship Amendment Act–a law that provides non-Muslim refugees from Pakistan, Bangladesh, and Afghanistan with a path to citizenship while leaving millions of undocumented Muslims vulnerable to detention or deportation.

Modi won his second term last year on a strong nationalist, anti-Pakistan, and anti-Muslim discourse. In the midst of an economy that shows no signs of growth and high unemployment that has generated massive protests and workers’ strikes, Modi used xenophobia as a weapon to win over the Hindu vote and to avoid blame for the country’s dismal economic state.

After his electoral victory, Modi has maintained this same rhetoric and slate of policies during his second term in office. In less than a year, he has escalated tensions in Kashmir, the only Muslim-majority state, by stripping it of its special protections, and has passed a new citizenship law that’s set to disenfranchise millions of Muslims in the country.

The violence broke out last weekend when a group of protesters blocked the main road in the Jaffrabad neighborhood of New Delhi to protest the xenophobic citizenship law. This action was a part of protests that have been ongoing for several months.

Supporters of Modi and members of his Hindu nationalist Bharatiya Janata Party (BJP), organized a counter-demonstration in favor of the law. Unsurprisingly, the police were on the side of the right-wing counter-protesters, attacking Muslims specifically and injuring hundreds of people. The inhabitants of Jaffrabad accused the ruling party and the nationalist and xenophobic group Rashtriya Swayamsevak Sangh (RSS)–which is represented politically by the BJP–of organizing a massacre against Muslims.

In a completely cynical statement, Modi took to Twitter on Wednesday to call on “my brothers and sisters in Delhi to keep the peace.” Meanwhile, the violence continues. For his part, Donald Trump avoided talking about the issue through his 36-hour tour, although he did take advantage of a press conference to attack Venezuela again and announce new sanctions against the Latin American country.

It is not the first time that Modi has incited violence against the Muslim minority in India. When he was head of government of the state of Gujarat in 2002, he was responsible for unleashing a pogrom that slaughtered over a thousand Muslims. This is the first time since 1984, however, that such an attack has taken place in the country’s capital.

Everything indicates that the inflammatory politics practiced by Modi has given him the opportunity to avoid addressing the real crisis that the country is going through, which has sent the economy into a downward spiral and made the lives of the working class and poor increasingly precarious; now many of their lives are in imminent danger as Modi authorizes right-wing attacks against anyone who does not fit the BJP’s vision of a Hindu nationalist state.