Alejandro Vilca is an indigenous socialist who recently won a seat in the state legislature in Argentina. What politics does he propose? 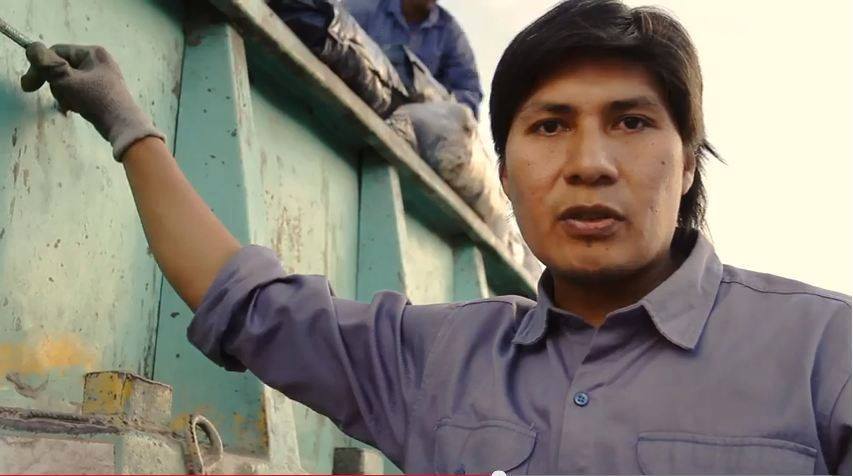 Alejandro Vilca doesn’t look like the other members of the state legislature in Jujuy, a province in the North of Argentina. Of indigenous descent, he stands out amongst the European looking Argentine city council members.

Most importantly, Vilca doesn’t have the same kind of politics as the other candidates in the state legislature. In the most recent elections, the right wing party Frente Renovador won 60% of the vote in Jujuy, one of the one of the poorest province in Argentina. Vilca is a socialist, who has been a member of the Party of Socialist Workers for 20 years. His campaign centered around the fight for the six-hour work day with no reduction in wages, as well as the demand that every politician receive the same salary as a teacher. As a member of the state legislature, he, like the rest of the Party of Socialist Workers (Partido de Trabajadores Socialistas, or PTS), will get the same pay as a teacher and donate the rest to workers’ struggles. He believes in revolution and fights for a government in the hands of the working class.

Alejandro Vilca, who has absolutely nothing in common with your run of the mill politician, came in third in the midterm elections last week, missing the second spot by a little more than 1% of the vote. He won 18% percent of the vote, an unprecedented number for a revolutionary of indigenous descent.

Vilca is part of the Left and Workers Front (Frente de Izquierda y Trabajadores, or FIT), an electoral coalition of three Trotskyist parties in Argentina: the Party of Socialist Workers, the Workers’ Party, and the Socialist Left. More than 1.2 million people in Argentina cast their ballots for the FIT last week in Argentina’s midterm elections. In Jujuy, the FIT won 4 seats in the state legislature and 5 in city councils. This is all the more remarkable given that the elections marked the rise of the right wing and the fall of Kirshner’s pink tide government.

Read more about the elections here.

The Patient Organizing of an Indigenous Trotskyist

Vilca grew up in Jujuy, Argentina in a working class neighborhood. His mother raised five kids on her own by working as a maid, always struggling to make ends meet. With great effort, Vilca made it to college.

He became a militant of the PTS when he was in college, fighting against a right-wing educational reform law. He has spent the last 20 years as a socialist militant in his hometown of Jujuy, working to build a revolutionary and working-class alternative there.

Vilca’s path to becoming a garbage collector has everything to do with his organizing. At first, he was subcontracted by the state and helped organize subcontracted state workers in Health, Education, and other state departments. He was blacklisted as a result of his organizing, so he and a group of activists were transferred to garbage collection in Barrio Alto — the Siberia of subcontracted work. But Vilca did not stop organizing. There, he organized against subcontracting, and finally, in 2014, he and his co-workers won the right to full workers rights and contracts from the state.

Vilca says, “I’m a garbage worker who lives in Alto Comedero, a very poor part of town. That has a big impact because here most of the candidates are businessmen. So I think that by putting up a candidate who makes a living picking up trash, our campaign generated a lot of sympathy and expectations.”

Vilca talks about having the support of the workers, the women, and the youth in Jujuy. His success is not due to a stroke of luck but due to patient sowing of years of militant work. His is the patience of a Kolla (indigenous group) and of a Trotskyist. “I claim my Kolla descent, but I am a garbage worker and a militant of the Party of Socialist Workers,” Vilca says.

Jujuy is well known as a capital of exploitation and political persecution. Just recently, the state witnessed the illegal detention of activist Milagro Sala. There is also a history of persecution of union leaders, as well as a history the government bringing criminal charges against activists, evicting street vendors, and repressing youth in poor neighborhoods. 42% of the people in Jujuy live in poverty. 50% of workers are subcontracted. The consciousness of this very poor state is not very developed. This explains in part why the right wing party won over 60% of the vote in the recent elections and managed to secure two of the three seats in Congress representing Jujuy.

Vilca was a candidate in 2013 and 2015, when he missed winning a seat on the city council by just 1,000 votes. Gaston Remy, an economist and teacher who ran on the same ticket as Vilca says, “At this point, we have built a base of support. Our voters are increasingly aware that they are supporting an anti-capitalist project that fights for a workers’ government. This is also something that annoys the powerful, who consider that workers always have to vote for their exploiters- for business politicians.”

Yet, this year, even more people joined the campaign for Vilca. There were hundreds of volunteers in the small town. Vilca says, “This demonstrates that there is enthusiasm in the working class, that it’s possible to take on the powerful sectors of society. So this is a historic outcome in an election that fills the working class, which puts up a fight every day, with enthusiasm.”

In the primary elections, Vilca came in second place, beating the Peronist candidate– a first time for the left in an election. He got 12% of the vote. In the most recent elections, Vilca received even more votes: a total of 18%.

A vote for the working class, a vote for women’s rights

It is true that a vote for Vilca won’t change Argentina, and it is also true that propelling Vilca into Congress won’t bring about a workers’ government. The parties of the FIT have no illusions that you can elect your way to socialism. However, a vote for Vilca does mean breaking with the caste of businessmen who run as politicians. A vote for Vilca means recognizing on some level that the capitalists and the workers don’t have the same interests; it is a measure of class consciousness.

However, it is not only the issue of class that draws workers and young people to the FIT. Vilca, along with the candidates of the FIT, speak out for women’s rights. With the massive NiUnaMenos movement that brought thousands into the streets against femicide, putting women’s issues on the agenda is not uncommon for politicians. What is uncommon is the concrete proposals put forward by Vilca and the rest of the FIT candidates. Vilca says, “Jujuy has one of the highest per capita femicide rates in the country. So far this year at least 8 women have been murdered. During the campaign, along with members of Pan y Rosas, we put forward a National Emergency Plan against violence against women. This has been supported by thousands of women. While other parties opportunistically claim to support women’s rights, our policy to win full rights for women is based on a strategy of unifying workers to fight for women’s rights from an anti-capitalist and socialist perspective.”

It is the struggle for the rights of the most exploited and oppressed that draws people to Vilca and to the FIT. He says, “The contrast with our candidates is enormous, not only because of [my] indigenous ancestry, but also because of the class character of our working class candidates. Everyone sees us as ‘one of their own.’ This ethnic and class identity of the FIT support has strengthened people’s understanding that there is a need to have working class people in political posts who are also at every roadblock, who face the repression side by side with the workers… Many young people and women also feel connected to our ideas because they see that the left is putting forth a future that is worth fighting for.”

Based on an article by Paula Varela published in Ideas de Izquierda.