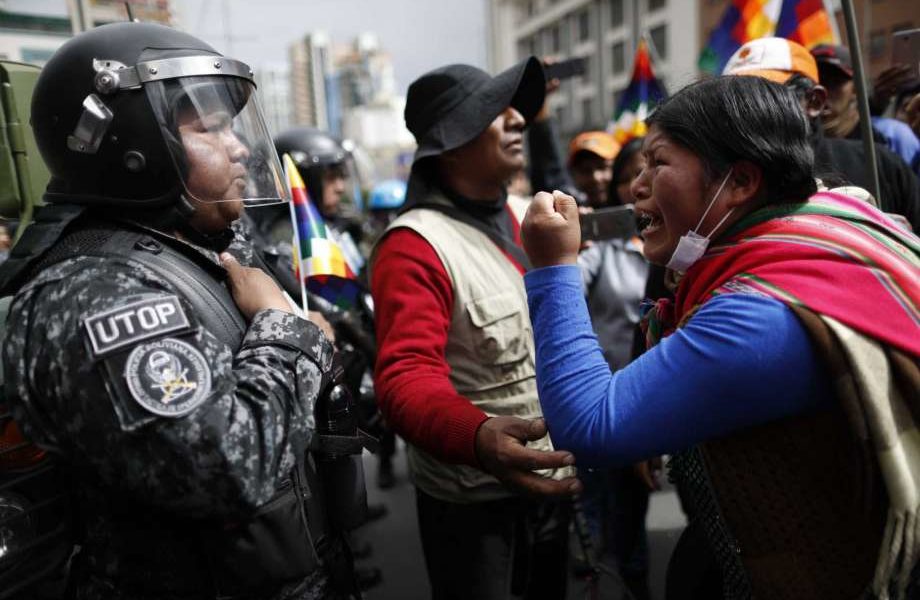 After weeks of increasing right-wing protests, the Bolivian military demanded on Sunday that President Evo Morales resign. The protests had reached a fever pitch, with the police joining the side of the right-wing in the streets demanding the president’s ouster.

After the police, the military and the Organization of American States (OAS) united against Morales, he resigned. Shortly thereafter, his house was ransacked, and Morales went into hiding. President Trump along with other right-wing leaders tweeted his support for the ouster. The bourgeoisie of the eastern city of Santa Cruz (the richest sector of the country, linked to agribusiness), among the right-wing opposition and Catholic Church, celebrated Morales’ resignation.

Protesters burned indigenous flags. Policemen cut the indigenous symbol off their uniform holding Bibles and claiming to defend “democracy.” The coup leaders Fernando Camacho and Carlos Mesa started a furious political persecution against the MAS party and the workers and indigenous people who rejected the coup. They burned their homes, detained people and brutally repressed the anti-coup demonstrations.

We should make no mistake: This is a coup organized by the Bolivian capitalists, agribusiness, the church and the armed forces. It is supported by U.S. imperialist interests organized in the OAS, and it has a deeply racist, homophobic, anti-worker and anti-indigenous perspective. Trump is using it to threaten Cuba and Venezuela;after the failed coup of Venezuela’s Juan Guaidó, U.S. imperialism is trying to support a puppet government to support its interests.

Morales has since fled the country, having been offered exile in Mexico. On Tuesday night, despite not having quorum in Congress, right-wing leader Jeanine Áñez proclaimed herself president of Bolivia. She walked to Congress holding an oversized Bible over her head, declaring, “The Bible will come back to the presidential palace.”

In the midst of this crisis, there is strong resistance on the ground in the city of El Alto, on the outskirts of La Paz. This area, which has a strong working-class mainly of Aymara origin, is organized in neighborhood councils that played a key role in ousting the noeoliberal government of Gonzalo Sánchez de Lozada in 2003, and also confronting the failed coup against Morales in 2008. Now El Alto is on the front line again.

The day after the coup, Bolivians spontaneously came to the streets chanting “Now it’s time for civil war” and “Camacho, Mesa, we want your heads”—referring to the ultra-right-wing leaders of the coup. They set fire to a police station and burned the police in effigy in the streets, causing the police to retreat. They blocked highways and roads, closing schools and businesses. They rejected the racism and misogyny showed by the coupists against the wiphala (an indigenous flag) and “the women who wear the pollera,” in reference to the Andean traditional skirt worn by cholas (Aymara women). They suffer not only coup violence but also the structural racism of the Bolivian bourgeoisie.

They built assemblies to discuss next steps and self-defense. Indeed, the assembly concluded that it was necessary to “form self-defense committees, blockades, permanent and forceful mobilization.” As one protester said, “The police will no longer be in El Alto. We will take care of security within the community.” The Federación de Juntas Vecinales (Fejuve), the neighborhood organization that leads the protests, issued a statement calling for daily mobilizations. They demanded that the leaders of the coup abandon their posts within 48 hours and called on the military and government to obey the law. If they don’t, the Fejuve said, they will form “a Trade Union-Civilian Police Force” to resist the coup leaders’ violence and persecution.

These indigenous workers face harsh repression: tear gas and rubber bullets. There are images of children being carried to safety after protests, badly injured by the police and of indigenous people on the ground being kicked by the cops.

Faced with this resistance, the chief of the armed forces called for joint operations with the police in the places where the demonstrations are taking place. That is to say, a hardening of the repressive operations in the region of El Alto. But they still could not suffocate the resistance, and on Wednesday, the population of El Alto marched to La Paz (the seat of government) and held a massive cabildo (popular assembly) to reject the self-proclaimed president and continue the struggle until the coup falls.

A Rebellion in El Alto Is No Small Thing

El Alto is the largest city in Bolivia, with almost a million residents. It is a primarily indigenous city full of displaced peasants who come to work in the city. They have been the epicenter of radical resistance in the past, such as in 2003, when the neighborhood played a central role in overthrowing Sánchez de Lozada. Indeed, El Alto occupies a strategic position in Bolivia—all the major highways go through it, which means they can be blocked. The airport is also located there, as well as several gasoline plants.

In addition to playing a role in the overthrow of Lozada, El Alto has been central in other struggles, such as the struggle against privatization and multinational companies. Because of this combative history, a rebellion in El Alto is no small thing.

These neighborhoods tend to be sympathetic to Evo Morales—in fact it is because of their huge struggle in 2003 that Bolivia elected Morales as its first indigenous president. Morales integrated many of the leaders of the movement in El Alto into the government, and the movements have become increasingly co-opted—making excuses for and keeping people from struggling against Morales’ austerity policies and repression of the working class.

Despite this, there exists a small workers’ vanguard with independent unions and a sector of indigenous people among whom Morales lost support for his environmental policies. But, this loss of support doesn’t mean siding with the right. In El Alto, people have also protested Morales’ austerity policies, most notably in 2010 when he increased the price of gas. Some even participated in the initial mobilizations against the election results starting on October 20.

And the indigenous activists are clear on what they are fighting. As an indigenous woman in El Alto said, “The right wing that is in Santa Cruz is taking our territory and our riches. That’s why they want to humiliate us and step on us, as if they were the only citizens…. We say no more to being stepped on and humiliated by the transnational companies who have always stepped on us and humiliated us.”

Another woman says, “They have always killed us in the name of the Bible. The Spanish who showed up with their Bible and their sword. Now they want to kill us again, and we won’t allow it.”

In the meantime, the right-wing is grabbing power. While they put on the facade of defending democracy until Morales was ousted, they have now shed that facade. Áñez, an ultra-religious right-wing leader of Congress, proclaimed herself interim president in a half-empty Congress. The Constitution says that votes can take place only with quorum. Áñez and the coup-plotters discarded that pesky detail and declared her president.

And just as the indigenous people in El Alto have begun a combative struggle against the coup, Morales left the country. As Bolivian socialists write in La Izquierda Diario, “The decision of Evo Morales to travel at this moment implies, objectively, to weaken that resistance to the coup.”

And it has been weakened further by Morales’ own rhetoric. Rather than encouraging the resistance, he tweeted, “I ask my people with great care to respect the peace and not fall into the violence of groups that seek to destroy the rule of law. We cannot fight among Bolivian brothers. I make an urgent call to resolve all differences with dialogue and discussion.”

This is a continuation of the Morales’ politics during the entire process of the right-wing coup: He sought dialogue with those who wanted to overthrow him. He urged patience and faith in the imperialist Organization of American States. And finally, he did not seek and encourage the mobilization of his indigenous base, or of the labor unions that are run by his own political party. The right-wing has done the exact opposite, going on the offensive in the streets, demanding the president’s overthrow—which they eventually won this week.

Morales came to power in 2006, expressing the enormous social rejection of the neoliberal policies implemented in Bolivia. Once in power, however, he co-opted and nationalized the mass organizations. This weakened their capacity for resistance and disarmed them in the face of possible attacks from the right. The right-wing maintained its economic, political and social power, in accordance with the agreements reached with the Morales government in 2008.

As Violeta Tamayo, a revolutionary socialist in Bolivia writes, “Far from socialism, Evo Morales encouraged capitalist profits and strengthened the right and the businesses who for years have been great friends of Evo. He attacked and violated the self-determination of the indigenous people, as well as attacking the student movement. I have been arrested three times under the MAS government for mobilizing.” Thus, the Morales government was not able to fight back against the rise of the extreme right which will create worse conditions for indigenous people, students and the working class.

Where Is This Going?

The emboldened far-right is trying to consolidate the coup by repression of El Alto with the support of imperialist powers. Far from upholding democracy, as they claim, they are attacking Morales’supporters and left activists, indigenous and working-class people. We have already seen right-wing attacks—including dragging a MAS party mayor through the streets, dousing her with red paint and cutting her hair. Now the anti-coup demonstrators say that the armed forces have killed and wounded protesters, and detained several of them.

The right-wing is trying to bring back the most retrograde, patriarchal and homophobic church to the center of Bolivian politics: The Catholic Church of the colonizers who committed genocide against indigenous people and continue to hate them.

They want a country run by agro-business interests, seeking to further plunder Bolivian lands and hyper-exploit the environment for their profit to the detriment of the native population of these lands. They want a government at the beck and call of the United States and their interests—opening the country to multinational corporations from the United States to plunder its labor and its resources. In fact, the imperialist governments of Donald Trump and Boris Johnson, as well as Jair Bolsonaro, have recognized Áñez as president of Bolivia.

This is what makes the protests in El Alto so important: It points toward a way to defeat the right wing, as the people of El Alto already did in 2003. Worker, indigenous and peasant self-organization and self-defense can defeat the right-wing coup and open the door to discuss an independent way out for the working class and popular sectors of Bolivia. We have to surround the resistance of the heroic people of Bolivia with the broadest international solidarity—down with the coup! For the triumph of the working class and the indigenous people against the far right!