Initial Conclusions of the Militarized Elections

(Picture: AFP) Soldiers and police in the streets, protest and electoral boycott, repression and political prisoners. Peña Nieto’s slogan of “democratic peace” and the brutal democracy of the PRI-PAN-PRD. Spanish version from La Izquierda Diario Protests against the elections This was the most significant operation carried out to protect the electoral process in recent history, […] 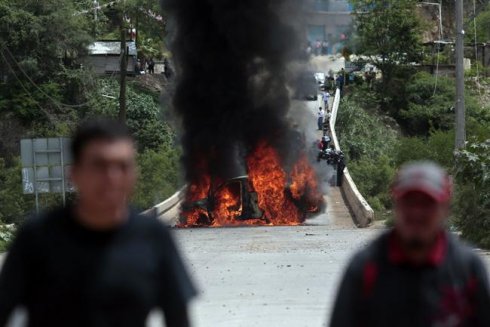 (Picture: AFP) Soldiers and police in the streets, protest and electoral boycott, repression and political prisoners. Peña Nieto’s slogan of “democratic peace” and the brutal democracy of the PRI-PAN-PRD.

Protests against the elections

This was the most significant operation carried out to protect the electoral process in recent history, with the backing of the National Electoral Institute and the Congressional parties. Even though the government’s central concern was to protect the elections in the so-called “red focal points” (Chiapas, Oaxaca, Michoacán, Guerrero Veracruz), it was extended to the rest of the country.

The overall objective was to contain the protests that, since last Monday, have been growing. The teachers and other sectors have played a leading role in organizing the protests, creating an unstable political climate that could threaten the electoral process. This was preceded by acts of aggression and persecution against activists – as was seen in Puebla and Veracruz – as well as state repression against the teachers, as was seen in Guerrero.

In order to confront all of this, Peña Nieto sent thousands of military and police into the streets, demonstrating that this degraded democracy is only able to guarantee its “democratic peace” through the use of military force.

Despite the conditions, throughout the day there were important protests. Confrontations were reported in different areas in Oaxaca, Chiapas, and Guerrero, as well as in Mexico City, the state of Mexico, Morales, and Guadalajara. The State responded to the actions by repressing the protestors, resulting in a significant number of injuries and hundreds of political prisoners in Oaxaca and other areas, such as Talapa, Guerrero, where a student died due to the police and military repression. These actions were primarily lead by organized sectors such as the teachers and political and social organizations. The government and the repressive actions were able to contain the protests and prevent them from changing the general course of the elections– to which tens of thousands of people attended. The government was also able to prevent the protests from impeding the installation of the election booths in any of the states. But, at the same time, the elections took on an atmosphere far from the “democratic peace” that Peña Nieto wanted to create, and resulted in the expression of nationwide political instability.

In the backdrop of all of this is the general loss of credibility in the so-called democratic institutions. The elements of political instability that have surfaced in the past few weeks demonstrate that that the continuation of a wide sectors of the population’s display of discontent with this political regime could result in a new wave of protests and mobilizations in the next few months.

These elections decided the outcome of 9 congressional seats, seats in the senate and congress as well as a number of state and local positions.

At the closing of the publication of this article the numbers from the “Preliminary Electoral Results Program” continue to come in. However, it’s possible to make initial conclusions with the numbers that are not yet definitive. In the area of federal elections, the PRI appears to be the winner with around 30% of the votes and the PAN has around 22%, while the PRD didn’t pass 12%. These percentages are lower than what was reported by the election surveys and lower than the votes from 2012 (when the PRI ran along with the Green Party and received over 38%). In the case of the PRI, the coalition with the Greens (who won around 7%), and their ability to take advantage of the PAN and PRD’s loss in popularity, resulted in obtaining the first minority in the House with the potential to win the simple majority.

The most significant information resulting from the elections is PRD’s enormous drop in popularity, signifying that their parliamentary presence will very likely be reduced to half, and the rise of Andrés Manuel López Obrador’s MORENA as the fourth most voted party with 9%. In turn, this is creating a certain reconfiguration of the parliamentary map (including other political parties, such as Movimiento Ciudadano with 7%). It’s also important to consider that there is over 52% abstention and the spoiled or illegitimate votes are around 5-6%.

On the one hand, the elections express a wide sector of the population’s general lack of confidence in the traditional parties. This is, without a doubt, a result of the corrosion of the institutions that only escalated after October 2014 with the Ayotzinapa crisis. This hit the PRD particularly hard, as an accomplice and part of the Mexico Pact[1] along with PRI and PAN and, in the eyes of millions, involved in the “narcopolítica” (politicians with ties to the drug cartels).

At the same time, the elections express the limitations of the recent political dynamic in which the Ayotzinapa movement pulled back while the Congressional parties put forward elections with the aim of regaining the confidence of the general population. This explains why we haven’t seen an electoral downfall and it also explains the institutional weight carried by the PRI and PAN, who hold the majority of the congressional seats.

In the case of the PRD, the results of the elections express the limitations in their role as the opposition to the PRI and PAN. The PRD made a clear shift to the right, openly joining with PRI-PAN, resulting in the loss of the support of a wide sector of the population that had supported the PRD in the past considering them the opposition to the PRI and PAN. This shift in the PRD that began with the Mexico Pact and Ayotzinapa is more than just an element of the political landscape, it also has important consequences for the political regime. The PRD has been the “leftwing party” that has provided the regime with political stability in the last 25 years by containing the workers, youth, and popular sectors.

On the other hand, there are strong indications of a crisis surrounding the legitimacy of the institutions. The high percentage of abstentions, even if it’s typical of midterm elections and isn’t much more than the numbers seen in the 2009 elections, cannot be disconnected from the fact that there has been a growing movement condemning the elections taking place over the past few months. Along with the abstentions, the call for the spoiled or illegitimate vote, put forward by MTS (Socialist Workers’ Movement), reached 5.5% at the closing of this publication, which is close to the percentage reached in 2009 when there was an important campaign for a spoiled or illegitimate vote. Thus, these elections express a rejection of the electoral trap and put forward the need for a political perspective that will fight against the political regime.

The votes for independent candidates who presented themselves as “alternatives” to PRI, PAN and PRD- despite their actual politics- expresses the lack of confidence in the traditional parties throughout Mexico, including in the most conservative areas and states of Mexico. One case that stands out is Jaime “Bronco” Rodríguez, ex-PRI party candidate’s, victory in the race for Governor of Nuevo León. Rodriguez had a 17% lead over the PRI candidate, making him the first independent Governor in one of the key states – both economically and politically – in the north of the country. Nuevo León is closely linked to the United States and is home to a powerful fraction of the bourgeois.

MORENA’s electoral rise in popularity and its standing as the fourth most voted party presents a new element to the political situation. At the closing of this publication, the number of seats that they won in Mexico City and the weight they will carry in the political center of the country is still up for debate. Their rise in popularity is also an expression of the crisis affecting the parties that are the pillars of this democracy for the rich; wide sectors of people who once supported the PRD are now abandoning them to give their support to Andrés Manuel López Obrador, who they view as the opposition.

As we have been doing from La Izquierda Diario it will be of the utmost importance to present the argument to the thousands of youth and workers who supported MORENA on June 7 that expresses the kind of politics that we need in order to achieve the aspirations of the working-class and youth as well as how to take on the government and political regime’s attacks. At the same time we need to call for a wide mobilization – confiding only in the force of the combative workers and youth- to defeat the regime’s plans against the working class.

Preparing the struggle against the government and the brutal regime

Despite Peña Nieto and the Congressional parties’ intentions, elections marked with repression and disrepute, cannot put an end to the crisis sparked by the disappearance of the students from Ayotzinapa and the expression of the continued lack of confidence and loss of credibility in the institutions and its parties. But the PRI government- with its institutional weight and its political agreements with the PAN and PRD- will attempt to develop new attacks against the working class. The repression and militarization on June 7 shows what they are planning. Therefore, we must, once again, take up the path of struggle and mobilizations against this brutal democracy. From the Socialist Workers Movement (MTS) we are calling to bring together our contempt for the repression this June 10 from the Normal de Maestros to the central square (el Zócolo) in Mexico City.

[1] The Pacto por México is an agreement inked by Mexico’s three main political parties on December 2, 2012—a day after President Enrique Peña Nieto’s inauguration. The pact consists of 95 initiatives agreed upon by the governing Institutional Revolutionary Party (PRI), the National Action Party (PAN), and the Party of the Democratic Revolution (PRD).