Hundreds of organizations, intellectuals, and public figures from different countries have signed this declaration in support of the Workers Left Front—Unity (FIT-U) in Argentina for the upcoming national elections on October 27. 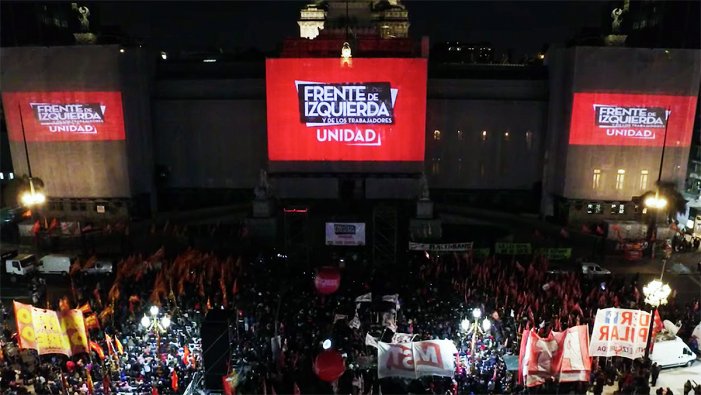 International Organizations, Intellectuals, and Public Figures from Different Countries in Support of the FIT-Unidad in Argentina

The signatories of this declaration are intellectuals, and public figures of the labor, youth, democratic rights, women’s, and LGBTQ+ movements, and militants of the left from around the world who fight the governments of capital, banks, and landowners, as well as imperialist aggressions.

We wish to publicly express our support for the program and the candidates of the Workers Left Front—Unity (Frente de Izquierda y los Trabajadores—Unidad), and to advocate a vote for the FIT-Unidad, the only socialist and working-class political alternative that will face the bosses’ parties in the upcoming elections of October 27 in Argentina.

The categorical defeat suffered by the Macri government in the primary elections of August 11 expressed the opposition of the majority of working people to the austerity plan that was imposed by the government and the IMF, and supported by Donald Trump. The elections, however, have given the victory to Alberto Fernández of the Front of All (Frente de Todos), a coalition that unites various wings of Peronism, including deputies, senators, and governors who supported Macri’s government these past four years. This coalition also includes the union bureaucracy of the CGT and the CTAs, who guaranteed the “social peace” that the government and the employers needed to carry out the austerity plan. After the defeat of Macri—the preferred candidate of imperialism, the markets and the IMF—the crisis has taken a leap with new devaluations and currency runs that aggravate the miserable conditions of working people, while facilitating capital flight.

The Macri government is over, but it has left behind a crisis and a fraudulent and illegitimate debt that deepens the country’s subjugation to international financial capital. Fernández, who is preparing to be the next president, has already pledged to pay that debt, which means imposing greater austerity on workers and the people. He is also preparing a “social pact” with the national bourgeoisie and the union bureaucracy that aims to gag and manipulate the labor movement so that working people end up paying for the crisis.

Almost two decades into the new millennium, the imperialist capitalist system is in crisis, exhibiting its decay in both the imperialist countries and the colonies and semi-colonies. In many of these countries there is now strong social polarization, exacerbated by an imperialist economic counteroffensive that has attacked the living conditions of hundreds of millions of working people on all continents. This has provoked an important response in the form of struggles by workers, women, and youth. As a result of the crisis of the traditional parties and as a counterpart to these responses by the people, far-right, xenophobic, and racist parties have resurfaced.

Under the Trump presidency, the United States has redoubled its offensive in Latin America, allying itself with local right-wing governments such as Macri’s in Argentina or Bolsonaro’s in Brazil. This orientation, however, is limited by the balance of social forces in this region of the world.

Ten years after the world capitalist crisis erupted in 2007-8, we are on the eve of a new international recession. The living conditions of large sectors of the population continue to deteriorate, while wealth becomes more and more concentrated among a handful of rich people. This phenomenon accelerates the tendencies both toward the intensification of imperialist aggression and toward inter-imperialist conflict.

To overcome its crisis and increase the profits of large multinational corporations, the capitalist system attacks labor and democratic rights, encourages ethnic and religious massacres, carries out armed interventions, imperialist wars, and national oppression, perpetuates the destruction of the environment, and places sexist, homophobic, nationalist, religious, and authoritarian leaders in power. Ideas about the “victory of the market and neoliberalism and the end of history and the class struggle”—declared as indisputable after the collapse of the USSR in 1989-91—were swept away by the crisis of 2007-8. Today, more than 10 years after that crisis, the capitalists are leading us rapidly toward a new catastrophe.

The Arab Spring, uprisings such as those in Algeria and Sudan, the emergence of the yellow vests in France, and more recently the mass mobilizations in Puerto Rico that overthrew the Roselló government—these are signs that the class struggle will expand and be tougher in the coming period. In the political arena, the fact that a majority of young people in the United States have a positive view of socialism is a sign of the coming times. In these battles, workers, the exploited, the combative youth, and the women’s movement will also have to confront the bureaucratic and reformist leaderships that collaborate with the bosses and capitalist states.

Given the consequences of the 2008 crisis and the collapse of the parties that have served as agents of neoliberalism, political parties have emerged to the left of traditional social democracy, such as Syriza in Greece or Podemos in the Spanish State. Although at the beginning they reflected the outrage and radicalization of mass sectors, they fostered the illusion that there was a solution for workers within the framework of the capitalist state. But that illusion did not last long. Syriza promised to form an anti-austerity government and ended up implementing the Troika’s plans, and that is why it ended up clearing a path for the return of the right. Podemos in the Spanish State, for its part, is negotiating about participating in a government alongside the PSOE. The failure of these center-left forces is framed by the more general failure of the member states of the European Union to offer a progressive solution to the working masses of the old continent. For this reason, the strategic fight for the socialist unity of Europe acquires a new relevance.

Nor have the Latin American governments of the pink tide turned out to be a solution for workers. The so-called “socialism of the 21st century” of Chávez and Maduro, or the governments of Lula and Dilma, the Kirchners, Evo Morales, and Correa—all of these have revealed their inability to unite Latin America, emancipate the countries of the continent from the imperialist yoke, and develop the productive forces of their respective countries. In opposition to their politics of class collaboration, we call for the working class to struggle against capital and its states, and fight for the socialist unification of Latin America. That is why, more than ever, it is necessary to strengthen an anti-capitalist, working-class, and socialist alternative of the left—one that fights for the political independence of the working class, for the unity of all the exploited and oppressed of the continent and of the world in the struggle against capital, and for workers’ governments.

The unity represented by the FIT-Unidad is a promising and positive development that strengthens the perspective of an independent solution to the crisis. The program of the FIT-Unidad calls for the nonpayment of the debt, a break with the IMF, the nationalization of banking and foreign trade—so that the capitalists and bankers pay for the crisis—and the fight for a workers’ and socialist government. The FIT-Unidad has not limited itself to intervening in electoral struggles, now mostly dominated by bourgeois parties, but it is actively supporting the organization of employed and unemployed workers against the war plan of the capitalists and their governments. The FIT-U is fighting for a national 36-hour strike and a plan of struggle.

We support the presidential candidacy of Del Caño-Del Plá, as well as all the candidacies of the Party of Socialist Workers (PTS), the Workers Party (PO), the Socialist Left (IS), and the Socialist Workers Movement (MST) in all districts of Argentina. It is the only coalition that defends the interests of the working class, women, and the youth.

Editorial Board of Left Voice (U.S)

Committee for a Workers International (CWI)

Manos Skoufoglou, Organization of Communists Internationalists of Greece (OKDE, Greek section of the USFI), member of the Central Coordination Committee of ANTARSYA (Greece)